Gaza wakes up to rubble and funerals after Israeli strikes 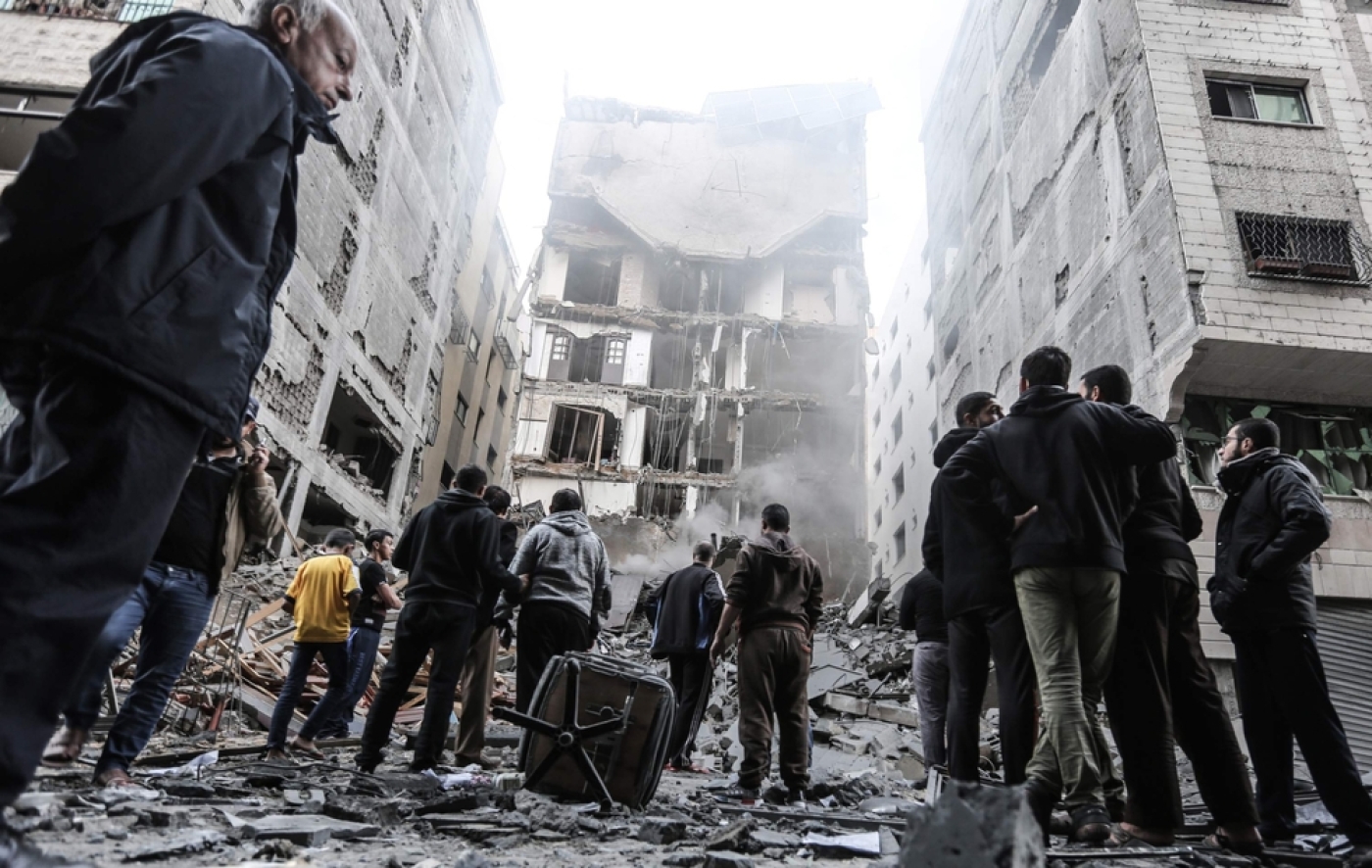 Palestinians look at the rubble of a Gaza City building on Tuesday after an Israeli air strike (AFP)
By
Maha Hussaini
, Mohammed Asad

GAZA CITY – Israeli air strikes killed six Palestinians and destroyed seven buildings on Monday night in what some Palestinians have called “the bloodiest night” since Israel’s offensive on the long-besieged enclave in 2014.

The overnight attacks came after what is widely believed to have been a botched Israeli special forces operation deep into Gaza on Sunday night, which led to the deaths of seven Palestinians, including a Hamas commander, and one Israeli soldier.

'Every time an Israeli attack is launched, journalists and media outlets become a target'

Hamas responded to the incursion late on Monday, launching around 400 rockets into different locations in southern Israel. Israeli media reported that a Palestinian man originally from Hebron was killed in Ashkelon after a rocket landed on a house, while Palestinian media said two people had been killed in the same attack.

Dina Asaad, 27, who lives in the northern Gaza city, said she has not heard "such massive explosions for the past four years".

"Last night was the bloodiest since Israel’s last offensive in 2014. We could not sleep all night as explosions rocked almost every neighbourhood in the Strip," she said. "This looks pretty much like the beginning of the last three attacks [the 2009, 2012 and 2014 wars], one of them even started with assassinating a Hamas leader and continued for several days."

Israeli jets launched strikes on Gaza that lasted for much of Monday night. One of the buildings destroyed was the Hamas-linked al-Aqsa television station, seriously damaging dozens of adjacent houses located in Gaza City’s densely populated Nasr neighbourhood.

Ahmed Harb, a Palestinian journalist who works for the Fatah-linked Kufiyya TV in Gaza, told Middle East Eye that he wasn’t surprised that the station had been targeted.

“Every time an Israeli attack is launched, journalists and media outlets become a target,” Harb said. “Kufiyya TV offered to open its offices and studios for journalists working at the al-Aqsa channel to help them resume the broadcast.

"If Israel targets a media outlet, dozens of others will expose its crimes. They [Israeli authorities] cannot continue to target Palestinian journalists and media and expect us to stay silent.”

The air strikes destroyed four residential buildings owned by four different families - the Breim and Dheir families in the southern Gaza towns of Khan Younis and Rafah, and the Aidi and al-Yazji families in Gaza City.

Their neighbours reported massive damage to their adjacent homes, as drone missiles and then Israeli F-16s targeted the buildings.

Mohammed Qweider, who lives in a house near the al-Yazji building, said more than 200 families were forced to flee their homes temporarily when the building was targeted.

“We heard more than nine massive explosions about five minutes before the al-Fajr prayers, when residents are usually in the streets heading to the mosque,” said Qweider.

“We rushed to the street as our windows broke and dust and smoke filled the house. There were hundreds of people running everywhere and the al-Yazji building was gone.”

The six-floor building, located on al-Wehda Street in the densely populated city centre, held apartments, a kindergarten, offices, and a language training centre.

Qweider once lived in an eight-floor building that was completely destroyed during Israel’s 2014 attack on Gaza. Targeting and destroying residential buildings has been “an Israeli policy for the past four years,” he said.

“About 30 to 40 families are displaced every time Israel targets a residential building. Can you imagine how horrific it is for a child to jump out of bed and rush to the street barefoot because his house is targeted?” Qweider said.

Abu Hamza, the spokesman for the al-Quds Brigades, the military wing of Islamic Jihad which also launched rockets on Monday, said that Israel’s “targeting of houses and public places made the resistance take a decision of escalating the retaliation”.

Israeli F-16s also destroyed al-Amal Hotel in western Gaza City late on Monday, causing $70,000 in estimated damage to nearby stores, according to Hussam Abdu, who sells curtains in one of the shops.

The speaker told us not to talk, and that they are the ones who decide if we evacuate or not. They hung up the phone and targeted the hotel a few minutes later

“I do not know what I will do after we lost our only source of living. I have seven children who I have no clue how I will feed now,” Abdu told MEE.

“There are three other families who lost their source of living due to the air strikes that targeted the hotel. Israeli forces know hundreds of houses and civilian buildings are very near to the hotel, and yet they used missiles that cause severe damage not only to the targeted building, but also to its surroundings.”

Abdu’s cousin Anwar, who lives in a building near the hotel, said that the family received a phone call at 10pm from a private number. The speaker ordered them to evacuate the house, before several air strikes hit the hotel.

“The speaker told us not to talk, and that they are the ones who decide if we evacuate or not. They hung up the phone and targeted the hotel a few minutes later,” she said.

“We could not take anything or put our clothes on. We could barely leave the house before several missiles struck the place.”

As residents attended funerals for those killed and assessed the damage overnight, Palestinian fishermen out at sea were forced back to shore by Israeli gunboats, fisherman and captain Nizar Ayyash told MEE.

The fishermen's syndicate, he said, was told that fishing off the Gaza coast is forbidden until further notice.