Judges stopped short of punishing the far-right leader, who called it a 'political trial' Dutch judges on Friday upheld Geert Wilders' conviction for collectively insulting Moroccan people at a rally, but fell short of punishing the controversial far-right leader, who branded it a "political trial".

The appeals court threw out a charge of inciting discrimination over a 2014 gathering where the peroxide-blond Wilders asked supporters if they wanted "fewer or more Moroccans" and the crowd chanted "Fewer! Fewer!"

The court said his comments were for political gain and had "not intended to encourage his public to do so."

In a politically charged judgment ahead of elections next year, the judges decided not to punish Wilders, saying he had already paid the price because he needs constant personal protection due to death threats over his anti-Muslim remarks.

A lower court had convicted Wilders - whose Freedom Party is the second biggest in the Dutch parliament - of both group insult and inciting discrimination in 2016, but the politician had appealed the verdict.

"The court considers it proven that Mr Wilders is guilty of group insult on March 19, 2014. The court will not impose any punishment or measure on him for this," judge JM Reinking said.

"He is acquitted of the other facts."

Wilders had framed the case as a free speech issue, as he has with previous controversial acts such as a competition for cartoons of Muhammad, the Prophet, but judges rejected his arguments.

"The right to freedom of expression, especially that of a politician, does not preclude conviction in this case," they said.

Wilders reacted furiously after the case, saying he would appeal to the supreme court and warning that opponents such as Prime Minister Mark Rutte "should not cheer too soon".

"The Netherlands has become a corrupt country. Moroccans who set our cities and neighbourhoods on fire usually get away with it," Wilders told reporters outside court.

The far-right leader had said on Twitter ahead of the verdict that it would decide if the Netherlands had "become a corrupt banana-republic."

Wilders lives in a safe house and has been granted 24-hour protection by the Dutch state because of death threats over his anti-immigration and anti-Muslim comments.

His Twitter feed regularly pumps out anti-Muslim comments and drawings, and in 2018, he announced plans for a cartoon competition of the prophet.

The move sparked angry protests among Muslims, particularly in Pakistan, but he cancelled it after receiving threats against his life.

A day after he announced the cancellation, an Afghan man stabbed two American tourists at Amsterdam's main train station. The man, who said he wanted to "protect the Prophet Muhammad", was sentenced to 26 years in jail in October.

However, he remains a key figure in Dutch politics, with Rutte having tacked to the right during the last elections in 2017 in a bid to keep Wilders out of power as nativist parties surged in the wake of the 2016 Brexit vote and the election of Donald Trump. 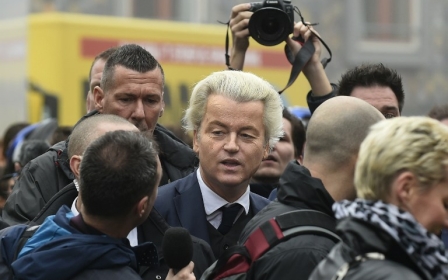