A family lost 150 precious trees in one attack this week, in the latest of a rising trend in the occupied West Bank 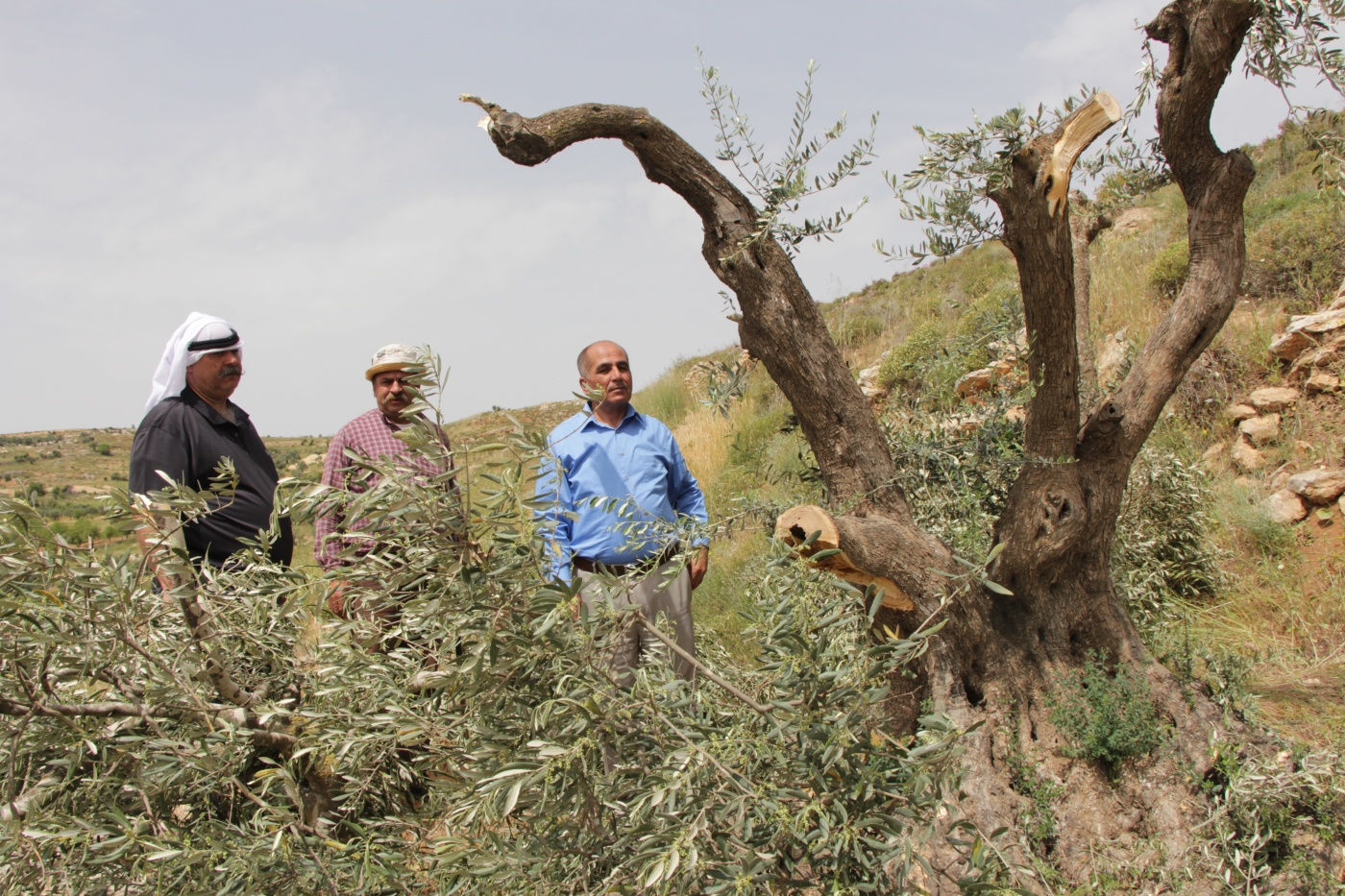 When a local farmer called Sayel Kanaan and told him to rush to his land near the occupied West Bank's Burqa village, Kanaan couldn't imagine the scene he would find.

"Me and my family hurried to our property and found what could only be described as a great massacre," Kanaan told Middle East Eye.

"Roman olive trees with 300 to 500 years of age had been hacked down, as well as the newly planted trees ...  All the trees that we have inherited from our ancestors have been lost."

On Tuesday evening, Israeli settlers had attacked his family's property, slicing through and destroying 150 olive trees and hundreds of years of history.

"We have not experienced a sad day in our lives like this day, which we will continue to live every day until we die," Kanaan said.

The attack followed two days of violent attacks on the family, the latest symptom of increasing settler violence in the West Bank.

On Sunday, Kanaan and his family were ambushed while ploughing their fields next to the Givat Atsaf settlement, which has been taking land from Burqa village since 2000.

Frightened, the Kanaans invited an international solidarity group to accompany them the next day. But the settlers returned nonetheless.

"They started attacking us and throwing stones at us. We tried to confront them with stones as well," Kanaan said.

"The confrontations continued for an hour before we forced them to retreat, then we returned to the village to avoid another attack."

Despite the violence, the Kanaans did not expect the settler attacks on their land to escalate to the point of cutting down all their olive trees.

"The land is a red line that we cannot give up. Keeping it from the Zionist settlers has become difficult, but we will resist and pass it down to our children and grandchildren," said Kanaan, adding that the olive trees the family lost are the main source of income for some 60 people.

This is not the first time settlers have attacked Kanaan's property.

In 2013, settlers torched two vehicles in front of his house, as part of the large-scale attacks on Burqa, which included the burning of a mosque in 2011.

Meanwhile, last year, attackers wrote racist slogans calling for the killing and expulsion of Palestinians on the walls of the village's houses.

Since 2014, settlers have stepped up their attacks in the West Bank, particularly in designated Area C, which is controlled directly by the Israeli military.

According to the United Nations Office for the Coordination of Humanitarian Affairs (OCHA), settler attacks in the first four months of 2018 increased significantly from the previous year by 50-62 percent.

This included destroying 900 trees. According to a report by the Israeli Information Center for Human Rights in the Occupied Territories indicates, 10 settlers attacks on Palestinian land documented between May and July 2018 saw the destruction of over 2,000 grape vines and trees.

Ghassan Daghlas, the Palestinian Authority official charged with monitoring settler activity in the northern West Bank, told MEE that destroying olive trees is one of the means used by the settlers to try and empty Area C of Palestinians.

It causes not only psychological harm, but also the loss of his source of livelihood

He said last year the PA documented 7,000 trees cut down by settlers. Another 3,000 have been destroyed so far this year.

"The most difficult thing the farmer goes through is the settlers' attack on the olive trees, because it causes not only psychological harm, but also the loss of his source of livelihood," he told MEE.

"Nothing can compensate for a tree he inherited from his ancestors, or planted dozens of years ago."

Adnan Salim, a farmer and activist in the La Via Campesina, a group that describes itself as an international peasants movement, said the constant settler attacks affect the steadfastness of farmers who spend considerable effort making their land productive.

"The olive tree is fundamental to a Palestinian's life, he was raised to maintain it. When a Zionist settler from another country comes and cuts it off, it destroys us psychologically," he said.

"Cutting trees is used to confiscate land and annex it to settlements.

"We are living a struggle of will between an occupier and the people who fight for their homeland," he added.

Israeli courts rely on an old Ottoman law that enables them to control Palestinian land if it is documented that the land has been abandoned for three years. 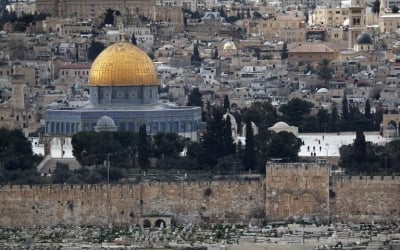 The head of the international relations and information unit of the Colonisation and Wall Resistance Commission, Yunis Arar, told MEE that the notorious "price tag" settlers, who are known for their attacks on Palestinians, are behind the destruction of trees and are protected by the Israeli army.

"Olive trees, just like houses, give legal protection to the land so settlers cannot capture it. Cutting them down is a strategy to remove this protection," he said.

He added that the legal department in the commission raised 3,200 cases against the confiscation of land and real estate in Israeli courts, pointing out that they are able to provide aerial photos to prove that the land is permanently occupied and not abandoned, as alleged by the Israeli authorities.

In the fields, Palestinians are carrying out forestation campaigns in land under threat of confiscation.

Last year, it launched a campaign called "Plant seeds in Area C," aimed at compensating for trees uprooted or felled over the previous two years.

The group managed last year to plant thousands of trees in the territory adjacent to the settlements under the threat of confiscation.

"These campaigns aim to support Palestinian farmers and to tell them that they are not alone," Abu Saif said.

"The second aim is to emphasise that there is a strong Palestinian will and well-built Palestinian project for maintaining the land and protecting it." 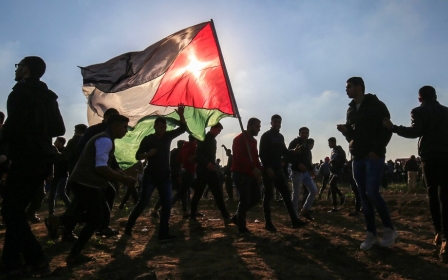 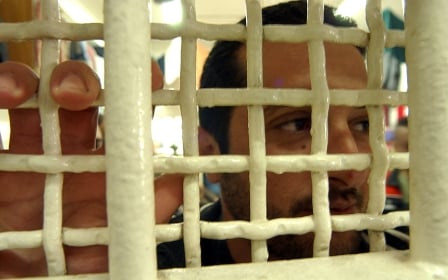 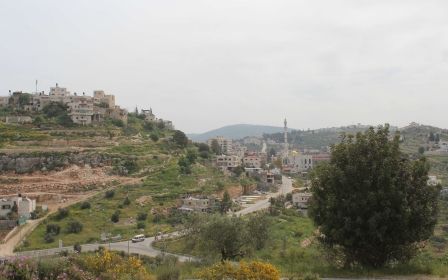