The UAE has denied that it was involved in hacking the Qatari news sites, which sparked Saudi-led blockade of Doha Qatar said it believed a media report citing US officials had revealed the responsibility of the United Arab Emirates in an alleged hack on its state news agency, branding it a violation of international law.

"The information published in the Washington Post... revealed the involvement of the United Arab Emirates and senior Emirati officials in the hacking of Qatar News Agency," its government communication office said in a statement.

The report "unequivocally proves that this hacking crime took place," it added.

The UAE's foreign minister, Anwar Gargash, said earlier on Monday that the Washington Post report was false and denied his country's involvement in any hack.

In an uncompromising speech at London-based think tank Chatham House, Anwar Gargash said he understood the severity of the "clearly very, very harsh" campaign against Doha, but added "we said this needs a wake-up call for somebody who did not accept in 2013, 2014 [a] normal diplomatic solution".

The Emirates, along with Saudi Arabia, Bahrain and Egypt, have cut off all transport and diplomatic ties with Qatar last month and accused the tiny Gulf nation of harbouring figures associated with the Muslim Brotherhood and allying with regional foe Iran.

Qatar has rejected their 13 demands which include the shuttering of Qatar's flagship Al Jazeera network and the closure of a Turkish airbase because it would violate its sovereignty.

Gargash moved to deny reports the UAE had orchestrated the hack of Qatar's state news agency which helped spark the diplomatic rift.

"The Washington Post story today that we actually hacked the Qataris is also not true," he told the London-based think-tank Chatham House.

Gargash also gave a strong hint that the Gulf states may expel Qatar from the Gulf Co-operation Council, the regional trade and security group.

Gargash rebuffed claims that the four allies have miscalculated, and said that Doha had already made concessions by privately agreeing to review the list of 59 so-called "extremists" the UAE claims are in Doha.

The foreign minister also hailed Qatar's decision to sign a memorandum of understanding on terrorist financing with the US as a "positive development".

In a heated exchange with a journalist from Al Jazeera, Gargash said that he had detailed instances of Al Jazeera "giving credence to claims that are jihadist" in a letter to the UN special rapporteur on freedom of opinion and expression who claimed earlier this month that demands to close the network were a "major blow to media pluralism".

Pressed on whether the closure of the channel was still a demand, he said: "It's a negotiatiing plank we need to sit together and we need to agree.

The speech will do little to assuage the fears of world leaders who have sought to mediate the crisis. France, Germany, Britain and the US have, in recent weeks, warned that the crisis could scare off investors and damage long-term stability.

"Understandably many of our friends in Europe and beyond are concerned about this crisis," Gargash said.

"They see the Arab Gulf as a haven of stability in an unstable Middle East, and as an important and functioning common market. Many would argue that it is one of the few Arab bulwarks against further Iranian expansion. We understand and respect those concerns.

"But as we know from meetings with American and European officials, they are also aware of Qatar's duplicity." 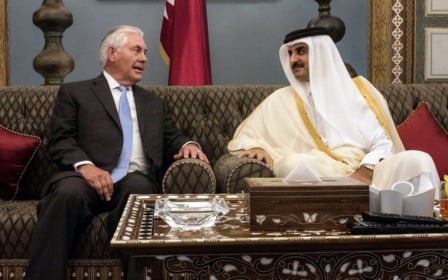 Media
Arabic press review: UAE on the march, Qatar siege on the wane