Before his appointment as the head of the CIA, John Brennan suggested that the US tone down its rhetoric on Iran and appoint Colin Powell as a new presidential envoy, according to emails released by the Wikileaks.

In an apparent unfinished 2007 draft document titled the "Conundrum of Iran", Brennan said that the administration of George W Bush had been guilty of “gratuitous labelling” of Iran as part of the “axis of evil”, and said that the next president must work with whomever was in power in Tehran to secure Middle East peace.

The document was written by Brennan while he was advising Barack Obama on foreign policy issues during his first run for president. After Obama's election in 2008, Brennan was appointed head of homeland security, and later director of the CIA.

The CIA on Wednesday condemned the Wikileaks release, saying the information was "plundered with malicious intent" from a private family account.

Wikileaks said the document was written for Obama to launch a new detente with Iran, and engage in direct dialogue given Tehran's strategic importance to the US and to stability in the Middle East.

"The United States has no choice but to find a way to coexist - and to come to terms - with whatever government holds power in Tehran," it said.

The document states that the US should appoint an envoy to Tehran, and offered Powell as the most appropriate choice, as well as former secretary of state Madeleine Albright and former vice president Al Gore.

"Experience has shown that seemingly intractable foreign policy challenges for the United States have been best handled by the appointment of a Presidential envoy who has the experience, gravitas, and the authority to deal effectively not only with non-US interlocutors but also with US officials who have the potential to stand in the way of progress. The appointment of a US presidential envoy to Iran is long overdue," the draft document said.

However, the recommendations for the new position were tarred by their history in the Middle East. Powell, a first Gulf War general and Bush's secretary of state, backed his administration's push for war in Iraq, telling the UN security council in 2003 that there was "no doubt in my mind" that Saddam Hussein was attempting to obtain nuclear weapons.

Albright caused controversy when she said in 1996 that the deaths of half a million Iraqi children due to sanctions on Saddam's regime was "worth it".

Nevertheless, the leaked draft offered a change to the Bush years, saying that an "unfortunate hallmark of US-Iranian relations since 2001 has been growing divide, chronicled by bombastic rhetorical broadsides that have been hurled publicly by each side against the other".

It said "all-encompassing rubric of 'the global war on terrorism' lead to "the gratuitous labelling of Iran as part of a worldwide 'axis of evil' by President Bush... combined with strong US criticisms of Iran’s nascent nuclear programme and its meddling in Iraq led Tehran to the view that Washington had embarked on a course of confrontation in the region that would soon set a kinetic focus on Iran." 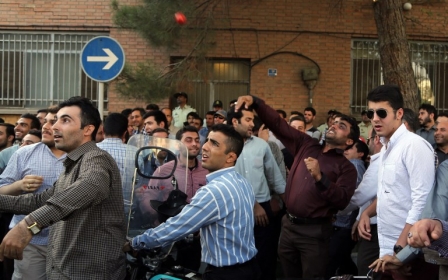