In a televised speech, Hadi said he would ensure that "the Yemeni republic flag will fly on the Marran mountain in (the northern Houthi stronghold) Saada, instead of the Iranian flag."

"The Iranian twelver (Shiism) pattern that has been agreed upon between the Houthis and those who support them will not be accepted by Yemenis, whether Zaidi (Shiites) or Shafite (Sunnis)," he added.

It was the first televised speech by Hadi since he fled house arrest in militia-held Sanaa last month and resurfaced in Aden which he declared the temporary capital.

Tehran is accused of backing the Shiite militiamen who seized Sanaa in September, but the Houthis insist that Iran does not meddle in Yemeni affairs.

The Houthi-run Saba news agency reported last week that Iran will supply Yemen with crude oil for one year, and also establish a 165-megawatt power plant.

The agreement was made during a Houthi visit to the Islamic republic after an Iranian commercial flight landed in Sanaa earlier this month - the first in many years and the fruit of an aviation accord with Tehran.

Saudi Arabia, Iran's arch-rival in the Gulf, is a strong backer of Hadi.

On Friday, Hadi said that the suicide bombings that killed at least 142 people at mosques were aimed at dragging the country into "chaos, violence and internal fighting".

The Islamic State (IS) group claimed responsibility for Friday's attacks on two mosques in the capital Sanaa and the Houthi militia's northern stronghold of Saada.

Hadi has taken refuge in the southern city of Aden having escaped house arrest in the Houthi-controlled capital last month.

In a letter to the families of the victims, which also included 351 wounded, he condemned the attacks as "terrorist, criminal and cowardly".

"Such heinous attacks could only be done by the enemies of life," who want to drag Yemen into "chaos, violence and internal fighting," said the letter released by his office late on Friday.

The Houthis seized Sanaa in September, and have since tightened their grip on government installations, aided by forces loyal to former president Ali Abdullah Saleh.

On Thursday, Hadi accused what he described as "agents backed by Iran" of attempting to stage a coup against him in the southern province of Aden, which he has declared the temporary capital of Yemen while the Houthis still control Sanaa.

Hadi said Aden's forces had succeeded in foiling a bid by these "agents" to stage a coup in Aden by occupying the airport of the southern province.

"The success to thwart this cheap attempt reflected the unity between the army, policemen and vigilantes," Hadi said in a statement.

He said attacks on the airport of Aden and airstrikes against the presidential palace in the southern province on Thursday revealed that the "other side" did not want to reach a settlement to the crisis in Yemen through dialogue, implicitly pointing the finger at the Shiite Houthi militia. 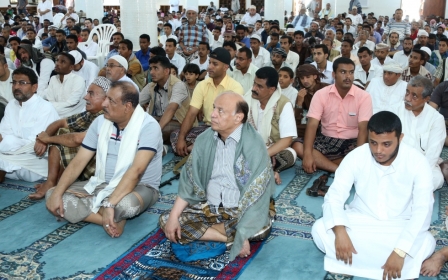 Inside Yemen
Hadi: Bombings seek to drag Yemen into 'chaos' Inside Yemen
IS aims to eclipse al-Qaeda with Yemen attacks, say analysts