Senior Hamas leader Ismail Haniyeh, gives a speech during Friday prayers in Gaza in May 2015 (AFP)
By
MEE staff

Hamas has rejected the announcement by Palestinian authorities in Ramallah that the unity government would be dissolved before the end of today.

"Hamas rejects any one-sided change in the government without the agreement of all parties," Hamas spokesman Sami Abu Zuhri told AFP on Wednesday morning.

"No one told us anything about any decision to change and no one consulted with us about any change in the unity government. Fatah acted on its own in all regards."

On Tuesday evening, several senior officials said that Mahmoud Abbas told members of his Fatah party that the Palestinian unity government step down within 24 hours. No explanation was given for the dissolution, although rising tensions with Hamas-ruled Gaza are widely believed to be behind the rift.

The announcement was made as Israel and Hamas have been holding separate but indirect talks on how to rebuild Gaza and enact a lasting ceasefire after last summer’s 50-day war with Israel.

"We don’t know [when the deal is expected]. It could be hours, days or even longer," Mkhaimar Abusada, a professor of Political Science at al-Azhar University in Gaza told MEE.

"But there was an indication by the military wing of Hamas they have a picture of a clock in front of one of their prisoners serving multiple life sentences and he is pointing to the clock in a way saying that the time is coming and the clock is ticking. There will be a prisoner exchange deal. If we get this, we could get a serious deal with a truce. We are very close to."

A Palestine Liberation Organisation official told AFP the government of technocrats formed last year to replace rival administrations in Gaza and the West Bank would likely be replaced with a government of politicians. The official, who requested anonymity, said that the cabinet’s dissolution was due to the fact that it had not been able to operate in Gaza.

“It will be [dissolved] sometime today," the PLO official said.

“Abo Mazen [Palestinian President Mahmoud Abbas] said that he will resign the government in the next 24 hours. So we are waiting and expecting that he will do this in the next couple of hours but he gave no explanations as to why," MEE contributor Mohammed Omer on the ground in Gaza said via telephone.

“It could be that Abu Mazen is not happy with the deal that Hamas is trying to strike in terms of reconstruction and easing of the blockade and that he worries Hamas is trying to create a three tier Palestinian state. Or it could all be part of a bigger PA game, but we will begin to understand more over the coming hours as more information begins to come out.”

The Tuesday announcement was greeted with shock by the consensus government which said it had not been informed of the deal.

"We had a meeting today and we didn't discuss this issue," Ihab Bseiso, spokesman for the consensus government, told AFP late on Tuesday.

According to the Palestinian news agency Maan, the new government will take "several days" to form.

An official in the president's office said Abbas would meet Prime Minister Rami Hamdallah at midday local time (0900 GMT) on Wednesday, although so far no news has emerged as yet about the meeting.

The Fatah-led PA and the Gaza-based Hamas movement signed a reconciliation agreement last June that nominally ended some seven years of division between the rival political factions.

Prior to the agreement, Hamas led a separate government in the Gaza Strip, and due in part to the unity deal's failure to make significant changes on the ground in Gaza, Hamas remains the de facto ruler of the coastal enclave. 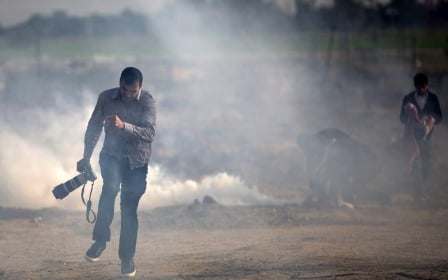