Israel unleashed its biggest air strikes on the Gaza Strip since a 2014 war on Saturday, killing at least two Palestinians, while dozens of rockets targeted Israel, but Hamas said a ceasefire had been reached late in the day.

The Palestinian Islamic Jihad group said in a separate statement that a truce had been reached. The group said Egyptian mediation efforts had succeeded in brokering a truce ending an intense day-long round of violence, the Associated Press reported. The exchange of fire followed months of tension that raised the prospect of a fourth war in the blockaded Gaza Strip since 2008.

It was unclear whether the truce would hold. Several hours after the announcement, the Israeli military said Palestinians fired two mortar bombs towards Israel and that it struck the weapon used in the attack in the southern Gaza Strip. There were no immediate reports of casualties.

The two Palestinians killed were identified as Amir al-Nimra, 15, and Luay Kahil, 16, caught by an Israeli strike on a building near them in western Gaza City, the enclave's health ministry said. Twenty-five people were wounded across Gaza, the ministry said.

The ministry stated on Sunday morning that a Palestinian father and son - identified as Ahmad Mansour Hassan, 35, and Luay Ahmad Hassan, 13 - had been killed in Gaza City, although it did not specify whether it was as a result of Israeli military action.

Hamas spokesman Fawzi Barhoum said late on Saturday that the Islamist movement, which is the de facto ruling party in the Gaza Strip, had agreed to an "Egyptian offer to return to a ceasefire to stop this escalation".

An Israeli military spokesman declined to comment other than saying its actions would depend on what happens on the ground. A spokesman for Israeli Prime Minister Benjamin Netanyahu did not respond to a request for comment.

The surge in violence followed mounting public criticism of Netanyahu over failure to counter a new Palestinian tactic: incendiary kites and balloons launched from Gaza that have burned crops and scrubland in southern Israel.

The Israeli military said that on Saturday about 100 rockets were launched from Gaza at southern Israel.

Some of the projectiles were intercepted by Israel's Iron Dome system, but police said three people had been wounded in the southern town of Sderot.

"After consultations with the defence minister, the chief of staff and Israel's top defence officials, we decided on powerful action against Hamas terrorism," Netanyahu said in a video statement.

"The Israeli armed forces delivered the strongest blow against Hamas since [the 2014 Gaza war] and we will increase the intensity of our attacks as necessary."

Intelligence Minister Israel Katz said the Israeli attacks should not be seen as the start of a military campaign against the Palestinian territory of two million people, devastated by seven weeks of war with Israel four years ago, as well as two other devastating conflicts in 2009 and 2012.

"We are not in a [military] operation. The activity we are engaged in now sends a message that Israel will not tolerate rockets, explosive devices, mortar bombs or [incendiary] kites," Katz said on Israel's Channel 12 TV.

"The action we are taking draws a clear red line: that from now on, we will not allow this," he said.

Palestinians in Gaza have been participating in the Great March of Return since 30 March, calling for an end to the 11-year Israeli-led blockade on Gaza and for Palestinian refugees' right of return to the lands that their families fled during the establishment of the state of Israel in 1948, in what Palestinians call the Nakba (catastrophe).

Israeli authorities have blamed Hamas for the Great March of Return, an allegation that the campaign's organisers have rejected, and accused the ruling party in Gaza of being behind incendiary kites flown across the fence separating Israel from Gaza that have sparked fires in Israel.

Since protests began along the fence at that time, at least 139 Palestinians have been killed by Israeli fire within the scope of largely peaceful demonstrations, according to the Gaza Health Ministry.

No Israelis have been killed. However, the Israeli army said one soldier was wounded by a grenade on Friday.

Meanwhile, the Gaza health ministry said that 220 Palestinians were hurt in Friday's protests near the fence, in addition to two - Othman Rami Hales, 15, and Mohammed Nasser Shurrab, 20 - who were shot dead. 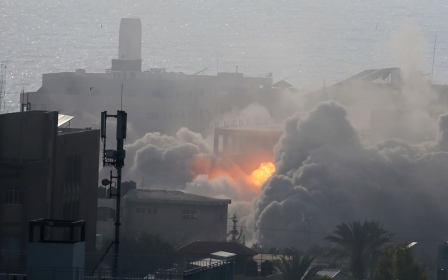