'Hands off Ilhan': Black women rally in support of US congresswoman 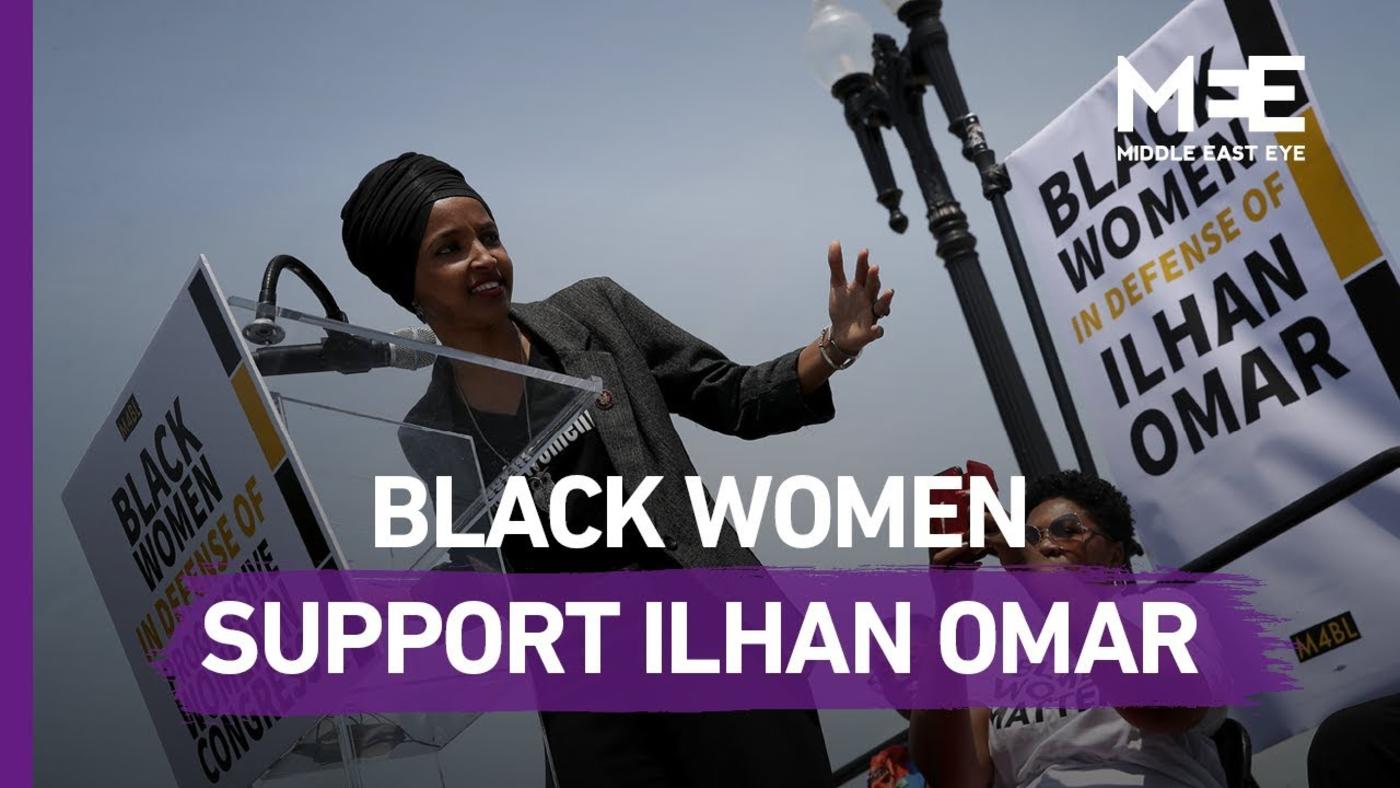 'We collectively must make sure that we are dismantling all systems of oppression,' Omar said (Reuters)
By
Ali Harb
in
Washington

As chants of "We love you" grew louder, Ilhan Omar couldn't hold back her tears.

One of the first two Muslim women ever elected to the United States Congress, Omar has become a target in her early months in Washington, with Israel supporters and Republican politicians frequently attacking the Democrat from Minnesota.

Yet in the face of those attacks, on Tuesday, dozens of women from the Movement for Black Lives, a coalition of African-American advocates, gathered in front of the Capitol Building in Washington to express solidarity with Omar.

And the congresswoman was visibly moved.

"The thing that upsets the occupant of the White House, his goons in the Republican Party [and] many of our colleagues in the Democratic Party," Omar told the crowd, "is that they can't stand that a refugee, a black woman, an immigrant, a Muslim, shows up in Congress thinking she's equal to them."

Omar first stirred outrage earlier this year when she said support for Israel in the US is driven by AIPAC's reach in Congress, remarks that were viewed by some as invoking an anti-Semitic trope.

Thereafter, Omar's critics appeared to scrutinise every word she said.

And that pressure eventually led to a tweet by President Donald Trump this month linking the congresswoman to the 9/11 attacks, after she was accused of downplaying the tragedy.

In a brief speech on Tuesday, African-American civil rights activist and scholar Angela Davis denounced the "logic of scapegoating" coming out of the White House.

Davis said the campaign against Omar is not only aimed at the congresswoman, but is designed to dissuade politicians and activists from speaking out on certain issues, including justice in Palestine.

"'Be quiet or you will suffer the fate of Ilhan Omar' - that is the message," said Davis, who has faced allegations of anti-Semitism, and criticism for expressing solidarity with Palestinians and advocating for their rights.

Miski Noor, an organiser from Minnesota, told Middle East Eye after the rally that some of the criticism levied at Omar is driven by hatred of the various elements of the congresswoman's identity.

But Omar's courage to take a stand on unpopular issues is also part of what has made her a target, Noor said.

'I say hands off, hands off the women of colour who serve in the United States Congress'

"There are people, because of their white supremacist and racist views of the world, hate her because of her identities and based on fear," she said.

"At the same time, we know Ilhan is being attacked because of the content of what she's saying."

Ayana Pressley, a congresswoman who, like Omar, was elected in the 2018 midterms, was one of two other Democrats who also attended Tuesday's event.

"Hands off Ilhan," she told the crowd.

The first African-American congresswoman elected from Massachusetts, Pressley hit out at members of her own party who refused to stand alongside Omar during the recent attacks against her.

She said it was hypocritical for Democratic lawmakers to say they support refugees and immigrants in their electoral districts, while failing to protect Omar in their own caucus.

Pressley added that the "silencing of Black women" is no longer acceptable.

"This is a reckoning. This is us assuming our rightful place, as the table-shakers, as the truth-tellers, as the justice-seekers, as the preservers of democracy," she said.

Tlaib, who is Palestinian American, has also often been the target of accusations of anti-Semitism because of her support for Palestinian rights. Both Tlaib and Omar have rejected that allegation, saying the goal is to end the debate around the Middle East conflict.

In her speech on Tuesday, Omar drew a link between Islamophobia and anti-Jewish hatred, calling them "two sides of the same coin of bigotry".

"The occupant of the White House and [his] allies are doing everything that they can to distance themselves … from the monster that they've created that is terrorising the Jewish community and the Muslim community," she said, referring to white supremacy.

Indeed, after a deadly shooting in a synagogue in California by a white nationalist militant who had reportedly attempted to burn down a mosque last year, some Republican lawmakers appeared to blame Omar for the attack.

"I can't ever speak of Islamophobia and fight for Muslims if I am not willing to fight against anti-Semitism," Omar said.

"We collectively must make sure that we are dismantling all systems of oppression." 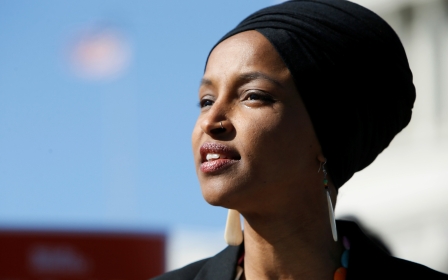 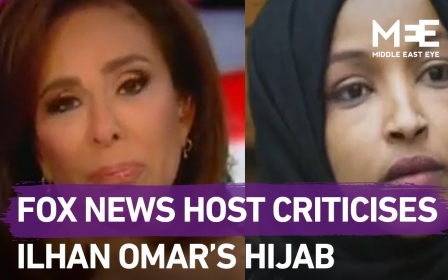