Two other Palestinians were shot dead on Friday, including a 41-year-old man in the Gaza Strip and a 55-year-old man near Hebron city HEBRON, Occupied West Bank - Thirteen-year-old Mohammed Irshied thought his older brother had only been shot in the leg when he arrived alone to the hospital and asked for his brother’s room number.

“The police officer at the front just looked at me and said 'your brother isn't in a room, he's a martyr now,'” Mohammed told Middle East Eye a few hours later at the mourning hall where friends and family were gathering to show their respects for the young man.

It's the second time in less than two months that Mohammed has found himself in the same hall mourning a sibling. Israeli forces shot Ouday Irshied, 24, in the chest and leg during clashes in Hebron city on Friday, killing him just six-and-a-half weeks after his sister Dania Irshied, 17, was shot dead at the same city-centre.

Mohammed is now the oldest of his four remaining siblings. He and his brother spent most of their time together. At home they shared a room, and together they ran the family's small bakery in the centre of town. Dania, he said, was his oldest sister and took care of him like a mother.

“Of course I miss them, but I don't feel so sad because I know they are martyrs in heaven now,” Mohammed explained.

Jihad Irshied, the boys' father shakes his sadly, “that is what every kid here will say,” he said.

“The future is so bleak for them, they are oppressed here so much and they have so little hope that all the young people you speak to say they aren't scared to die, they're all dreaming to be martyrs - just go ask the kids,” Jihad said, motioning towards a groups of young boys gathered to the side of Mohammed. “It's not that they don't love life, they just don't see any life for themselves.”

The mourning hall was packed with nearly 400 people, some of them family members of the other 118 Palestinians shot and killed by Israeli forces since the start of October.

Jihad was at a gathering for family members of those killed whose bodies have not been released by Israeli authorities when he found out his son was dead. A few hours later, roles had reversed and he became the one greeting mourners.

“I'm just so thankful they aren't holding either of my children in a refrigerator like some of our martyrs,” Jihad said, his voice always seemingly on the edge of breaking, but without shedding a single tear.

His daughter's body was released by Israeli forces five days after her death, along with seven others, following several protests in Hebron against the policy of withholding the bodies of Palestinians accused of attacks.

Ouday is expected to be buried near his sister Dania in Hebron's Marytrs' Cemetery.

“Ouday was heartbroken when Dania was killed,” his father said. “He was her older brother and she was the closest in age to him from all his siblings, anyone would be, but he wasn't looking to die.”

Jihad said Ouday was engaged and in the middle of building a house before his upcoming wedding. Ouday, like most single young Palestinians his age, attended protests in his area frequently, but his father said he was not overly political, and would have stopped going to clashes once he was married and starting a family.

“He was a normal kid, he loved life, even with all the hardships that come with living here,” his father said.

Around 30 percent of Palestinians shot dead by Israeli forces since the start of October have been from the southern occupied West Bank district of Hebron.

Ouday’s uncle, Jawad Irshied, said that the people in Hebron have a more “hopeless existence” than other communities in the West Bank.

“We are surrounded here by Israeli settlers, and checkpoints and closed neighbourhoods. Life is always some sort of struggle in Hebron,” Jawad said, motioning to Jihad. “Can you imagine? My brother has lost two of his children, of course I’m sad for the loss of my niece and nephew but what I’m feeling can’t come close to what their mother and father are going through.”

Jihad bowed his head and ran his hands over his face. A pin of his daughter, Dania, next to the Al-Aqsa Mosque was stuck dead centre to his chest. The pin reads “father of the martyr” in Arabic.

While Dania was shot dead by Israeli forces in what Israeli authorities have said was an attempted stabbing attack, video footage of the incident has lead many to question the validity of those claims.

In a statement released on 27 October, Amnesty International said it found that Dania’s killing was “absolutely unjustified.”

“Even if Dania [Irsheid] had a knife in her possession, eyewitness accounts indicate she was not posing a threat to Israeli forces when she was shot, and her killing is therefore absolutely unjustified,” the statement said.

Amnesty International added that it had gathered numerous other pieces of evidence that suggest that Israeli forces have used “unwarranted lethal force in what were likely extrajudicial executions.”

No Israelis were injured in any of the incidents mentioned in this article. 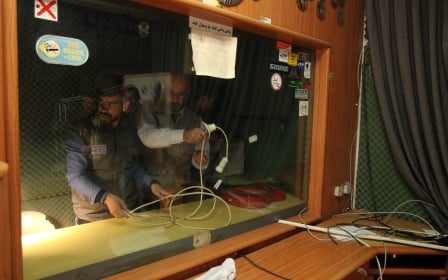