In a dawn raid on the al-Ahli Hospital in Hebron, an elite Israeli unit kidnapped one patient and killed his cousin

An elite Israeli unit raided a hospital in Hebron at dawn on Thursday and killed a Palestinian related to a man who allegedly carried out a stabbing attack last month, Palestinian and Israeli sources said.

The raid on the al-Ahli Hospital, which involved more than 20 undercover agents disguised as Palestinians, occured at 2:45am local time (1:30 GMT).

Known in Arabic as musta’ribeen, the agents are trained by specialists to act like Palestinians and to speak their accent.

"Abdallah Azzam Shalaldeh, aged 27, was killed by a unit of (undercover agents) at the Hebron hospital," said the Palestinian health ministry official.

The director of Hebron's al-Ahly hospital, Jehad Shawar, told Palestine Radio that between 20 and 30 men arrived at the clinic in two mini vans. They entered with someone pretending to be pregnant.

"They held the staff at gunpoint and stormed the room of Shalaldeh," Shawar said.

However, Palestinian eyewitnesses told local media that Shalaldeh, a former prisoner in Israeli jails, was shot five times at point blank range as he was coming out of the bathroom.

Witnesses at the hospital reported how the undercover unit entered Shalaldeh's room, where he was recovering from wounds after he was shot by an Israeli settler last month, and immediately tied his brother Bilal's hands up to the bed. Bilal was staying with Shalaldeh.

Caption: The martyr Abdullah Shalaldeh who was executed by Israeli forces this morning in Hebron

"As soon they entered the room, they tied me to the bed," Bilal told Reuters TV. "(Abdullah) was inside the bathroom and wanted to wash for prayer. As he was exiting the bathroom, one of the undercover men shouted at him to stop and they opened fire."

"He remained on the ground bleeding and they hit my brother on his head and took him away."

CCTV footage from the hospital showed the musta'ribeen walking down a corridor with Azzam, 20, in a wheelchair.

On 25 October, eyewitnesses told Ma'an News Agency that Shalaldeh was harvesting olives when an Israeli settler allegedly shot him in the head and chest.

Israeli security sources, however, say that Shalaldeh - whom they claim is "from a family of Hamas militants" - attempted to carry out a stabbing attack near the West Bank settlement of Merzad, near Hebron, injuring one settler, and was trying to flee when he was shot.

In a press statement after the incident, the Palestinian Authority Health Minister Jawad Awwad appealed to international human rights organisations to protect health facilities and their patients from the "aggression" of the Israeli occupation.

Yet many Palestinians on Thursday have expressed frustration with the absence of PA security forces at the hospital and have questioned, given the security coordination between Israeli and Palestinian security forces, whether the PA would have had knowledge of the raid.

Caption: Of course the [PA] security forces are unable to station one or two security at hospitals! I'm not going to say anything else about them

On Thursday, thousands attended Abdullah Shalaleh's funeral in his village of Sa'ir. Protests against Israeli forces broke out after the burial, and 18 year old Abdullah Shalaleh was shot four times in the back near the Beit Einun junction.

Last week, musta’ribeen were embedded in a Palestinian protest in Bethlehem before they turned against the protesters and pulled out their concealed handguns at them.

The death toll since the beginning of October as Israeli-Palestinian violence escalated now stands at 81 Palestinians and 10 Israelis. 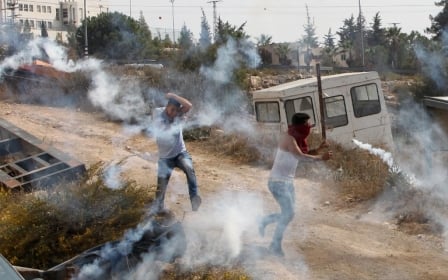