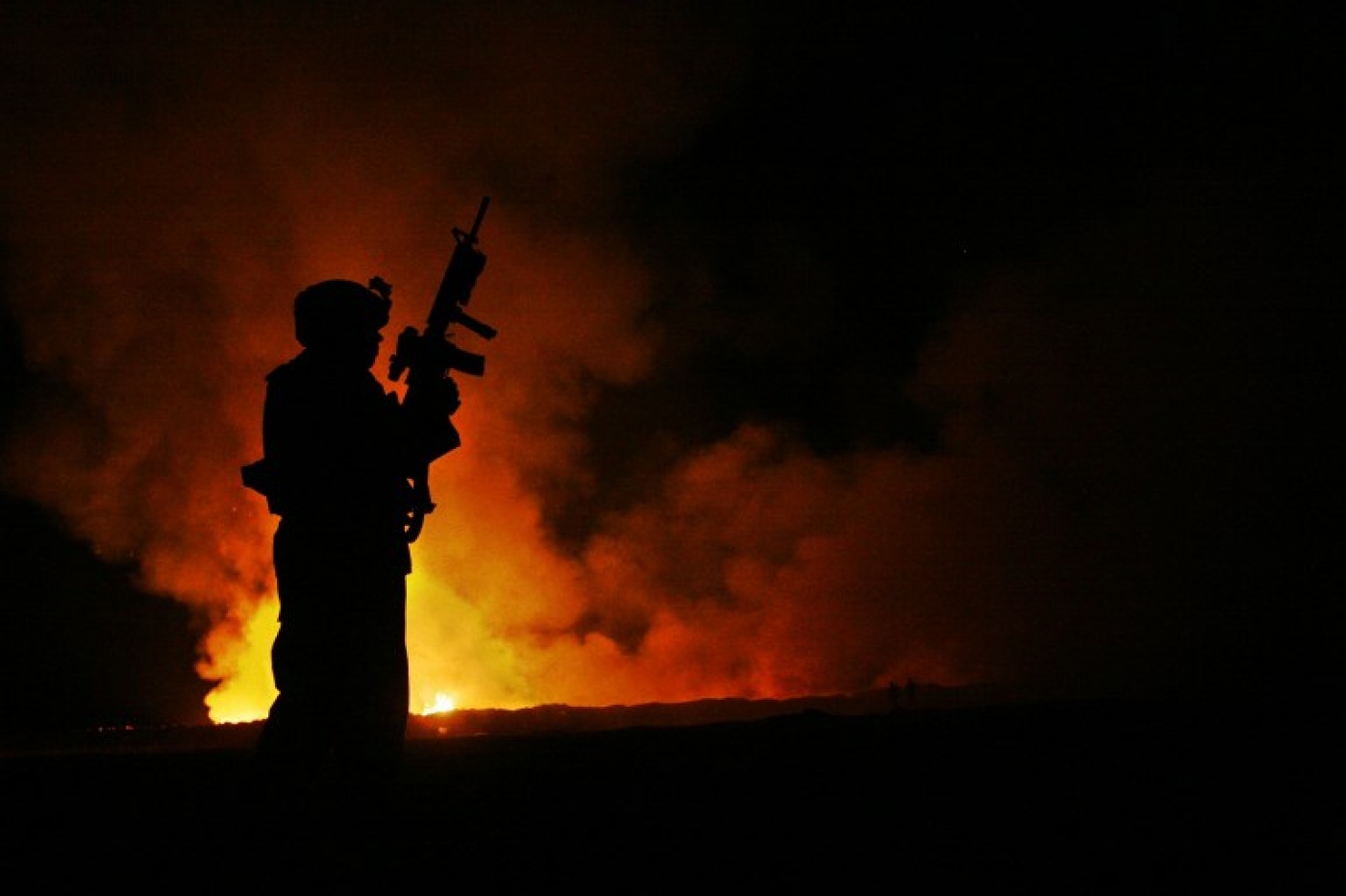 A US Marine in the Iraqi city of Fallujah in 2008. According to a former Bell Pottinger employee, the PR firm produced fake al-Qaeda videos which American soldiers dropped in the streets while on patrol (AFP)
By
Simon Hooper

The head of a Home Office communications team and staff at a media consultancy responsible for promoting the British government's Prevent strategy previously worked for a PR company tasked by the US military to deliver "black ops" propaganda in Iraq, Middle East Eye can reveal.

Richard Chalk was appointed head of the Research, Information and Communications Unit (RICU), part of the Home Office's Office for Security and Counter-Terrorism (OSCT), in 2012 as part of efforts by the government to revamp its counter-extremism communications strategy.

Prior to joining RICU, Chalk worked in Baghdad between 2005 and 2006 for Bell Pottinger, the British PR firm revealed on Sunday by the Bureau of Investigative Journalism (BIJ) and the Sunday Times newspaper to have earned hundreds of millions of dollars from the US Department of Defense during the American military occupation of Iraq.

Others with past links to both Bell Pottinger and communications campaigns in Iraq work for Breakthrough Media, the production company behind many RICU-backed counter-extremism products.

Scott Brown, a director at Breakthrough Media, worked as part of Bell Pottinger’s team in Baghdad in 2006.

He told MEE he did not know the full scope of the company's work in Iraq because he was there for a "short period of time in a very junior admin role".

Breakthrough Media’s director of research and strategy is Andrew Sharples who worked as a campaign manager for Bell Pottinger in Iraq in 2010.

Sharples' biography page on Breakthrough’s website says that he “worked closely with the US Army and DoD [Department of Defense] to develop and implement campaigns designed to counter violent extremism and terrorism”.

“In 2012, Andrew drew on this experience to support the development of a new counter-terrorism strategy for the British government that continues to this day,” his biography continues.

The firm also has an office in Baghdad, where Brown told MEE the company had been subcontracted by another agency to work on a video project which he described as a "community engagement piece about positive human interest stories".

Brown told MEE that Breakthrough Media was not involved in producing any content along the lines of the material the BIJ alleged Bell Pottinger had produced in Iraq.

"We make video content for the consumption of audiences around the world in different formats," he said. "It's mainly in keeping with any UK or international production company that does this stuff."

He said he had crossed over very briefly with Chalk in Iraq, and that Chalk had been part of the management team, while he had been in an administrative role.

'No Arabic word for democracy'

Bell Pottinger started working in Iraq in 2004 when it signed a $5.6m deal with the US-led Coalition Provisional Authority to promote democracy in the country.

At the time, Lord Bell, the then-chairman of Bell Pottinger, told PR Week magazine: "There is no Arabic word for democracy – they use the word ‘democratier’, which is not Arabic. It is certainly a very big comms challenge. It is not going to be easy but it will be rewarding."

The BIJ's investigation covered the period between 2007 and 2011 when it said Bell Pottinger was paid $540m in total by the US Department of Defense for “information operations and psychological operations”.

According to a report in the Guardian newspaper, Chalk was appointed to head RICU because of his experience in Iraq where he had contributed to "information operations" aimed at undermining militant groups opposed to the occupation.

"Under Chalk’s leadership, RICU began communicating with British Muslims in a manner more reminiscent of counter-insurgency operations than a traditional public information campaign: disseminating messages through the use of subterfuge," the Guardian said.

According to a former employee who spoke to the BIJ, Bell Pottinger's output for the US military included the production of fake al-Qaeda videos which were then copied onto CDs and dropped in the streets by American soldiers while they were on patrol.

The CDs also contained a code linked to a Google Analytics account which allowed those with access to track where the CDs were being played. The information was then used to identify potential militants.

One former military contractor spoken to by the BIJ described such false attribution media operations as "black ops" and said they were "pretty much part of the industry toolkit".

Lord Bell, who quit Bell Pottinger last year, told the Sunday Times newspaper: “It was a covert military operation. It was covered by various secrecy documents. We were very proud of it. We did a lot to help resolve the situation. Not enough. We did not stop the mess which emerged, but it was part of the American propaganda machinery.”

Middle East Eye reported in May on accusations that RICU was running a “covert propaganda campaign” intended to project its counter-extremism message to British Muslims through ostensibly “grassroots” community organisations.

Much of RICU’s work remains secretive, but Theresa May, the then-home secretary and current prime minister, told parliament's joint security committee in 2011 that the unit was “road-testing some quite innovative approaches to counter-ideological messages”.

David Miller, a professor of sociology at the University of Bath researching Muslim civil society groups and government communications, said that apparent parallels between the methods employed by Bell Pottinger in Iraq and RICU suggested that the Home Office had adopted the same propaganda approach.

“The key thing is it means that when the government says there are all these Islamist terrorists online recruiting people from schools you have no idea how much of this stuff is actually propaganda," Miller told MEE.

He believes that counter-terrorism police and security services use fake social media accounts purporting to be Islamic State recruiters as a tool for intelligence gathering and in order to get people "banged up".

"We have no idea whether all these supposed ISIS recruiters are real or not. And it’s not just that they are doing it in the abstract to spy on people. It’s actually part of the propaganda campaign to suggest that there is more of a threat than there is."

A paper titled "Strategic Communications and National Strategy" produced by the Chatham House think tank and Bell Pottinger in 2011 set out recommendations as to how strategic communications could be used more effectively and more discreetly to promote the Prevent strategy’s counter-extremism objectives.

“In this instance the narrative will be more powerful if it is subtle and not perceived to be an attempt on the part of the state to re-engineer a situation in order to minimise a perceived threat against it,” the report recommends.

“The main actors in the counter-radicalisation context are those with local influence, including community and religious leaders, teachers, families, youth workers and others.”

The paper also proposed that private companies should be used to promote strategic communications when they required "subtlety of message and where the intended influence and outcome should not be seen as connected in any way to government interests or aims, for fear of further alienating the audience".

Ibrahim Mohamoud, a spokesperson for the human rights campaign group Cage, which lifted the lid on RICU's activities in a report in May, told MEE that the role of PR companies in manufacturing propaganda raised issues about corporate ethical responsibility.

"Cage documented the existence of a secret government programme to control and shape the conversations taking place in the Muslim community. It is clear that key figures at the heart of the RICU project within the Home Office are responsible for introducing US military style ‘hearts and minds’ propaganda as a part of the Prevent Strategy," he said.

A Home Office spokesperson told MEE that RICU did not engage in the techniques that Bell Pottinger are alleged to have used in Iraq.

The spokesperson said the unit's remit was to build "creative partnerships between government, civil society and industry, in order to counter terrorism and extremism and to protect the public from the harm of organised crime".