At home on the pitch: Refugees in Florida find community in football

As the second annual Florida Refugee Cup kicks off, players and sponsors hope for a better future despite Trump crackdown 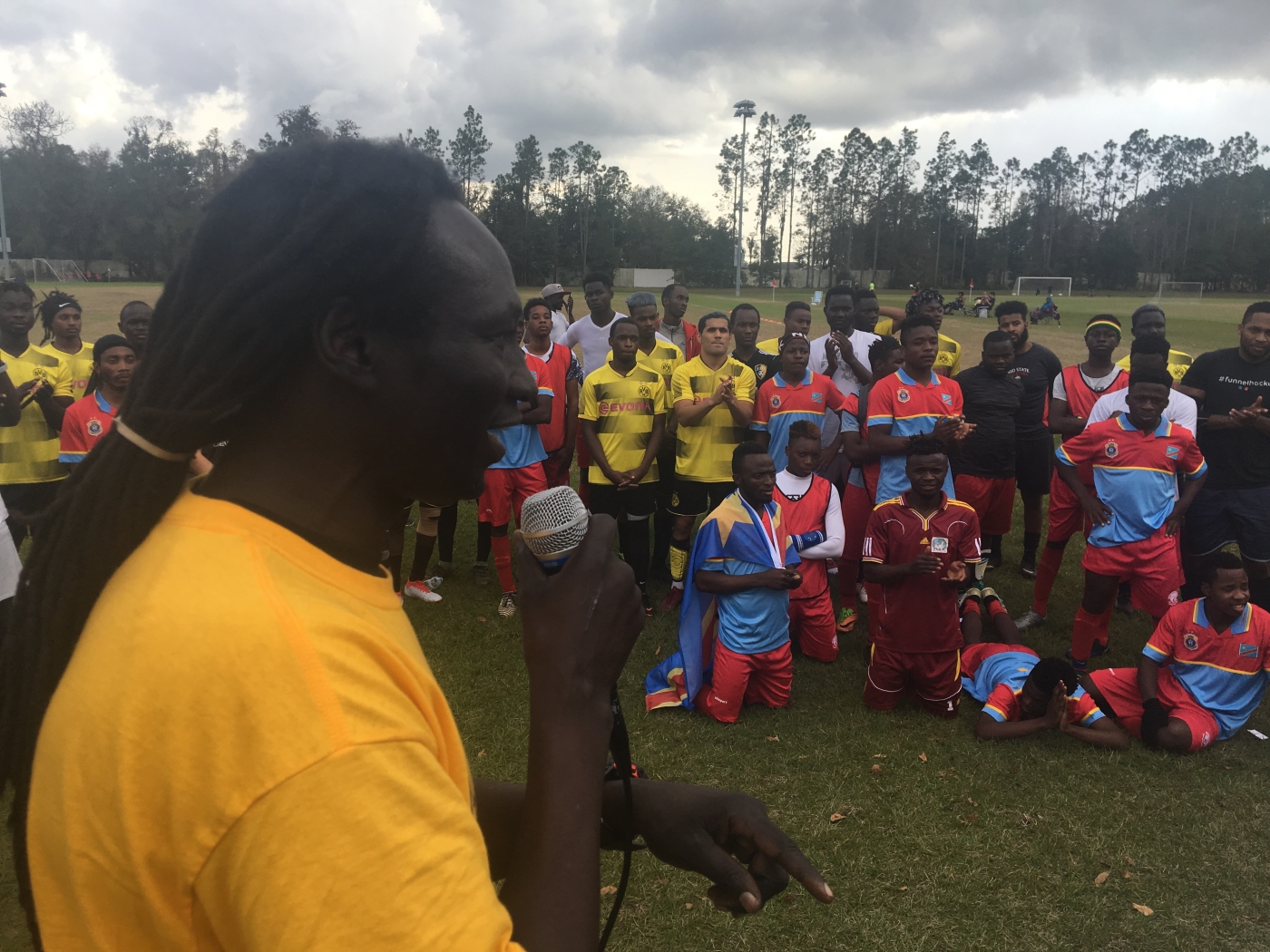 Tampa, FLORIDA - Football was a refuge for Henry Mabior long before he arrived in the United States. After he fled Sudan during the second Sudanese civil war, Mabior used football as a familiar distraction from the chaos while he awaited his fate at Dadaab refugee camp in Kenya.

Arriving in the US in 1995, Mabior started to build a fresh life, but struggled to relate to his new community in northern Florida.

Much of the diverse refugee population in Jacksonville was divided by language and culture, but Mabior quickly found common ground, as most of his peers seemed to have two things in common: a yearning for home and a love for football.

"Football became our language and our way to relate to one another," Mabior told Middle East Eye, standing on the sidelines while the team he created and now coaches started their warm-up behind him.

Mabior founded the Jacksonville Eagles Stars less than a year after he arrived in the US.

His first line-up was comprised of other Sudanese, as well as Somali, Ethiopian, Liberian, Libyan and Iraqi players - all refugees. Today his team is made up of players from similar origins, all finding solace in football.

"Football became part of our culture here, the people - especially those who came from the Middle East and Africa - came together on one team of refugees," Mabior said.

"But unfortunately, things have taken a negative turn recently," he said. "The kids feel more like strangers here than ever before because of this idea of 'make America great again'."

Refugees in the age of Trump

With hopes to inspire his players, last year Mabior, along with the Florida Immigrant Coalition (FIC), launched the first annual Florida Refugee Cup, inviting another team of refugees, the Tampa Bay Mitumba FC, to Jacksonville for a friendly match between the teams.

Basma Alawee, the Florida Refugee Organiser at FIC, told MEE that the event was created as a statement to combat the "negative climate" she feels has swept the country under the administration of US President Donald Trump.

For decades, the US promised to resettle 95,000 refugees per year, but today that number has been cut by nearly two-thirds, according to documentation by the Refugee Council USA (RCUSA), a coalition of 24 US-based non-governmental organisations.

According to the council, in 2018 the US set the cap on refugee admissions at 45,000 people, but as of 30 November only 13 percent of the eligible total had been admitted.

This year the US set the cap on refugee admissions at 30,000 people.

Basma Alawee, a refugee from Iraq, came to the US in 2010. Not long after getting settled, she started volunteering with several refugee outreach programmes in her community.

By 2013, she was selected as a delegate of Florida at the UNHCR Refugee Congress.

Alawee said one of the biggest challenges refugees in the US now face is the major funding cuts to refugee resettlement programmes.

"We've all heard about this administration trying to ban people from specific countries," Alawee said.

Today we are here to compete, but also we are just here to have fun and be together

Because the State of Florida's refugee programme is the largest in the nation, the cuts have been particularly hard to handle, pushing the local community to double-down on a grass-roots level to support each other.

"We want to try and get all of these kids involved, to teach them about advocacy and to teach them how to advocate for themselves," she said.

Before the match kicked off, various community leaders gave speeches and offered words of inspiration to the crowd.

Alawee, the last to speak, ended her message with a chant that was echoed back, reverberating through the park: "Say it loud, say it clear, refugees are welcome here."

'I love this team'

Fadi Altyari, a 22-year-old refugee from Iraq, has been playing on Mabior's team since he was 15, just a year after he arrived in the US.

"I love the game, and I love this team, it's like my family," he said.

Altyari, a soft spoken young man taking a gap-year from a local community college, hopes to one day become an electrician. He shied away from political conversation, preferring to talk football.

"I've always played football with my friends, even back in Iraq, so it is like another home in a way," he said. "Today we are here to compete, but also we are just here to have fun and be together."

Last year, the Eagles Stars won the Florida Refugee Cup 4-1, and on Saturday the Mitumba FC were determined to even the score.

"It is a friendly game, but of course the boys want to win," Mabior said, laughing.

Teenagers and young men from around the world gathered on the pitch with family members, friends and locals who support the refugee community crowding the stands. About 200 people showed up to support the teams.

A handful of languages intermingled with English throughout the event.

In the end, the Mitumba FC won the game 4-2, making next year's match a tie-breaker in the newly developed friendly competition between the two teams.

'Back home we don't have freedom'

Mabior said that, while he believes football helps with morale, he has seen the difference in his players over the past few years, and hopes his role as coach is able to influence his players for the better by providing them with strength and support.

"I tell them that with time there is change, and I believe the next change is going to be in their favour," he said.

"I tell them what they need to do now is to have patience and try to be the best version of themselves.

"To tell people that they are not here to harm Americans, but instead they are here to take the opportunity that America has provided them, because America is a land of freedom, and that's the only reason we are here, because back home we don't have freedom, back home there is a lot of trouble.

"We came to America not just so America can help us, but also so we can help America. This is the idea I try to give them," he said.

"Stay positive, don't be negative, and be ready when our chance comes up to help."