A Syrian man reacts to rescuers looking for victims under the rubble of a building after an air strike in northern Aleppo (AFP)
By
MEE staff
Four hospitals and a blood bank in the Syrian rebel-held city of Aleppo have been hit by air strikes carried out by the Syrian government and Russian forces, according to a group of doctors on Sunday.
The Independent Doctors Association (IDA), a group of Syrian doctors supporting clinics in the city, said in a statement that the hospitals were bombed over the course of 24 hours in the same neighbourhood of east Aleppo.
A paediatric hospital was one of the hospitals struck, killing a two-day-old baby and injuring many others, according to the statement.
The doctors said the infant was killed after a bomb hit their oxygen tank in the hospital.
A second air strike hit the same hospital nine hours later and rendered the four hospitals "dysfunctional," according to the IDA.
“The doctors could only yell for their colleagues to take cover and shield the babies,” the group said in a statement.
Footage posted by the IDA of the strike's aftermath showed agitated doctors carrying a tiny baby in a room lined with incubators, with sandbags piled high just outside the entrance.
The IDA also said in its statement that the four hospitals - the children’s hospital, al-Bayan, al-Zahraa and al-Daqaa - hit by the air strikes will be going out of service “as a result of the escalating series of aerial attacks taking place against health facilities in Aleppo by Syrian and Russian war planes”.
This announcement came amid a growing humanitarian crisis in Aleppo, as fighting has intensified between Syrian rebel groups and Syrian government forces, supported by Russian war planes.
It warned that doctors "are not able to get any wounded people out or any medicine in to this devastated city".
These latest attacks in Aleppo come two months after the UN Security Council adopted Resolution 2286, which strongly condemned attacks against medical facilities and personnel in conflict situations.
The IDA said the four hospitals would be out of service until the resolution is properly enacted.
According to the Syrian Civil Defence group, the air strikes hit Aleppo's last remaining blood bank in operation.
The group also said six medical facilities had been targeted in the space of 24 hours in Aleppo by warplanes belonging to the Russian and Syrian governments, with the IDA predicting more than 200 people dying as a consequence of the air strikes, in a statement released earlier today via social media.
Last year, the World Health Organisation said Syria is the most dangerous place for healthcare workers to operate, with 135 attacks on health facilities and workers in 2015.
Several hospitals have been damaged in recent months and medical staff killed in the densely populated eastern neighbourhoods of Aleppo.
A hospital in the eastern Maadi neighbourhood was hit eight days ago, wounding some staff and patients inside.
The head of the International Committee of the Red Cross, Marianne Gasser, in a statement described the situation unfolding in Aleppo as "devastating and overwhelming".
Gasser also said that every neighbourhood in the city of Aleppo had been hit and that vital infrastructure was being repeatedly hit by Syrian government and Russian air strikes.
Separately, Syrian activists have called for global protests after dozens of civilians were reportedly killed by US-led coalition air strikes, in what one monitor called the “worst week” for civilian casualties in the two years since the coalition entered the war.
Facebook pages managed by Syrian activists urged people around the world to take to the streets to protest against the deaths under the banner "Manbij is being exterminated".
"We ask all Syrians, whatever their affiliations or sects, and all free people of the world and especially the people of Manbij to stand in solidarity with our devastated city on Sunday, July 24," wrote one page that publishes local news about Manbij.
Manbij is a key town near the Turkish border in Aleppo province where US-coalition forces are supporting Kurdish led in fighters in battling the Islamic State (IS) group.
Children were among at least 56 civilians killed on Tuesday in raids by coalition warplanes. The people were fleeing the village of al-Tukhar near Manbij, according to the Syrian Observatory for Human Rights.
Asked about the al-Tukhar raids, the US-led coalition said it had recently "conducted air strikes near Manbij" and was looking into the reports of civilian casualties.
Airwars, a website tracking civilian deaths by the US-led coalition, said in a tweet that the past week was the deadliest for civilians since the coalition began operations against IS.
More than 280,000 people have been killed since Syria's conflict erupted in 2011, and millions have been forced to flee. 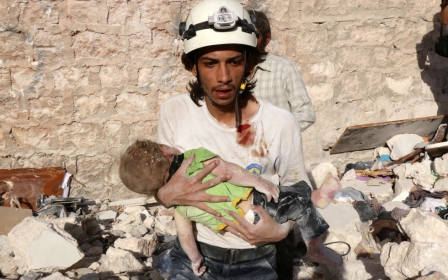 Syria War
Aleppo on brink of starving and overwhelmed by shelling: Aid groups