The Shiite militia that seized power in Sanaa said on Sunday it will not cave in to "threats" after Yemen's Gulf neighbours urged the UN to act forcefully against its takeover, which many Yemenis describe as a "coup" against democracy.

Yemen has descended into chaos since the militia, known as Houthis, seized Sanaa in September. Matters worsened last month when they ousted the government and the democratically elected parliament, prompting wide ant-Houthi protests across the country.

Abdulsalam insisted that Yemenis were "engaged in a process of self-determination free of any (foreign) tutelage."

Yemen's Gulf neighbours on Saturday urged the international community to act forcefully over the deteriorating security situation in the Arabian Peninsula country, including possible military intervention.

The 57-member Organisation of Islamic Cooperation (OIC) voiced support Sunday for the GCC statement and condemned the Houthi "coup".

And the Arab League said it will hold an emergency meeting on Yemen on Wednesday.

The Houthis seized Sanaa in September before tightening their grip and prompting President Abd Rabbuh Mansour Hadi to tender his resignation.

They dissolved parliament and installed a "presidential council" to run Yemen on February 6, sparking security concerns that saw several Arab and Western countries close their embassies and evacuate diplomats.

On Sunday the militia spokesman denounced as "provocative blackmail" demands for the Houthis to relinquish power.

The withdrawal of ambassadors "reflects the panic that has hit some political forces which aren't betting on the people... and their dignity, but on foreign" countries, said Abdulsalam.

"These embassies are here to oversee the interests of their own countries and not those of the (Yemeni) people," he added.

In the city of Ibb, which the Shiite militia has held since last year, protesters chanted: "Houthi, Iran: Yemen is not Lebanon!", in a reference to predominantly Shiite Iran's alleged support for the militia.

Witnesses said the Houthis wounded at least six people when they fired warning shots to disperse the protest.

Similar demonstrations took place in the Shiite-populated city of Dhammar which is also under Houthi control, and the southern city of Daleh, where protesters demanded political parties end their UN-brokered talks with the militia in Sanaa.

In the capital, hundreds protested describing the militia as "gangs that could not build a state".

Torture and ban on demos

Meanwhile, the family of demonstrator Saleh Awadh al-Bashiri, detained by the Houthis on Wednesday at a protest against their takeover, said he had died of torture wounds suffered in captivity.

Another two protesters who were held with him have been hospitalised after being found wounded and left on a street.

The families posted pictures on social media they said were of their sons, showing parts of their bodies bruised and swollen from beatings.

On Sunday, the Houthis announced a ban on all demonstrations against them unless they are authorised by the interior ministry, which itself is now under their control.

The militiamen have been accused of attacking and detaining protesters as well as reporters covering demonstrations against their power grab.

Meanwhile, thousands of Abyan tribesmen staged a demonstration on Sunday in southern Yemen to denounce what they described as a coup by the Houthi militant group.

"The protest is an expression of the tribes' rejection of the Houthi coup against the president and the government," tribal leader Ali Eidah told the Anadolu Agency.

Eidah called for resigned President Hadi to be restored and for the outcome of the national dialogue to be implemented.

He said demonstrators also wanted to denounce the Houthis' takeover of capital Sanaa and other provinces by force.

"Our tribesmen and representatives of various political factions have all expressed willingness to fight off any Houthi attempt to enter Abyan province," Eidah threatened.

Political forces and governors of three southern provinces - Aden, Lahij and Mahra - formed a local "administrative, security and political leadership rejecting the coup" by the Houthis.

In a statement issued at the end of a meeting in the main city of the south, Aden, leaders of the three provinces rejected all decisions by the Houthis, called for Hadi's reinstatement and affirmed their support for Yemen becoming a federation based on the outcome of a national dialogue held last year.

The Security Council is expected to adopt a resolution calling on the militia to withdraw its forces from government and security institutions "immediately and unconditionally".

It also urges the Houthis to "engage in good faith in the UN-brokered negotiations" led by special envoy Jamal Benomar and to release Hadi, his Prime Minister Khalid Bahah, and other officials and activists under de facto house arrest or in detention.

According to Western diplomats, Russia, which is already under US and European sanctions over its annexation of Crimea and backing of rebels in eastern Ukraine, was reluctant to vote for sanctions.

The text marks the Security Council's first resolution on Yemen since the Houthis ousted the government and parliament.

UN Secretary General Ban Ki-moon has warned that Yemen is falling apart and said Hadi should be restored to power. 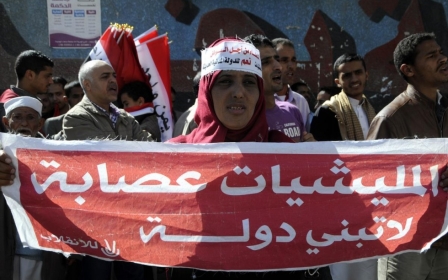 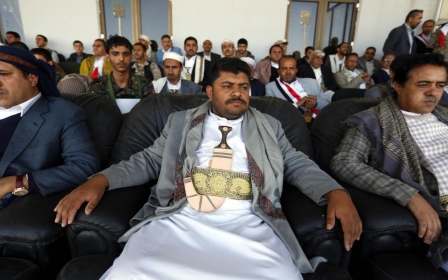