Yemen's rial plummets as government and Houthis battle over banknotes 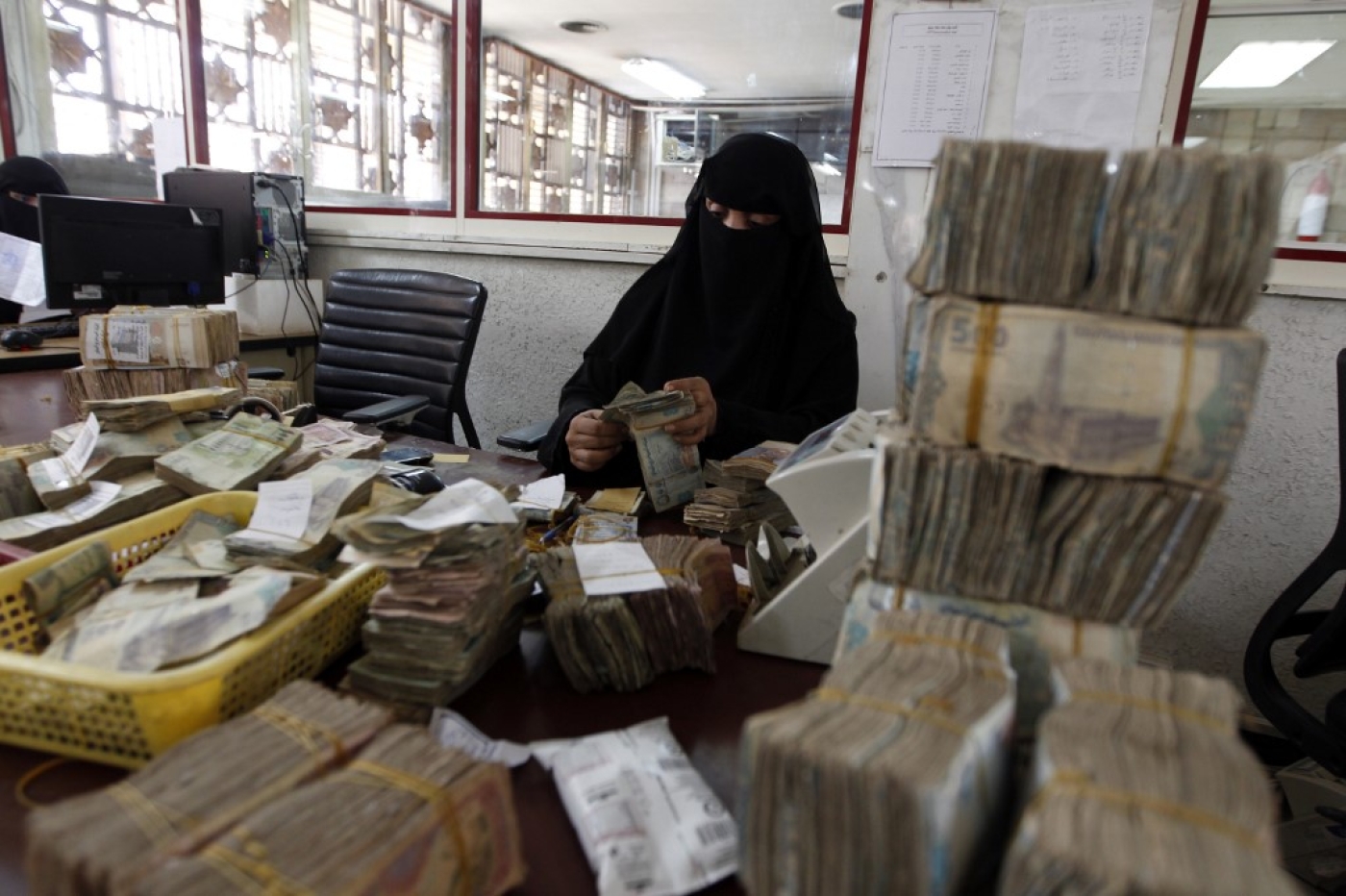 The five-year conflict between Yemen's government and the Houthi movement has found a new battleground: banknotes.

With the two combatants setting up rival administrations in the capital Sanaa and the southern city of Aden, Yemen has found itself caught between two central banks, bringing further instability to its war-ravaged economy.

In September 2016, the internationally recognised government of Abd Rabbuh Mansour Hadi relocated the central bank from Sanaa to Aden to free it from the control of the Houthis, who seized the Yemeni capital two years before.

Over the past three years, Hadi's Aden-based government has printed large quantities of the Yemeni rial with an amended size and design.

Citizens across the country have switched to the new banknotes, until 19 December, when the Houthi authorities in Sanaa banned their circulation over concerns that the Yemeni currency had fallen due to the large amounts of the new notes.

Over the last two weeks, the Yemeni rial's exchange rate against the US dollar remained steady at 580 in the Houthi-controlled areas, but depreciated to 630 rials in the pro-Hadi ones. Pre-war rates were about 215 rials to the dollar.

Sanaa’s central bank gave residents a one-month time limit to exchange the new banknotes for old money. Otherwise, the bank said it could provide them with a proposed virtual currency called the "electronic rial" - though that system is not yet in use. Mohammed Abdulqader, a civil servant at the finance ministry in Sanaa, predicted the rial's price in the city would stay the same for the foreseeable future after the ban.

According to Abdulqader, Hadi's administration was printing new banknotes without ensuring that there was an adequate amount of foreign currency in the country to help buoy the rial.

“It is normal that any new quantities of Yemeni currency will lead to withdrawing foreign currency from the market,” he told Middle East Eye.

Abdulqader added that the Hadi government “does not care” about the rial's collapse, and has not properly studied the potential consequences of its decision to print money.

“The collapse of the currency in the south is solid evidence that printing the new quantities of money stands behind the collapse of the Yemeni rial and the economic crisis,” the civil servant said, adding that he considers the new banknotes “illegal money”.

The war in Yemen, started in 2014 and exacerbated by a western-backed Saudi-led coalition's invervention in 2015, has taken its toll on the Yemeni rial, which has lost more than half its value over the past five years.

The overall depreciation of the rial has been mainly triggered by a shortage in foreign currency as a result of the dwindling oil and gas exports hit by the war.

Last year, Saudi Arabia's King Salman ordered a deposit of $2bn to be paid into Yemen's central bank to shore up the weak Yemeni currency.

But Riyadh’s move appears to have failed - while the rial initially rallied to 400 to one US dollar, it soon began falling again, with almost no trickle-down effect on the population.

The Houthi authorities allow individuals to exchange up to 100,000 rials ($400). However, if the amount is higher, is it considered "commercial money" and seized by the government.

That has led to Sanaa residents hiding the new banknotes and sending them secretly to Hadi-held areas of the south to be exchanged for the old cash or foreign currency.

Muneer, a debt collector in Sanaa, said many traders he dealt with in his city used both old and new banknotes in 2019.

“They had no choice but to provide me with two versions of banknotes,” Muneer told MEE. Dying for dollars in Yemen: 'I can hide from shelling, but I cannot flee from cancer'
Read More »

However, the money he accepted was later seized at a Houthi checkpoint while he was driving his bus.

“The Houthis seized 2,600,000 rials from me and refused to return them,” he said, adding that he attempted to take his money back from police and political authorities, but with no luck.

“They insisted on seizing it, claiming it was illegal.”

Everyone, including the shopkeeper, vendors and taxi drivers,now decline to accept the new banknotes. This has had an impact on commerce in the Houthi-controlled areas.

Nabil Dhafer, a shopkeeper in Sanaa, told MEE: “During the last two weeks, my sales have dropped because many customers have new banknotes, which I reject to avoid penalties.

“I think this money will eventually return to the market as it facilitates our work and it is already in the hands of people.”

Hamdi Baobaid, a cashier in an exchange company in Sanaa, said his company does not accept the new banknotes, as it works under the supervision of the central bank.

According to the cashier, some Yemenis are attempting to exploit the issue and differing exchange rates by buying US dollars in Sanaa, exchanging them in the south for a bigger return, and then taking those rials back up to the capital.

“The exchange companies have therefore raised the transfer fees between the Houthi and Hadi-controlled areas to stop the exploitation of this difference in the exchange rate,” Baobaid told MEE.

The remittance fee, according to Baobaid, has increased from less than 1 percent to around 10 percent during the last three weeks, changing in accordance with the rial's exchange rate with the dollar.

Economic expert Alawi Abdulhadi, who teaches economics in a number of southern universities, said that the collapse of the Yemeni currency in the south could be attributed to the fact that the Aden government continues to pay the salaries of some civil servants in the north.

“The Yemeni government was forced to print more quantities of banknotes to continue paying the salaries, which the Houthis do not pay,” he told MEE.

Most civil servants in the Houthi-controlled areas have not received salaries since August 2016, but received occasional incentives from Sanaa authorities. Only those working in the judiciary continue to receive salaries from Aden.

“The decision by the Houthis to ban the circulation of the newly printed banknotes has had an impact on residents but not on the government. Residents in the north cannot buy with the new versions they have.”

Abdulhadi said that the Yemeni government might resort to the international community to resist the pressure from the Houthis. “If the government does not unify the two currencies, this may be the beginning of economic independence between the south and the north,” he said.

Regarding the confiscation of the new banknotes by the Houthis, Abdulhadi considered it to be an illegal means of “stealing money from Yemenis”.

“The Houthis allowed people to circulate the new banknotes during the last three years, and now they seize it from their pockets under the pretext of maintaining the Yemeni currency," he said.

“I want to know where the Houthis take this money, did they burn it? No, they send it to the south and buy foreign currency and it goes to the Houthis and their fighters.”

He said that this is one of the reasons that has led to the ongoing currency collapse in the south.

Civil servants working in the judiciary in the Houthi-controlled areas used to receive salaries from the Yemeni government until last month, when Hadi's administration paid their salaries in the new notes, which banks could not release due to the ban.

“Those who want to receive their salaries travel to a pro-Hadi area to receive it in the new banknotes and then exchange it to old banknotes before returning home,” Abdulhadi said.

“Half the salary, however, will likely be lost in transportation costs.”