Both major US parties used this week's AIPAC meeting to fight over who supports Israel more. Here's what they said 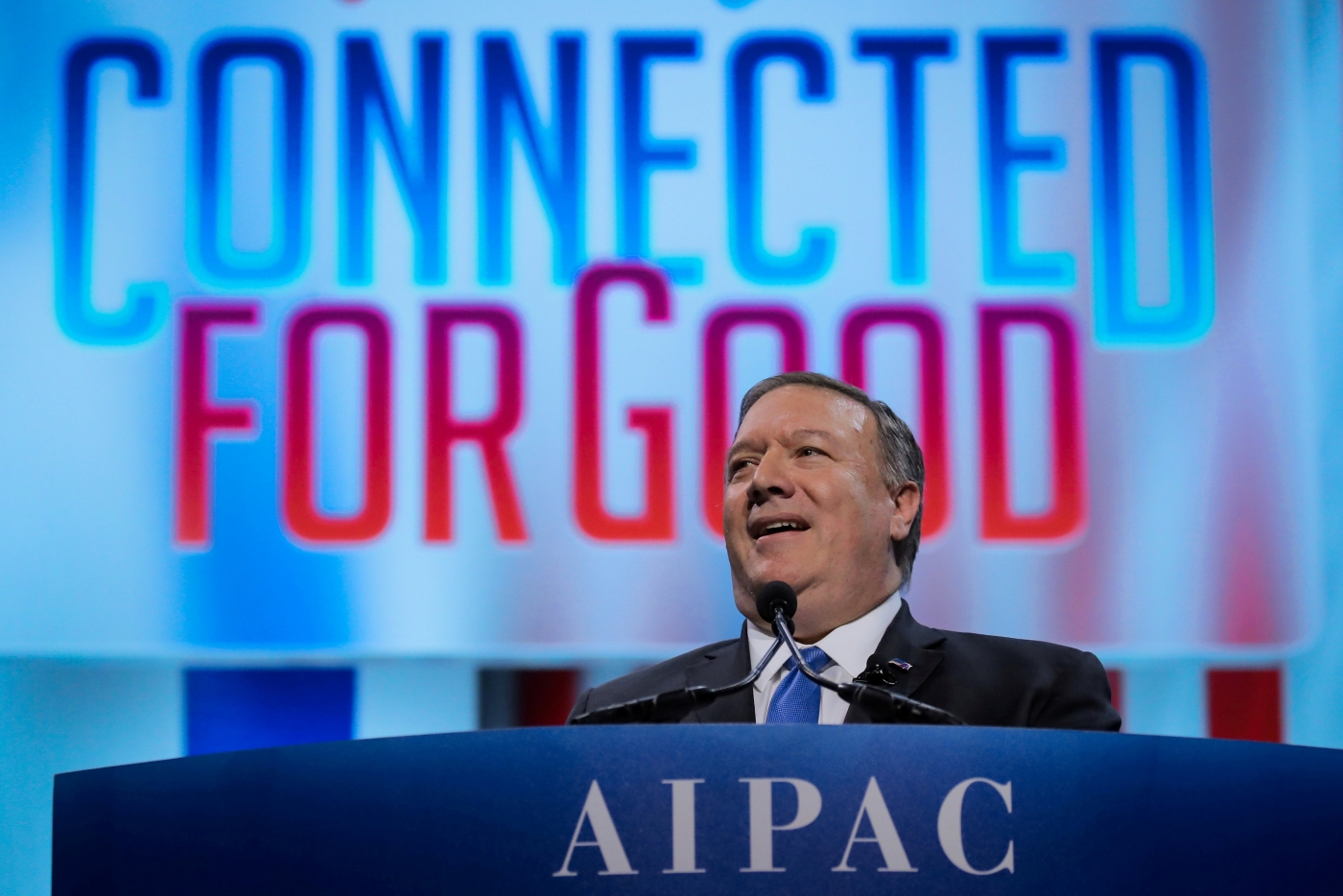 Every year, senior Democratic and Republican lawmakers from across the United States present their defence of strong US-Israel ties to thousands of pro-Israel attendees at the American Israel Public Affairs Committee's (AIPAC) conference.

This week's meeting, which concluded on Tuesday in Washington, was no exception.

Still, partisan cracks were perhaps more apparent than ever as members of President Donald Trump's administration took potshots at their Democratic rivals, accusing the party of pledging less-than-unwavering support for Israel.

Top Republicans backed their claim by pointing to a decision by top Democratic 2020 presidential candidates to skip this year's conference, Democratic Congresswoman Ilhan Omar's recent criticism of the lobby group, and support among the party's progressive wing for the Boycott, Divestment and Sanctions (BDS) movement.

But Democrats didn't take the criticism lying down.

Instead, several leading lawmakers from the party's old guard used the AIPAC conference as a platform to list their pro-Israel bonafides - and send a clear message to the crowd: don't believe what the Republicans are saying; our support for Israel remains firm.

Here's what US lawmakers said during three days of bombastic speeches and incendiary promises at this year's AIPAC conference:

US Secretary of State Mike Pompeo

The US secretary of state addressed AIPAC delegates on Monday, the same day US President Donald Trump recognised Israel's "sovereignty" over the Golan Heights, a contentious move that drew the ire of many countries across the region, as well as human rights and legal groups.

"That recognition ties in with my own personal connection to Israel, and more importantly, to America's connection with Israel," Pompeo told the crowd, about Trump's decision. He said that he visited the Golan Heights with his family "to study the great and historic tank battles".

"In Israel's hour of need, in support of these great battles, America launched Operation Nickel Grass. It provided Israel with tanks, with artillery, with munitions, and all the other supplies that were needed to continue the defence of the homeland," Pompeo said.

He moved on to say that criticism of Israel equates to anti-Semitism.

That's a longtime talking point for Israel's supporters, but it has been rejected by Palestinian rights activists, who say that accusations of anti-Semitism aim to silence the debate on Palestine.

"So, friends, let me go on record: anti-Zionism is anti-Semitism," Pompeo said. "The Trump administration opposes it unequivocally and we will fight for it relentlessly."

"It's a cancer metastasising in the Middle East, in Europe, and indeed, sadly, here in the United States as well," Pompeo added.

He also took potshots at the Labour Party in the UK.

The party's leader, Jeremy Corbyn, has been dogged by allegations of anti-Semitism, a charge he denies.

"In Britain, the Labour Party's tolerance of anti-Semitism in its ranks is a national disgrace. And France's Jews are under attack. The incidence of anti-Semitic attacks in Germany is also on the rise," Pompeo said.

Pompeo stated that hate crimes against Jews have been on the rise in the US, mentioning last year's mass shooting at a synagogue in Pittsburgh that killed 11 people.

He failed to mention that the shooter harboured white supremacist views and frequented a far-right messaging board.

Trump's vice president, meanwhile, opened his remarks at AIPAC by not talking about Israel or the US relationship with the country, but rather droning on about how Special Counsel Robert Mueller's investigation into potential collusion with Russia had turned up short.

Pence also brought US politics to the forefront by criticising the Democratic presidential candidates for skipping the conference.

"As I stand before you, eight Democrat candidates for president are actually boycotting this very conference," Pence said.

"So let me be clear on this point: anyone who aspires to the highest office in the land should not be afraid to stand with the strongest supporters of Israel in America," he added.

Mike Pence opened his remarks at the AIPAC conference by listing Trump's accomplishments and slamming Democrats' "reckless accusations" after a summary of Mueller's report said there wasn't enough evidence to “establish” that Trump and Russia colluded https://t.co/n8s92MzP8y pic.twitter.com/pqbhmrJ9Df

Pence continued his offensive against the Democratic Party on the subject of the BDS movement, which seeks to pressure Israel to end its human rights abuses against Palestinians.

"Remarkably, today, all but one Democrat running for president voted against the Combating BDS Act in the United States Senate," Pence said, referring to Senator Amy Klobuchar.

The bill says US states can "divest" from contractors they disagree with on the Israeli-Palestinian conflict.

The party's high-profile 2020 hopefuls, including Kamala Harris, Beto O'Rourke and Bernie Sanders, have said they don't agree with BDS, but that the movement should be allowed to operate under the First Amendment, which enshrines Americans' right to free speech.

"It's astonishing to think that the party of Harry Truman, who did so much to help create the state of Israel, has [been] co-opted by people who promote ranked anti-Semitic rhetoric and work to undermine the broad American consensus for support for Israel," Pence said on Monday.

He then implicitly lobbed rhetorical barbs at Congresswoman Ilhan Omar, a Democrat from Minnesota and a Somali immigrant, for using "anti-Semitic tropes".

"At a minimum, anyone who slanders those who support this historic alliance between the United States and Israel should never have a seat on the Foreign Affairs Committee of the United States House of Representatives," he said.

Omar landed in hot water for making references to AIPAC's lobbying power, and her use of the phrase "allegiance to a foreign country" led to criticism that she was accusing Jewish-Americans of dual loyalty.

Omar has repeatedly denounced anti-Semitism, Islamophobia and other forms of hate mongering.

McCarthy, the Republican minority leader in the US House of Representatives, used similar language as Pence and Pompeo in his address at the AIPAC conference.

He also singled out Omar for criticism, saying Republicans in the House were behind a resolution to condemn the congresswoman's recent comments.

"When I heard language spoken in the own floors of Congress, I want you to know we did not stand silent. We moved a resolution. Even as the minority party, I will make you this one promise. We will never let it stand. We'll never let it grow, and we'll try to crush it any place we see it,” he said.

He also praised the work that his Democratic colleague Steny Hoyer and AIPAC does by inviting freshmen lawmakers to visit Israel, saying that while the pair "may be of different parties ... [they] work very great when it comes to Israel".

"Our staffs meet together. We work together," McCarthy said.

He later also took shots against the BDS movement, calling it "the very worst element that we see".

"It is appalling to what they are saying, of trying to equate Israel to something they are not, equating it saying it's Nazi or other elements that are just so untrue. It's not about coexistence. It's about coercion," he said.

The Democratic Majority Leader of the House, meanwhile, issued broad proclamations about the relationship between the United States and Israel.

"The founding of the State of Israel was one of the greatest political achievements of the 20th century," Nancy Pelosi said on Tuesday at the AIPAC conference.

At the height of the Omar controversy last month, Pelosi signed a letter that specifically condemns "Congresswoman Omar’s use of anti-Semitic tropes and prejudicial accusations".

"From Israel's founding through the present day, our pledge remains the same: Israel and America are connected now and forever. We will never allow anyone to make Israel a wedge issue. That pledge is proudly honoured in this Congress where support for Israel remains ironclad and bipartisan," Pelosi said. She also criticised BDS, saying that she hopes to pass a resolution that condemns the movement as detrimental to the peace process.

That resolution, which was introduced earlier this month, "explicitly opposes the BDS movement", Pelosi told the AIPAC crowd.

"The resolution goes on to recognise that [the] BDS movement does not favour a two-state solution and undermines the possibility for a negotiated solution to the Israeli-Palestinian conflict," she added.

Pelosi then went on to say that Israel is still surrounded by threats, including Hamas in the besieged Gaza Strip and Hezbollah in Lebanon, and that a two-state solution is predicated on the security of Israel.

"Make no mistake, anti-Semitism and anti-Israel sentiments are all too often totally entwined," Chuck Schumer said.

And similar to Pelosi, Schumer condemned BDS, calling it anti-Semitic.

"Anti-Semitism can sometimes be cloaked, hidden by certain movements, that professional bias, but suspiciously hold Israel to a different standard than any other nation. There is no greater example than the pernicious effort to harm Israel," he said.

He went on to say that the United Nations also has an anti-Semitic bias against Israel.

"There's one other place where this cloaked anti-Semitism lurks and that is in the halls of the United Nations," Schumer said, echoing top Israeli government officials who have for years condemned the UN for alleged bias.

"The UN singles out Israel more than any other nation, especially in the human rights council which remains hell-bent on admonishing the only beachhead of democracy in representative government and equal rights in the Middle East," he said. US Politics
No mention of Palestinians or Israeli settlements, as Democrats take AIPAC stage 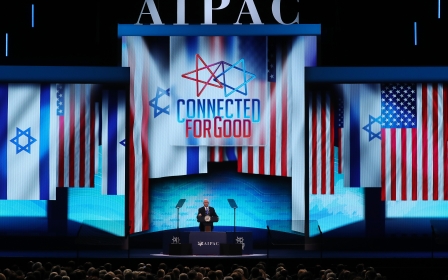