'Anyone who aspires to the highest office in the land should not be afraid to stand with the strongest supporters of Israel in America,' Pence says (AFP)
By
Ali Harb
in
Washington

US Vice President Mike Pence has slammed Democratic presidential candidates for skipping the AIPAC conference, accusing the party of no longer supporting Israel.

In a speech at the pro-Israel lobby group's annual conference in Washington on Monday, Pence said no candidate seeking the highest office in the United States should be afraid to pledge his or her support for AIPAC.

"As I stand before you, eight Democrat candidates for president are actually boycotting this very conference," Pence said.

"So let me be clear on this point: Anyone who aspires to the highest office in the land should not be afraid to stand with the strongest supporters of Israel in America."

What is the AIPAC conference?

Pence appeared to echo the rhetoric of his boss, President Donald Trump, who recently accused Democrats of abandoning Israel and as a result, called on Jewish-Americans to support Republicans instead.

Several top Republicans have also recently accused Democrats of showing dwindling support for Israel - a strategy that analysts say aims to exploit divisions within the party ahead of the 2020 presidential elections.

In fact, Democrats already seem to be turning on one another over Israel, as House Majority Leader Steny Hoyer condemned fellow Democratic lawmakers critical of Israel during a speech at the AIPAC conference on Sunday.

A day later, Pence also called out the top 2020 Democratic presidential candidates for opposing a recent bill that encourages states to penalise contractors who boycott Israel.

The bill, which passed in the US Senate last month with the support of the majority of Democratic lawmakers, is the latest US legislative measure to target the Boycott, Divestment and Sanctions (BDS) movement.

BDS seeks to pressure Israel economically and politically to end its human rights abuses against Palestinians. 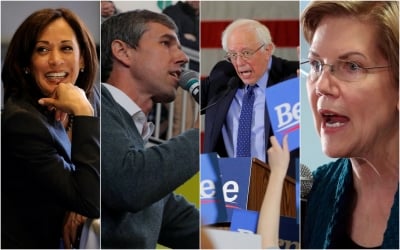 "Remarkably, today, all but one Democrat running for president voted against the Combating BDS Act in the United States Senate," Pence told AIPAC delegates.

Senator Amy Klobuchar was the only Democratic lawmaker in the presidential race to back the bill, while leading candidates Bernie Sanders and Kamala Harris voted against it.

Leading US rights advocates have called anti-BDS laws a threat to the First Amendment, which protects freedom of speech.

In fact, federal courts overturned anti-BDS laws in the states of Arizona and Kansas last year, while several other measures are still being challenged in the legal system.

"It's astonishing to think that the party of Harry Truman, who did so much to help create the state of Israel has [been] co-opted by people who promote ranked anti-Semitic rhetoric and work to undermine the broad American consensus for support for Israel," Pence said on Monday.

Former President Truman, a Democrat, was amongst the first world leaders to recognise Israel as a state in 1948.

On Monday, Pence went on to denounce Muslim-American Congresswoman Ilhan Omar, without identifying her by name - a common occurrence among this year's AIPAC conference speakers.

In his speech, Pence accused Omar of trafficking in "anti-Semitc tropes".

The lawmaker faced widespread attacks last month after she said the pro-Israel lobby pushes for "allegiance" to a foreign nation and suggesting that support for Israel in Washington is driven by financial contributions to US politicians.

Left-wing members of Congress and several Democratic presidential candidates defended the congresswoman, however, noting that the backlash against her had led to threats to her safety.

Still, the controversy has led to growing calls to remove Omar from the House Foreign Affairs Committee, a demand Pence reiterated in his speech on Monday.

"At a minimum, anyone who slanders those who support this historic alliance between the United States and Israel should never have a seat on the Foreign Affairs Committee of the United States House of Representatives," he said.

Later on Monday, US Secretary of State Mike Pompeo addressed the AIPAC conference saying that anti-Zionism is the same as anti-Semitism, a notion often disputed by Palestinian rights activists, who say that accusations of anti-Semitism aim to silence the debate on Palestine.

"So, friends, let me go on record: Anti-Zionism is anti-Semitism," Pompeo said. "The Trump administration opposes it unequivocally and we will fight for it relentlessly. "