How did Hamas's military expertise end up with Syria's rebels? 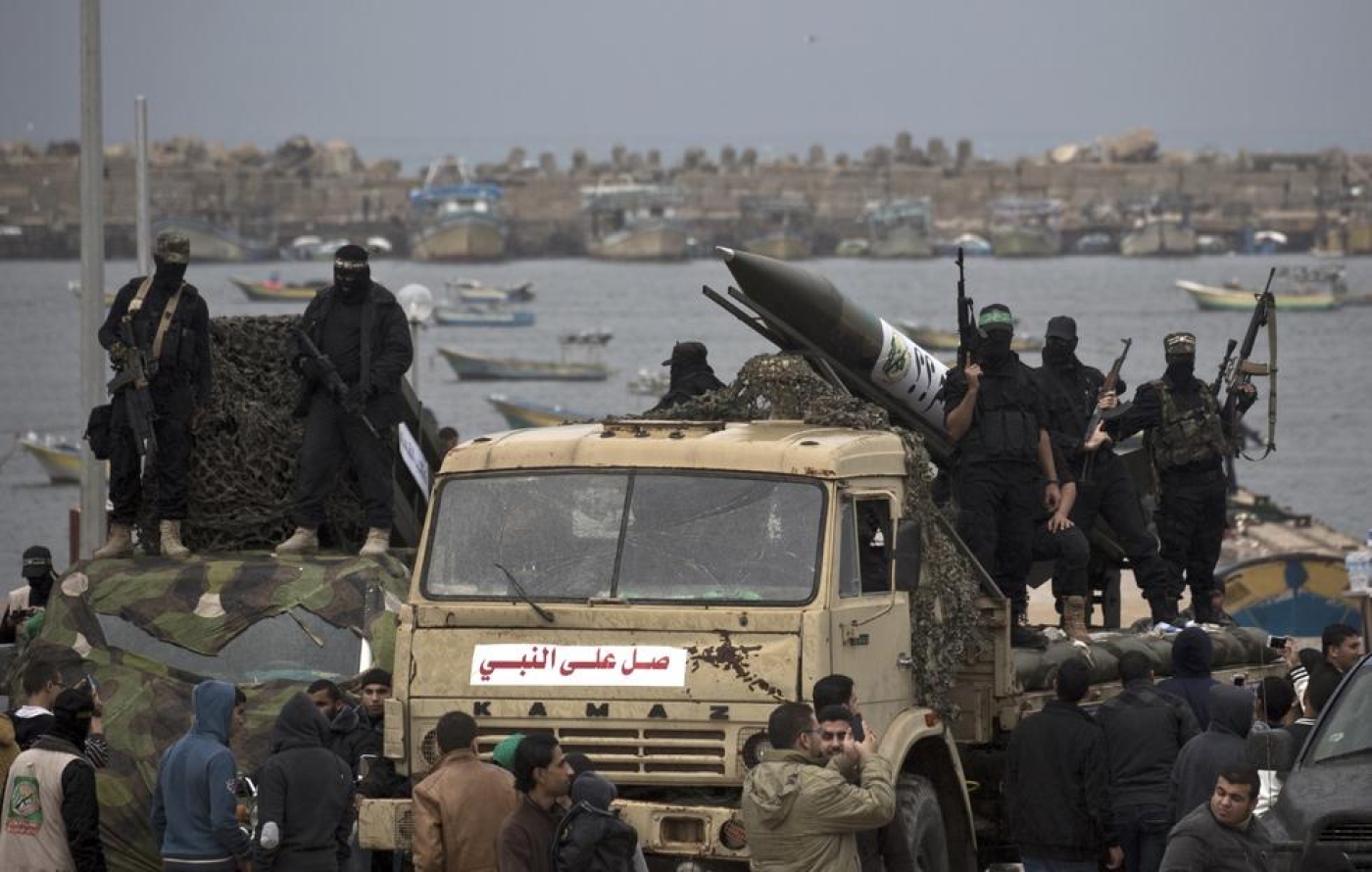 Palestinians of the Ezzedine al-Qassam Brigades, Hamas' armed wing, display a Gaza Strip made M75 rocket during a parade marking the 27th anniversary of Hamas’s creation on 14 December, 2014 (AFP)
By
Mamoon Alabbasi

Syrian President Bashar al-Assad has long accused the Palestinian movement Hamas of arming and training Syrian rebels fighting against his rule following the March 2011 uprising, inspired by the Arab Spring.

In a recent interview with the Swedish newspaper Expressen, Assad went as far as to charge that Hamas "supports al-Nusra Front", the al-Qaeda affiliate in Syria, echoing - ironically - Israeli Prime Minister Benjamin Netanyahu, who likened the Palestinian movement to the Islamic State (IS).

For its part, the Palestinian movement has repeatedly denied any military involvement in the Syrian conflict, despite siding politically with the popular uprising against Assad, and hailing "the heroic people of Syria who are striving for freedom, democracy and reform".

Hamas had maintained that its leaders left Damascus to avoid being drawn into the Syrian conflict, following failed attempts by the Syrian government to portray the Palestinian movement as being on Assad's side.

Hamas also recently denied any links to Aknaf Bait al-Maqdis, a Palestinian armed group battling against pro-Assad forces - as well as against IS militants - in the Yarmouk refugee camp in Damascus.

However, last week Syrian rebels from Ahrar al-Sham group said they had sought and received advice from Palestinians in Gaza on how to maintain tunnels used to fight pro-government forces in the Idlib countryside.

'Our brothers in Gaza'

"The ground here became damp and began to fall on us…and some of our youth were trapped inside. So we spoke to those with expertise, our brothers in Gaza, may God reward their good deeds," Abu Musaab was quoted as saying.

"We consulted them regarding the problem and they advised us to bring in wood (plates), sending us video segment showing us how they do it and we replicated that," Abu Musaab added.

His announcement was reported in a number of Arabic websites, including both pro and anti-Assad outlets, but with the addition that the Palestinians in question were members of Hamas, even though the Syrian rebel did not specifically name them.

It is not the first time that such suggestions were made. In April 2013, the London Times newspaper, citing unnamed Western diplomatic sources in contact with the Syrian government and opposition, claimed that the armed wing of Hamas, Ezzedine al-Qassam Brigades, were training rebel units belonging to Free Syrian Army.

The Times report, whose content was denied by Hamas, also alleged that the Palestinian movement had been aiding the Syrian opposition with tunnel digging, which are used to launch attacks on government forces.

And in June 2013, the pro-Hezbollah al-Akhbar newspaper reported that "sources close to Hezbollah and the Syrian regime claim that Hamas had a role to play in the battles of Qusayr, [where tunnels] … had been dug using small Iranian devices that Hezbollah had transferred to Hamas."

"Some of the explosives, they added, were found to contain electronic chips that Hamas had acquired from Iran and Hezbollah," the Lebanese paper said.

However, testimonies from inside Syria point to the involvement of former members of Ezzedine al-Qassam Brigades, who are not only no longer working with Hamas but also have become critical of the Palestinian movement over its participation in politics and indirect ceasefire agreements with Israel.

"There are Palestinians from Gaza, who have split from Hamas or from smaller militant groups [but not from Islamic Jihad] and are fighting in Syria. They have special expertise in tunnel digging or rocket making," Ibrahim Khader, a Palestinian journalist covering the conflict in Syria, told MEE.

"These Palestinians are not in Gaza, but from Gaza. I know them in person and I have spoken with them; they are Palestinians who have split from the resistance movement (in Gaza) to go to Syria," added Khader, who is a frequent freelance contributor to MEE.

Khader said the former Qassam members, who do not wish to be identified, had been "giving their expertise to what they perceive as Islamic factions in Syria, and not to Ahrar al-Sham alone".

"They (former Qassam members) have helped the Syrian rebels with tunnel digging as the Syrians' experience with the collapsing tunnels is limited," said Khader, adding that they had also "taught the Syrians how to develop Grad-like long-distance rockets."

According to Khader's estimate, the total number of Palestinians who have joined the Syrian rebels from Gaza does not exceed 200, but, he adds, most of them are highly experienced in military skills, including making explosives.

They have been trained by Qassam members, some of whom could have been coached militarily by Iran or Hezbollah, which would explain why the Lebanese movement might have suspected the participation of Hamas in the fighting alongside the Syrian rebels.

"Today Hamas is in a tough spot. It made moves towards reviving ties with Iran and Hezbollah but they (Tehran and the Lebanese movement) have responded with coolness, demanding a high political price," said Khader.

"Hamas is asked to publicly back Assad," said Khader, adding that such a U-turn could not be contemplated by the Palestinian movement, which wants its "stances to be based on principles, not opportunism".

"Besides," Khader said, "the vast majority of people in Gaza are with the Syrian uprising, save a minority of leftists and some others who switch sides to what benefits them at any given moment."

'Both are fighting against tyranny'

MEE has sought to obtain clarifications from the Syrian rebels in Idlib countryside with regards to the affiliation of the Palestinians who have helped with the tunnels, but has so far been unsuccessful in reaching them.

However, Emad Karkas, a Syrian journalist in Idlib, told MEE that the general view amongst critics of Assad is that the Palestinian cause and the Syrian one overlap, "as both are fighting against tyranny".

Assad had been using the suffering of the Palestinian people for political gains, to "shield him from criticism" with regards to his inaction towards Israel as it continues to occupy the Golan Heights for over 40 years, while also utilising their cause to serve as distraction regarding "the persecution of the people," said Karkas.

"After the (March 2011) revolution of dignity, the regime has not shied away from oppressing the Palestinians (in Syria) … shelling them, besieging them and starving them," Karkas added.

The view from the Assad camp is radically different. To them, they are still supporting "the resistance" against Israel, despite "the betrayal of Hamas". They maintain that even as recent as last summer, Syrian weapons were used by Hamas to counter Israel's Operation Protective Edge, a claim denied by the Palestinian movement. 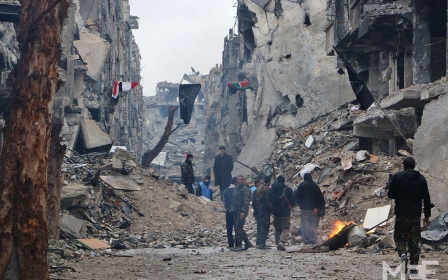