Cheap labour, US-China tensions and controversial tax-free access to the US market increasingly draw garment manufacturers and buyers to Egypt 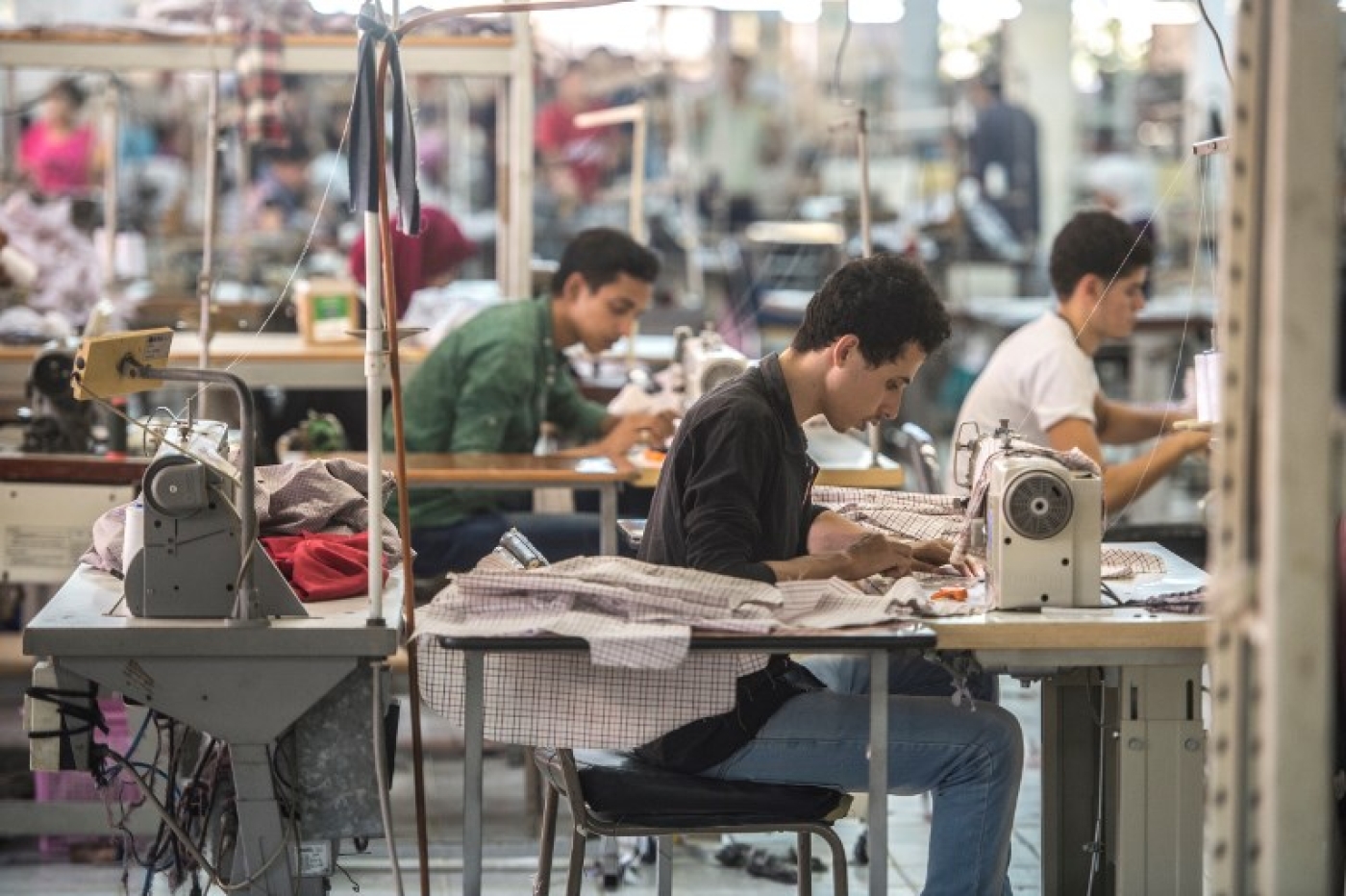 CAIRO - The real winner of any future US-China trade war might very well be Egypt.

Then a senior Chinese executive at its telecoms giant Huawei was arrested in Canada on a US warrant relating to renewed Washington sanctions against Iran, sparking a new round of recrimination.

With lingering uncertainty, rising labour costs in East Asia and a scheme that gives Egyptian manufacturers tax-free access to the US market so long as Israeli materials are used, Asian textile and garment manufacturers and Western buyers are increasingly turning to Egypt, they told Middle East Eye at a conference in Cairo last month.

Official delegations and companies from China and the US attended the Destination Africa conference to scope out business opportunities and bolster trade.

A manager of an Egyptian textile firm, who asked to be anonymous over concerns that he could face repercussions for speaking to journalists, told MEE: “We are hearing China could move up to 20 percent of production to Egypt and elsewhere, either by setting up shop, through mergers or full acquisitions of local companies.

"Part of the attraction is cheap labour and faster shipment times to the USA and Europe."

Also driving the change in garment sourcing is that China itself has a burgeoning domestic market for clothing that needs to be met, expected to be worth $341bn by 2020, larger than the European Union’s $303bn market, and the US market worth $289bn, according to Euromonitor International forecasts.

“China is going to invest abroad and it will increase very rapidly,” said Zheng Jian, international project director at office for social responsibility for the China National Textile and Apparel Council (CNTAC), at the event.

But what may really trigger investment is the US-China trade war, uncertainty over which is pushing Chinese manufacturers to look for new hubs to avoid potential tariffs of 25 percent into the US.

US buyers are also expecting sourcing from China to drop in the near future, according to 67 percent of buyers recently polled by the United States Fashion Industry Association (USFIA).

“Protectionism is on everyone’s agenda, and it is affecting business decisions...it’s a concern for producers,” said Christian Schindler, director general of the International Textile Manufacturers Federation, at the event.

Egypt is particularly attractive as a result of its Qualifying Industrial Zones (QIZ), a programme that allows Egyptian manufacturers to export garments to the US duty-free if at least 10.5 percent of products used in a garment are Israeli.

The zones were established by the US Congress in 1996 to "normalise relations" between Egypt and Israel, and has generated over $8.6bn in exports since 2004, according to the Readymade Garment Export Council of Egypt (RMGEC).

But the scheme has also raised concerns among Egyptians who reject normalisation of relations with Israel and specifically protested against QIZs during the 2011 uprisings. Last year, exports from the QIZs were worth $752.7m while in the first half of 2018, exports to the US grew by 25 percent, the highest growth rate among the US’s top 25 suppliers, according to QIZ Egypt figures. QIZ exports account for 46.7 percent of Egypt’s total exports to the US.

While the Trump administration threatens protectionist measures by raising tariffs on imports, the “QIZ is pretty safe as it's a tripartite agreement, no one will touch it,” said Eihab El Zaher, export manager at Sweet Girl, an Egyptian garment producer, and member of the RMGEC.

Egypt wants to bolster the current $2.4bn in garment and textile exports, roughly split between the EU and US, to $10bn by 2025. If that figure is achieved, around $5bn or more would be destined for the US, significantly increasing the amount Israel will net through the QIZ agreement. Chinese firms will also benefit from the QIZ agreement, and directly bolster Israeli exports.

Such an uptick in exports is considered probable given the historical trajectory of other garment manufacturers to reach over $5bn in annual exports, said experts.

“It took Bangladesh eight years, Vietnam seven years, and Cambodia five years, so it takes between five to 10 years to move from the first $1bn to the threshold of $5bn,” said Navdeep Sodhi, partner at Switzerland-based Gherzi Textile Organisation, at Destination Africa.

Key to Egypt expanding significantly will be Chinese investment. “The US says it is coming to Egypt as an alternative to China, and we can see the Chinese are interested in investing in Egypt,” said Sherin Hosni, executive director of the RMGEC.

However, members of Egypt’s General Authority for Investment (GAFI) were apparently unable to provide Chinese investors with accurate figures on infrastructure costs at Destination Africa, prompting one Egyptian textile manufacturer who attended the closed-door meeting to mimic shooting himself in the head when he described it to MEE.

Nonetheless, overall Chinese investment has surged in Egypt, with close to $6bn committed over the past four years, while $18bn in deals were signed with Chinese companies during President Abdel Fattah al-Sisi’s visit to Beijing in September, including railway, real estate and energy projects.

According to a Chinese businessman from a major Shanghai-based company that exports garments globally who wanted anonymity, Egypt will be a major sourcing hub for Chinese companies as he expects up to 50 percent of Chinese production to relocate.

“I think a lot of production will move outside of China, and Egypt will benefit due to the [free trade agreement]. Due to the trade war (with the US), companies don’t like uncertainty so it will drive investment (in Egypt),” he said.

Asked about Chinese firms being willing to source from Israel in order to fall in line with QIZ requirements, he said it was a formality. “It is mainly about having the right paperwork, which can be arranged, as you don’t have to import what is stated (10.5% from Israel). It is the FTA that is important,” he said.

To attract foreign investment, Egypt has established a new industrial city in New Suez, slated to open at the end of the year, and allocated 1.2 million square metres of land in the industrial zone of El Minya in Upper Egypt. Foreign companies can employ up to 25 percent of its workforce as non-Egyptians.

What could be a particular growth driver of Egypt’s garment exports is the expansion of Hong Kong-based Li & Fung, the world's leading supply chain solutions partner which connects buyers, retailers and suppliers for consumer brands and retailers, in the country.

“Our short-term focus is how to scale up in Egypt, and then start in other (African) countries in a bigger way,” said Jason Kra, FRC division president at Li & Fung, at Destination Africa.

Yet while Egypt offers favourable investment terms to foreign companies - Turkish and South Korean firms are already established at QIZs – Egyptian companies may feel the squeeze and are looking to move south.

“Ethiopia is giving us more options,” said the production manager of a family-run Egyptian textile company who wanted anonymity because he also feared repercussions he could face in Egypt for speaking to journalists.

“In two or three years' time, Chinese companies could kill the market here, and are tax-free to get set up, while we don’t have that advantage. We are going to move to Ethiopia as electricity is half the price, wages are as low as $30 a month, land is free (at industrial zones), and they also have an FTA with the USA.”