Made in Egypt? The quiet garment scheme making Israel millions

The US Congress enacted the tax-free programme to normalise Israeli-Egyptian relations. BDS activists say it's gone too far 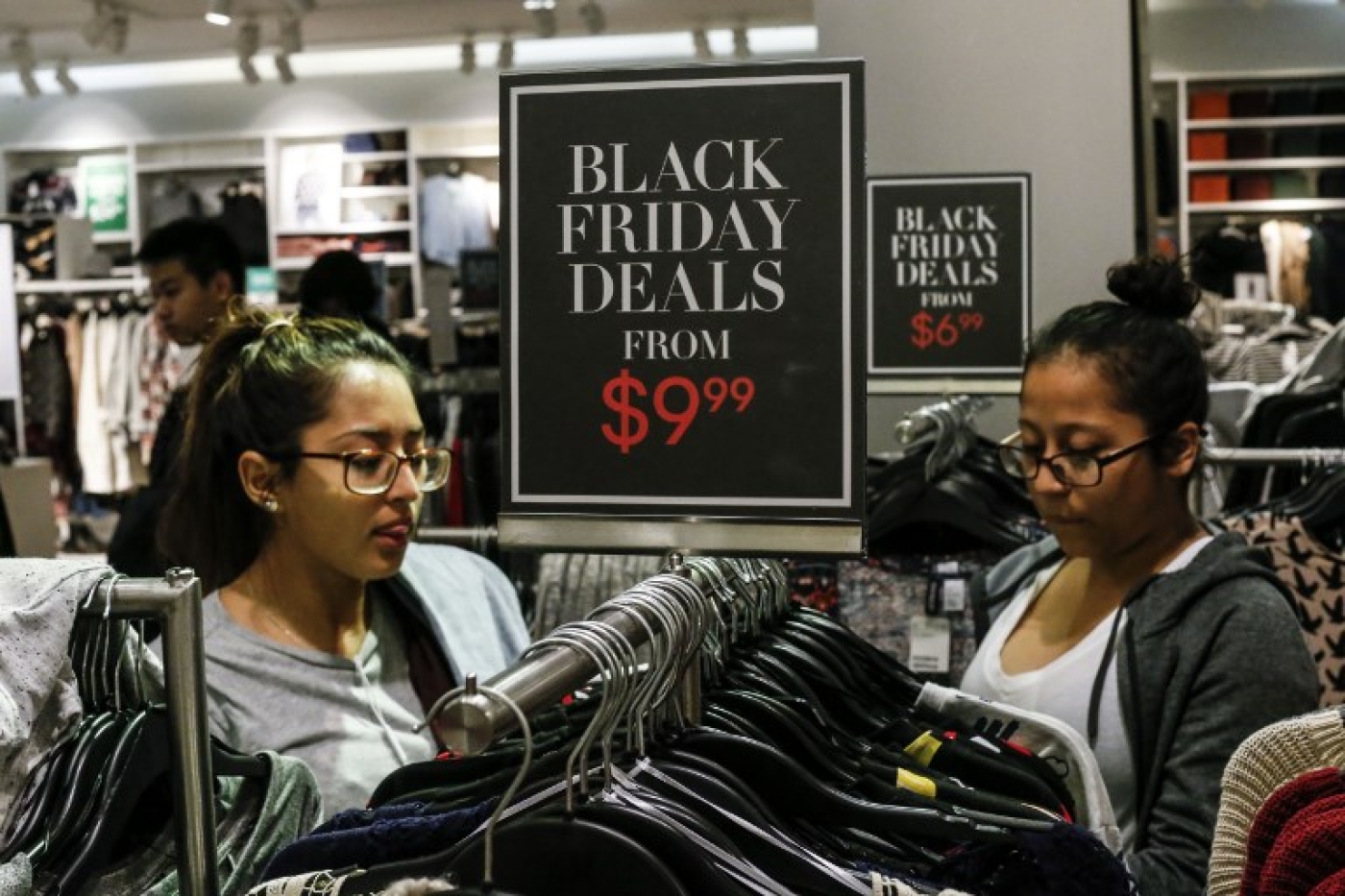 CAIRO – Activists are targeting Disney and other brands over links to a contentious scheme that allows Egyptian manufacturers to export garments to the US tax-free so long as Israeli materials are used.

The quietly promoted programme, known as Qualifying Industrial Zones (QIZ), was enacted by the US Congress in 1996 in an effort to "normalise" relations between Israel, Egypt and Jordan, through economic cooperation.

Through QIZs, Israeli manufacturers supply at least 10.5 percent of products used in a garment. Then Egyptian factory workers in 705 QIZ-certified factories sew the final product which is exported to the US and exempted from taxes of between 5 and 40 percent, but typically at a 15 percent average. 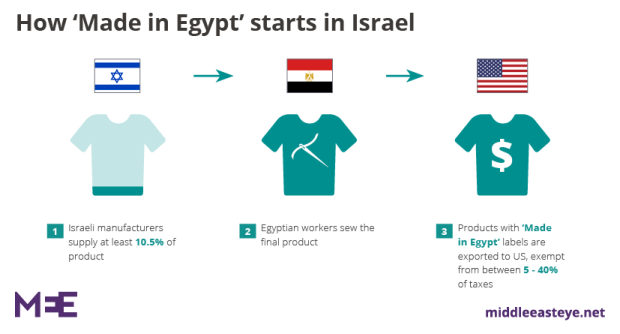 When a consumer buys garments from brands that include, according to the Egyptian Readymade Garments Export Council, Gap, Levi's and Ralph Lauren, there is no mention of the Israeli component on clothes' labels. They only say "Made in Egypt".

Since its launch in Egypt, the country has more than doubled its garment exports to the US and has generated some $8.6bn, according to the Egyptian Readymade Garments Export Council (ERGEC).

The scheme, however, raises major concerns for Egyptians who reject the normalisation of relations with Israel and specifically protested against the QIZs during the 2011 uprisings.

"QIZ is hated in Egypt for linking Egypt to the Israelis," said Ramy Shaath, a coordinator in Egypt for the BDS movement.

After a nearly seven-year economic slump, Egypt is looking to get back on its feet by kicking its garment and textile sector into high gear and take advantage of rising costs in East Asia, a plan laid out at Destination Africa, a key trade conference held in Cairo last month.

Honestly, your best collaborator is AIPAC ... did you know most AIPAC members didn't know about QIZ?

Middle East Eye understands from conversations between trade officials, diplomats and businesspeople at the conference that one way Egypt plans to boost the sector is through QIZs – and using the pro-Israeli lobby group the American Israel Public Affairs Committee (AIPAC) to promote it.

"Honestly, your best collaborator is AIPAC ... did you know most AIPAC members didn't know about QIZ?" a former US trade official told an Israeli diplomat.

With AIPAC "having so much power"” and spending a lot of time "on the Hill," the lobby group could help bolster business and the "peace process," the former US trade official said.

AIPAC and QIZ Egypt did not respond to MEE's interview requests.

But Shaath said that as Egypt ramps up its QIZs, he and his BDS counterparts in Ramallah and Jordan – where QIZs are also in operation – are planning joint initiatives to protest the scheme.

Egypt is highly attractive as a sourcing hub for garment and textile companies as a result of its low wages and duty-free access to the US market, the largest clothes buyer on the planet.

The sector is currently worth $2.5bn in annual exports and employs some 1.5 million Egyptians. Egyptian officials at the Destination Africa conference, which promoted the continent as a "new frontier" in the sector, want to see those figures increase.

Tax-free exports put Egypt at a distinct advantage over China, Bangladesh and Turkey, the world's three largest producers. And one way it has been able to do this is through the QIZ scheme.

"Products enter the US as Egyptian, but if a product is 100 percent Egyptian, so not part of QIZ, it is not exempt from tax," said Shaath.

The QIZ, he said, was mis-sold to the Egyptian public when it was first launched, with the government promising exports of over $4bn a year. Egypt had actually wanted a full free trade agreement with the US, not just QIZ – and held out for one in vain.

"Egypt wanted a [free trade agreement] like Israel has with the US, not a lesser-grade one. Essentially, it was a way to squeeze Egypt to agree to QIZ," said Shaath.

While Egypt has been able to double its exports to the US since the QIZ launch, Shaath said the programme has also been beneficial for Israeli exports to Egypt which have leapt from $32mn in 2004, to $93mn a year later, and today worth $125mn.

Hypothetically, the lost potential import revenues for the US, calculated at the average 15 percent tax rate, is an estimated $1.29bn since 2004. Meanwhile, Israeli enterprises, based on the minimal requirement input level of 10.5 percent, have earned some $903m.

As the head of an Israeli printing firm at Destination Africa put it: "Look, innovation is the only way we [Israeli businesses] can survive."

However, according to Shaath, few Israeli goods actually enter Egypt as they are not competitively priced.

"Basically, an Israeli guy sells a bill of goods but there's no actual product. The Egyptian manufacturers realise they have to pay the Israelis 10.5 percent as a commission to export to the US without taxes. If this is known to US customs, then it's illegal. It would indict not only the Israelis selling documents but also Egyptian factories using them," said Shaath.

The BDS movement, he said, is working on a legal case on the matter.

According to the ERGEC, there were allegations of this happening at one Egyptian company some three years ago. "I can assure you it is not happening today," said a member of the ERGEC.

While the QIZ has arguably been advantageous for Egypt, it has been significantly more so for Jordan. Before the QIZ agreement, in 1998, Jordanian garment exports to the US were just $3.3mn. Within five years, that figure reached $1bn.

With the US accounting for around half of Egypt's garment exports, Egyptian manufacturers want to get exports back to former levels – and, with a 10.5 percent cut at stake, so do Israeli companies.

"About 30 percent of my exports are to the US through QIZ, which is a big plus," said an Egyptian garment manufacturer at the conference.

While the drop in exports to the US was attributed to buyers being wary about further instability in Egypt, another reason was Disney.

In February 2016, the entertainment giant pulled out of Egypt when garment manufacturers failed to meet its International Labour Standards Programme (ILS).

Some 60 Egyptian companies had previously supplied certified Disney clothing and textiles before the pull-out. According to Egyptian officials, talks are currently under way in conjunction with the ILO to get Disney back into the country.

According to the former US trade official at the conference who was speaking with an Israeli diplomat and an Egyptian businessman, Disney will return, and QIZ was instrumental in getting the entertainment giant back.

I will tell them: ‘Be aware that this will open up a major issue in the hearts and minds of Arabs, and lead to a boycott

"Do you really want us to be telling nice Jewish families vacationing at Disney World that they're not going to get products to come into this country, to your parks, made under the Israeli [free trade agreement]?" the former trade official said she had told Disney.

Disney did not respond to repeated requests for comment from MEE.

Shaath said he and other BDS activists plan to begin their joint initiative against QIZs with a letter to Disney.

"I will tell them: 'Be aware that this will open up a major issue in the hearts and minds of Arabs, and lead to a boycott.' My advice to them is to rethink it: is it worth it?" Egypt Turmoil
Meet the people living in graveyards in Egypt