How 'vocabulary of the revolution' is changing in Syria's Eastern Ghouta

In former rebel stronghold, residents say they have to mind how they speak now under government control 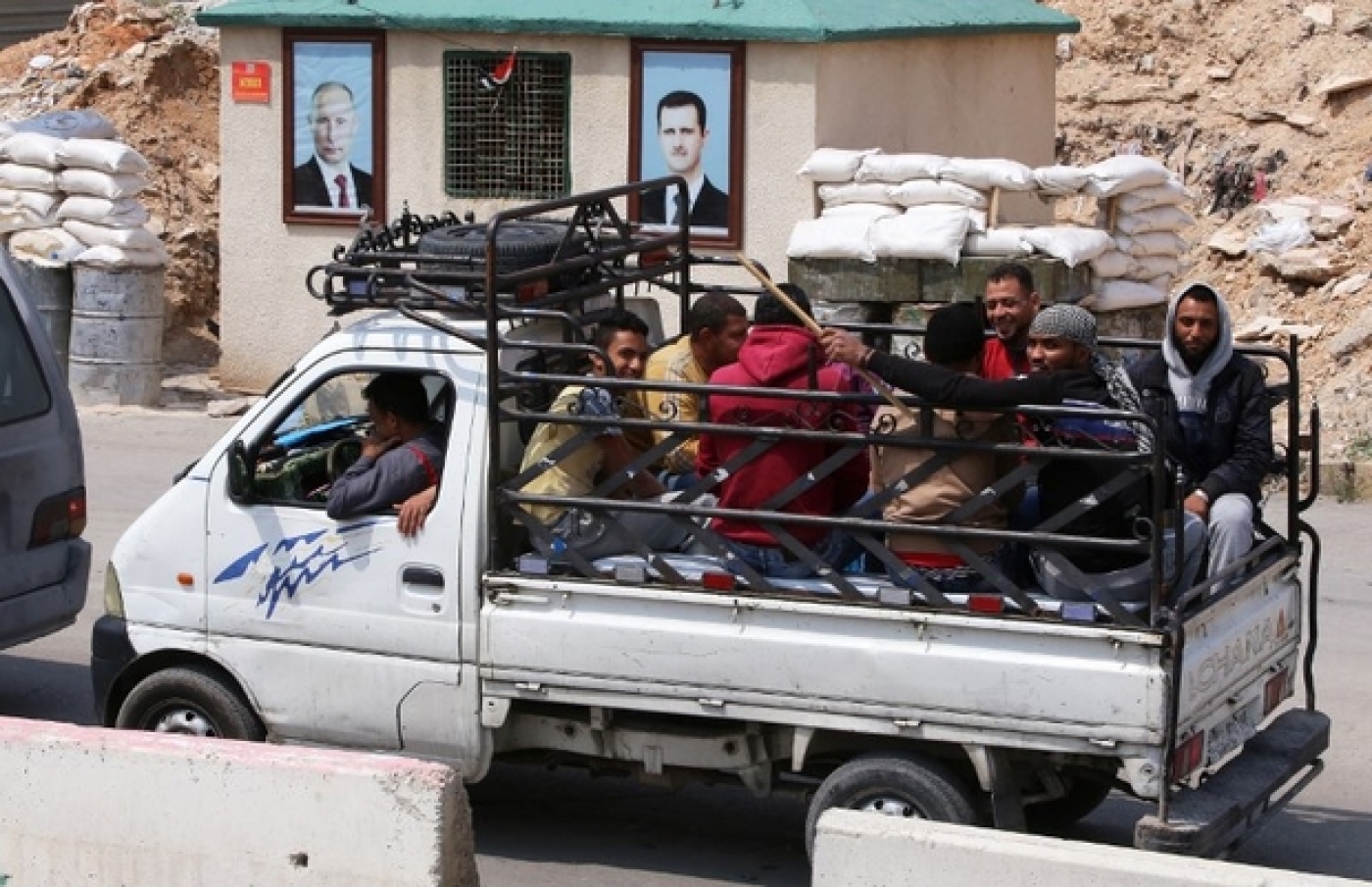 The 27-year-old, who lives in the former opposition-controlled Eastern Ghouta suburbs, hoped to register for university in the capital. But first, he wanted to check with the government official sitting on the other side of the desk whether he’d likely be pulled aside for mandatory military conscription on the way to campus.

“I asked them, ‘What’s going to happen with army service postponement, now that guys from the liberated territories can finish their [university] studies?’”

Though he laughed while retelling this story to Syria Direct, it was a slip of the tongue that could have cost him dearly. “Liberated territories” is a term often used by pro-opposition Syrians to describe parts of the country, like Eastern Ghouta, that were “liberated” from the government by rebel fighters after 2011.

The government employee looked up at him. “You mean the territories that were under control of the terrorists?” he asked.

'Rebels' have become 'terrorists.' The 'revolution' is now the 'crisis'. That’s just the reality we’re in

Yasseen needed to think of a way - and fast - to fix his mistake. “No I mean the territories that were liberated from the terrorists.”

Although he made it out of the office with no further questions asked, Yasseen’s fears weren’t unfounded. Tens of thousands of ordinary civilians and pro-opposition activists have disappeared into Syrian government prisons since the uprising first broke out in 2011. Thousands are now turning up dead.

And as the Syrian government now reasserts its hold over the once opposition-held East Ghouta suburbs, Yasseen and other residents say they are forcing themselves to forget a “vocabulary of the revolution” learned and internalised under an airtight five-year siege that kept some 400,000 residents in a linguistic cocoon beyond earshot of the Syrian government.

Policing this wartime “dialect” has become a serious matter of personal safety. And yet residents living inside newly government-controlled East Ghouta tell Syria Direct of an “overnight” - and at times absurd, even darkly humorous - return to the paranoia and self-censorship of Syria’s pre-2011 years.

The actual names of all sources quoted in this report were withheld to protect their identities.

Ghouta is one of a handful of former rebel strongholds across Syria now under renewed control of the government, following a series of sweeping victories.

Starting last December, an all-out assault by the Syrian army and its allies devastated the already starved and bombed-out pocket, while rebels responded with sporadic bouts of deadly shelling and mortar-fire on nearby government-held territory.

By April, the more than five-year siege was finally over as pro-government forces took full control of East Ghouta and tens of thousands of civilians and rebel fighters boarded evacuation buses north to opposition-held Idlib province.

For those who stayed behind, life is settling into a strange, guarded calm. The government’s double-starred flag now dots the ruins of East Ghouta's neighbourhoods. Women gather for state-sponsored shopping festivals beneath posters of a smiling President Bashar al-Assad and his father, while young Ghoutans cautiously head into downtown Damascus to attend university.

While there are visible signs of the Syrian government's return, the linguistics of several years of opposition rule are still deeply ingrained.

As in Daraa and other areas of the country that remained under prolonged opposition control, East Ghoutans developed a “vocabulary” reflecting their everyday reality.

Words that, before 2011, could have been cause for imprisonment if used publicly became part of everyday conversation: “revolution,” “rebels,” “Assad.” The Syrian “government” became the Syrian “regime,” as people grew comfortable openly criticising political leaders for the first time in decades.

“Seven years under the control of a certain militant group or...a certain policy - you get a dialect that’s tied to your living conditions,” says Abd a-Rahman Murad, a university student from Douma, the largest city in East Ghouta.

Bread, a basic and sometimes scarce food item during the siege, was simply khubz - the Arabic word for bread - when produced locally in East Ghouta, Murad explains.

“But bread that was brought in via aid convoys, or from the regime’s bakeries - we called it khubz Assadi, meaning “Assad bread.”

In one town within East Ghouta, father of three Abu Raed al-Hassan says he still lets slip some of the vocabulary he adopted during the years of blockade and bombing - although usually behind closed doors, when he’s at home with his wife and children.

“You say things like ‘regime,’ or ‘revolution,’ or ‘back when we were besieged’,” he tells Syria Direct via WhatsApp.

Sometimes, in the quieter moments when he remembers friends and family members killed in bombardments over the years, al-Hassan uses the verb “martyred,” for some a loaded term that was once plastered across East Ghouta’s dozens of pro-opposition Facebook pages as casualty counts mounted.

Conversations behind closed doors are one thing, al-Hassan says, “but outside the house it’s impossible for me to make a mistake. Every word might be taken into account”.

In the days after 33-year-old Mohammad Rateb left East Ghouta aboard the evacuation buses to Idlib back in April, he sent WhatsApp messages to family members who’d chosen to stay behind.

He sent a simple greeting: “Hey, how are you guys? What’s new?”

What he got in return, Rateb says, was a flurry of coded language and virtual shushing from nervous family members, fearful of even the off-chance that government minders were tracking or surveilling their online conversations.

“The first thing they said was: ‘Don’t talk any nonsense’,” Rateb tells Syria Direct from Turkey, where he now lives, after having left Idlib.

Months later, Rateb says he’s now grown accustomed to what can and cannot be said, by navigating a series of vague codewords used in phone and WhatsApp conversations.

“People talk to me about everything except for revolution, regime and armed groups,” Rateb says. When family and friends do want to talk politics, he adds, “my people” and “your people” stand in for “opposition” and “regime”.

“They are sitting in the [regime’s] lap. Every word is accounted for.”

Current East Ghouta residents paint a similar picture of face-to-face interactions in their own neighbourhoods. When asked what he and others typically say to one another in public, father of three al-Hassan laughed. “‘Everything is good!’” he says sardonically.

Some neighbours, he jokes, have gone so far as adopting an over-exaggerated Latakia accent, common among Syrian army officers, and poked fun at in the popular, low-budget comedy series Dhiaa Dhayaa.

“Now everyone is saying [the casual greetings] 'keefak ya habeeb’ and ‘keefak ya ghali’,” al-Hassan tells Syria Direct.

When asked about how life was changing in an East Ghouta town now back under government control, one local resident seemingly had no words at all; he simply texted a series of before-and-after self-portraits.

In the first, he wears a long, full beard and keffiyeh scarf wrapped around his head in the familiar style of East Ghouta’s rebel fighters, and apparently indicative of his support for the opposition. But the second, a more recent photo taken since the government’s takeover, shows him sporting trimmed facial hair and taking a drag on an arghileh water pipe. He offered no explanation.

It’s these subtle, unsaid transformations that gives Murad, the mechanical engineering student, pause as he cautiously goes about his own daily life.

Just months ago, under devastating bombardment, he was volunteering with pro-opposition civil society organisations in his hometown of Douma. But nowadays, he must cross checkpoint after checkpoint on the highway that leads into central Damascus, and his summer courses in the city.

Murad avoids the word “revolution” in particular, he says, as he fears “interrogation” if he slips up.

“To talk in one specific way for seven years, then to turn back on all that overnight... it’s something that makes me both laugh and cry,” Murad tells Syria Direct from his home in Douma.

“‘Rebels’ have become ‘terrorists.’ The ‘revolution’ is now the ‘crisis’,” he says. “That’s just the reality we’re in.”