Recently Syrian families are finding out about loved ones' fates, while the move is seen as a bid to avoid charges of crimes against humanity 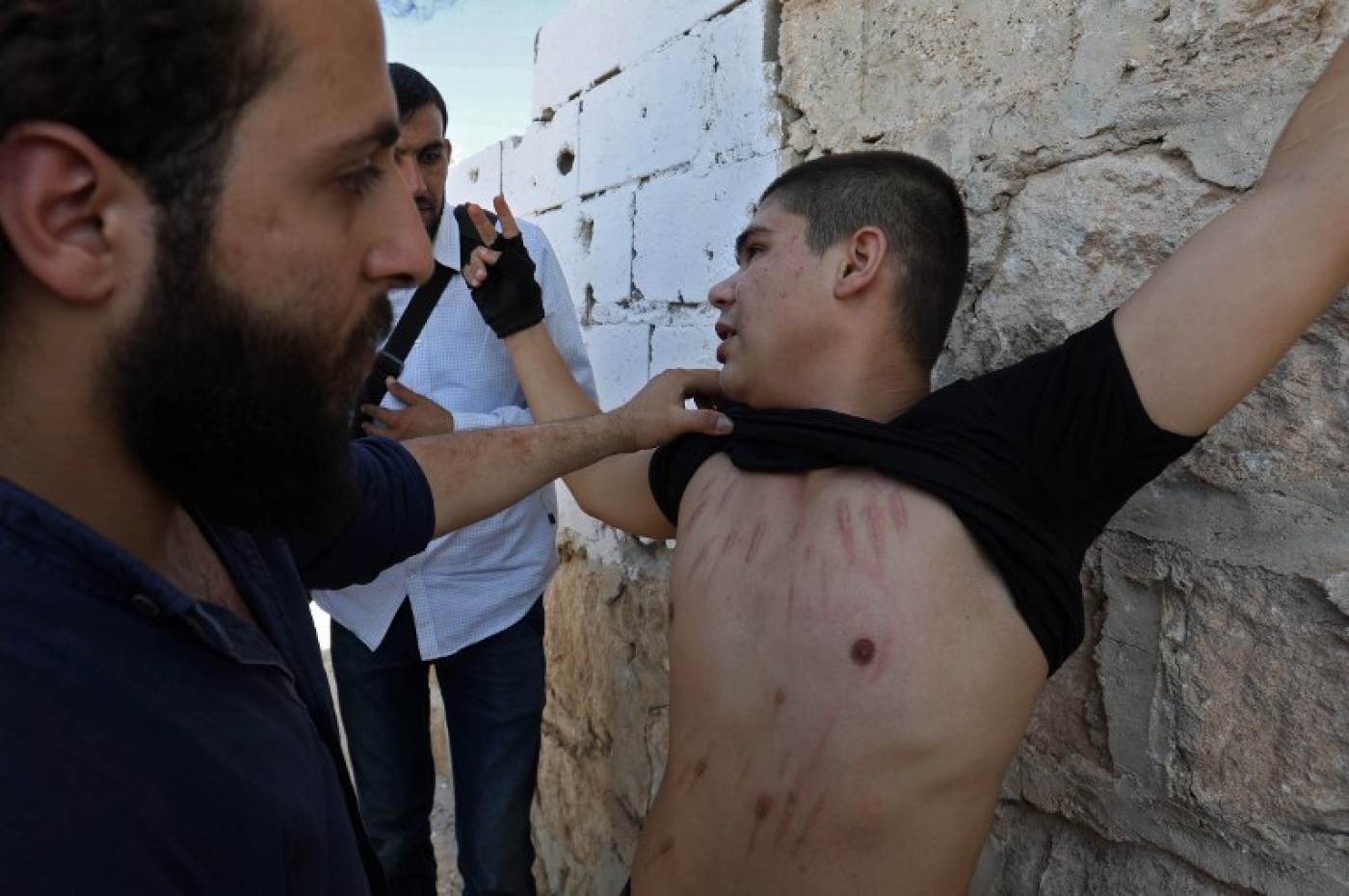 A former prisoner of the Syrian government shows rebels scars from his time in prison (AFP)
By
Mohammad Abdulssattar Ibrahim for Syria Direct
, Barrett Limoges
, Ammar Hamou for Syria Direct

AMMAN - Abdulrahman al-Dabaas’ brother, Islam, was wearing a sweater that bore one word - “Freedom” - the last time they met, through the bars of a Sednaya prison cell in 2012.

Al-Dabaas and his mother were permitted a two-minute visit with Islam, who was picked up by security forces on the streets of Daraya in the Damascus countryside earlier that year.

Abdulrahman remembers Islam looking painfully skinny and frail. It would be the last time he’d see or hear from his brother.

My cousin couldn’t handle the situation. She left without taking the civil registry paper - her shock was so intense

But last week, the family finally discovered that Islam was one among tens of thousands who died in government-administered detention facilities since 2011 after a cousin visited the civil registry office in Daraya last week. The family’s worst fears were confirmed.

“My cousin couldn’t handle the situation,” says al-Dabaas. “She left without taking the civil registry paper [with her] - her shock was so intense.”

Similar scenes have been repeated across Syria since May when the Syrian government first started discreetly closing civil registry files belonging to thousands of detainees arrested or disappeared over the course of the uprising and civil war.

Families have discovered news of relatives during routine visits to local civil registry departments or following unexpected phone calls from local reconciliation committees. As word has spread, crowds have flooded public documentation offices with queues backing up for hours.

Interviews with families of the disappeared, human rights groups and legal experts suggest the Syrian government is now reorganising a messy, labyrinthine bureaucracy of detention records as well as a paper trail that could one day leave officials vulnerable to international prosecutions.

‘What have they done to him?’

A mid-July report by the Syrian Network for Human Rights (SNHR) monitoring group was the first to allege that families were beginning to learn of detained loved ones’ deaths accidentally, with hundreds of confirmed incidents in Damascus, Homs, Latakia, Moadamiyet al-Sham, Hama and Hasakah.

“At the beginning of our investigation, we did not believe the news,” says SNHR chairman Fadel Abdul Ghany.

“Families were just finding out by chance while going to do normal [paperwork], and the clerk told them that their relative was registered as dead on their file.”

Abdul Ghany told Syria Direct that the numbers of newly identified dead among the civil registry rolls are growing each day, with the network so far confirming approximately 350 cases identified by relatives.

It appears that there is no set procedure for informing families, with some learning of changes in ad hoc and inconsistent ways that varied from city to city, municipality to municipality.

Hundreds discovered the deaths by accident during routine visits to the civil registry to file paperwork on behalf of the missing.

Others families have received phone calls from local reconciliation committees, stating that a family member had died and instructing them to change their civil registry status at local offices.

The SNHR report noted that no families had received bodily remains of the missing, an assertion corroborated by several sources who spoke with Syria Direct. In many cases, the cause of death stamped on certificates reads: “Heart stopped.”

As well as the 350 cases confirmed by SNHR, there have also been larger numbers of unconfirmed cases in several other cities across Syria.

As well as the 350 cases confirmed by SNHR, the names of at least 600 dead have also reportedly turned up in the civil registry in Hasakah, in addition to 90 in Hama

During the final week of June, at least 30 Palestinian-Syrian families from camps in Homs and Hama - whose civil documentation falls under the separate administration of the General Authority for Palestinian Arab Refugees (GAPAR) in Damascus - received phone calls from the agency instructing them to go immediately to the civil registry office and change the status of their loved ones from living to dead.

The names of at least 600 dead have also reportedly turned up in the civil registry in Hasakah, in addition to 90 in Hama.

Then on 28 June, officials issued a handwritten list of names from Moadamiyet al-Sham in the Damascus countryside - individuals arrested or forcibly disappeared by Syrian security forces in recent years, some as early as 2013 - declaring them dead. The list was written on paper bearing an Interior Ministry letterhead. About 300 names appeared on the original file, though civil registry officials have confirmed only 170 as individuals who died in government-administered detention facilities.

The file closings have continued, with more calls reportedly being made last week to 25 families of Saydnaya Prison detainees in the southern Damascus town of Kanakar, from the local reconciliation committee.

It is not yet possible to know the full scope of the government’s sweeping changes to the civil registry, or how many of the deceased cases are authentic.

Laith Mattar, a public documentation activist who requested that his real name be withheld for security reasons, told Syria Direct that cases documented so far only concern “those people that the regime is at some point admitting they know something about.

“There are many people who were stopped at checkpoints or were moved between one security branch to another, so it wasn’t well-documented,” he adds. “I don’t think we will come close to knowing the full number of dead.”

For most families, learning of loved ones’ deaths is the first news they have heard in years. And yet others are still waiting.

Wafa al-Ayoubi’s 21-year-old son, Mohammed, left their family home in Damascus one morning in 2014 and never came back.

After five days of frantic searching by al-Ayoubi and other family members, security forces raided the house - with Mohammed in tow - as they searched the premises for supposedly incriminating evidence. The memory of his face, almost unrecognisable from torture, has haunted her ever since.

“I saw my son with my own eyes after he was disfigured and tortured when they raided our house,” she says. “That was from five days of torture… after six years, how does he live? What have they done to him?”

Ordinarily, families, in the company of witnesses, update civil registry status - not the government itself. The changing of records reflects a significant change in policy.

Lama Fakih, deputy director of Human Rights Watch (HRW) for the Middle East, says it amounts to an effort by the Syrian government “to try and turn the page in a very superficial way”, by closing files in a bid to avoid culpability for likely crimes against humanity.

“The reality is that unless we see accountability for crimes perpetrated in this conflict, we are not actually going to see a peaceful transition,” adds Fakih.

Among numerous roadblocks standing in the way of any post-conflict settlement, the question mark hanging over the fate of tens of thousands of detainees disappeared into government custody during the course of the war remains one of the most intractable.

The reality is that unless we see accountability for crimes perpetrated in this conflict, we are not actually going to see a peaceful transition

While it is impossible to know the true number of people who have been arrested or forcibly disappeared since the conflict began in 2011, the number of officially confirmed cases is in the tens of thousands.

The Violations Documentation Center (VDC) monitor has linked the Syrian government to at least 66,922 cases of enforced disappearances since 2011 - 92 per cent of all documented cases. SNHR meanwhile reports that 81,652 people were disappeared between March 2011 and June 2018.

Beyond disappearances, the Assad government has also been accused of atrocities against detainees, with some of the most egregious crimes detailed in an Amnesty International report from February 2017. The investigation charged the Assad government with torture and extrajudicial executions on an industrial scale at the Saydnaya Prison on the outskirts of Damascus - where Dabaas’ brother Islam was last seen.

Between 2011 and 2016, the report said, between 5,000 and 13,000 people were tortured in Saydnaya alone, before being tried summarily in three-minute military trials and hanged from the ceiling.

The international community caught a chilling glimpse of that underworld of Syrian government detention in 2015, with the leak of the now-infamous “Caesar” photos. In August 2013, a military defector - codenamed “Caesar” - smuggled 53,275 photographs out of the government’s forensic archives, showing gruesome images of bodies mutilated and tortured by security officers.

According to Human Rights Watch, 6,786 unique victims could be identified among the massive trove. The vast majority of these victims were abducted by five intelligence agency branches operating around the Syrian capital.

The photos prompted a global uproar and launched a number of initiatives aimed at bringing justice for the families of detainees murdered in government custody.

Recently founded organisations like the Families of Caesar Association have worked to collect evidence and detainee testimonies for use in future prosecutions.

Abdul Ghany sees the first round of closed case files as an experiment by the Syrian government, an attempt to address the messy bureaucracy of detention as military operations wind down elsewhere in the country.

“We think that the regime is trying to check the reaction from the international community toward this behaviour,” says Abdul Ghany, adding that a “weak reaction” may see government departments “continue registering all missing people” in this way.

No Syrian government or military officials have been tried for alleged war crimes, crimes against humanity or other serious international crimes, although several cases have made their way into European courts.

Under the principle of universal jurisdiction, which states that some crimes are sufficiently egregious that foreign courts have jurisdiction to prosecute perpetrators, European courts can hear cases related to the Syrian conflict.

On 8 June, Germany’s chief prosecutor issued an arrest warrant for Jamil Hassan, a high-ranking figure in the Syrian military apparatus. As the head of Syria’s powerful Air Force Intelligence Branch, Hassan had direct oversight over some of the most notorious detention facilities where thousands are thought to have been tortured and murdered.

The arrest warrant is likely to be extended as an Interpol red notice, sending a potential chill through government circles and raising the spectre of increasingly restricted international travel for officials in the future.

“The case of Jamil Hassan and others being pushed by many NGOs are making people talk a lot,” says Bassam Alahmad, a Syrian human rights researcher currently living in exile in Kuwait. “These cases are raising the pressure [to address] these issues.”

But for families of the disappeared, and mothers like al-Ayoubi, legal proceedings in far-away courts bring little respite in the daily search for answers about what has happened to their loved ones.

“As a mum, I will never lose the memory of my son - ever,” she says. “I am constantly living in a spiral of pain and hope. I always hope that I will hear something.” 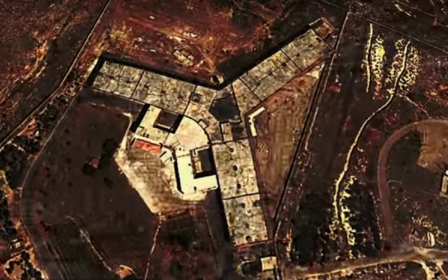