Two years after heavy clashes between the Turkish state and Kurdish militants in Diyarbakir's old city, thousands of people have yet to return 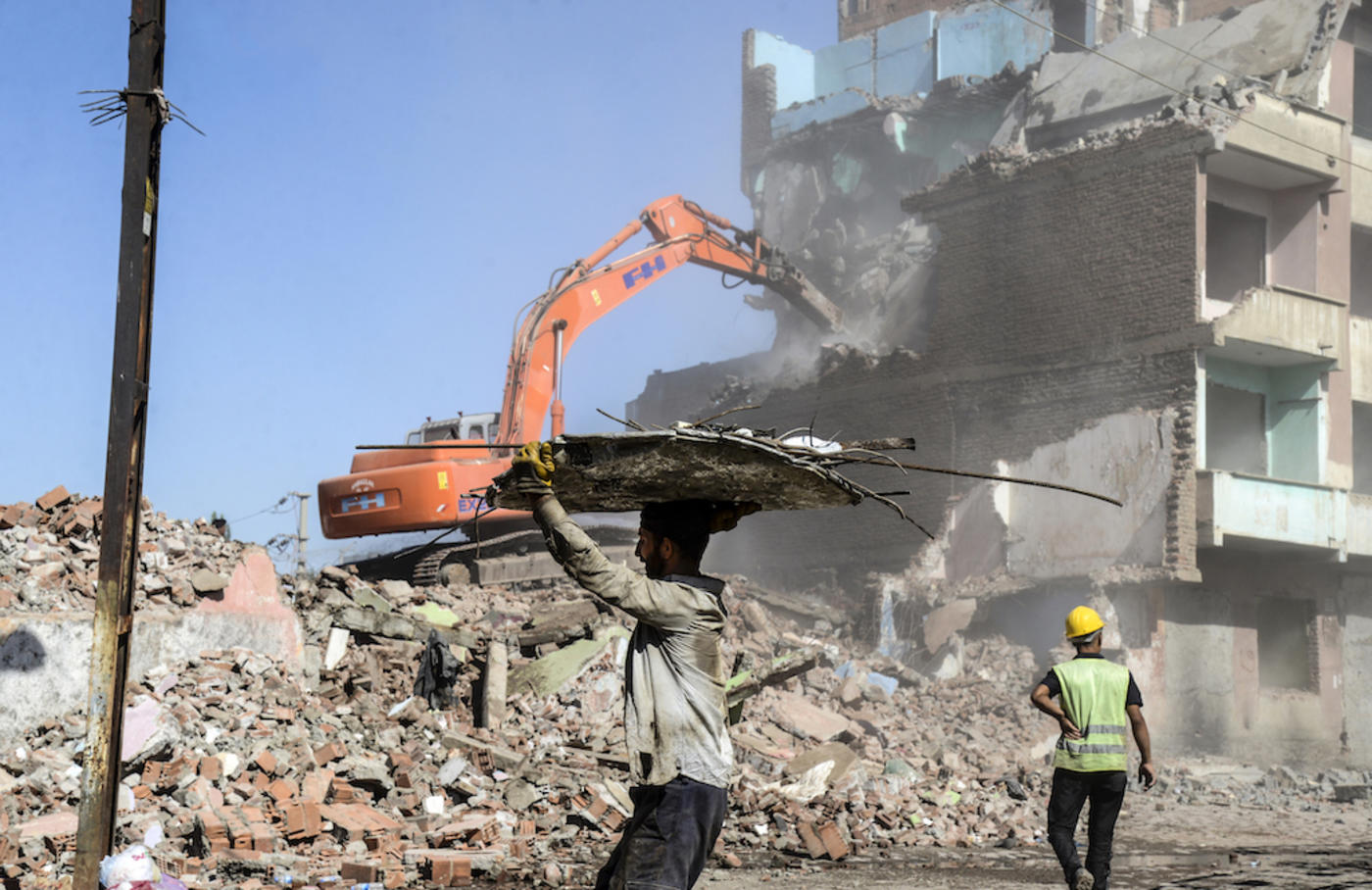 A worker carries wreckage as an excavator tears down a building, during an urban rebuilding project (AFP)
By
Ece Goksedef

DIYARBAKIR, Turkey - The historic old town of Sur, once a crowded tourist attraction, has been largely abandoned. More than 20,000 people left and hundreds of houses were demolished during months of heavy clashes in late 2015 and early 2016.

At that time, violence rocked 22 town and city centres in Turkey's Kurdish-majority southeast, as Turkish security services cracked down on armed fighters linked to the outlawed Kurdistan Workers Party (PKK), who entrenched themselves in urban areas.

“I went to the governor of the Sur district to ask about my demolished house. He cried when he listened to my story," says Abdulhakim Celikbilek, a former resident of Sur.

"Why are you crying? You destroyed me, you destroyed a whole population. You forced 30,000 people to leave Sur and devastated us. I slept on the concrete for months, I didn’t even have a mattress,” he says.

The PKK launched a guerilla war against the Turkish state in 1984. For decades, the war - which has cost more than 40,000 lives - was largely confined to the mountains and rural areas.

In 2013, talks between the PKK and the state led to a ceasefire and a peace process with the goal of ending the conflict. During this period, many areas in the formerly restive region became tourism attractions with many souvenir shops, cafes, kebab houses and parks.

In July 2015, however, the peace process came to an abrupt halt.

The government accused the PKK of moving its weapons to the city centres - under the cover of the ceasefire - and eventually the Turkish army came to Sur with tanks and helicopter gunships in order to clear the area of the Kurdish fighters, who dug trenches and occupied buildings while declaring autonomy from the state.

A 24-hour curfew was imposed in six neighbourhoods for weeks. Most of the civilians left their homes, taking whatever they could carry with them. The ones who held on and stayed had to leave during the clashes.

Since July 2015, open-source data collected by the International Crisis Group indicates that more than 4,000 people, including 464 civilians, have been killed in fighting between Kurdish fighters and the state.

In Sur, at least 24 civilians were killed, including two minors.

Two years on, Sur has been partially reconstructed and opened for resettlement, with another small construction site for new houses. But so far, only the residents of the buildings on the main street have returned after two years of trauma and reconstruction work.

It’s not the same old neighbourhood any more, with more than half of it closed off by police barricades.

People were offered partial payment for their demolished houses, but most would not accept the money. Even if the money was enough to buy a new apartment, they wouldn’t take it, many said, because they don’t want new apartments - they want to return to their old homes and streets.

Mehmet Simsek, whose two-storey house in Sur was torn down, is one of them.

“Me and my three children were screaming with the Ramadan drummer’s voice after we left Sur. We were traumatised. Not only that, I miss my life there. If they told me I owe the state $250bn in exchange for returning to Sur, I would pay it," he said.

The most difficult part of this process was to leave my hometown as if I am an exile. Is it a crime to be a Kurd?'

"I was born and raised there, started a family there. We knew who lived in all the neighbourhood, we shared everything in our lives. I've lived in my new apartment for two years, and I don’t even know who lives downstairs!”

Most of the houses in Sur were two or three-storey buildings, with neighbours sharing joint gardens and enjoying close relations.

“We left our house without taking anything after a mine exploded in our street," explained Simsek.

"After nine days, when the police let us go in to take some stuff, we went directly to see our garden where we used to feed pigeons. It was burnt. We saw our neighbours there, they were also wondering about the pigeons. We left together that day. After the clashes ended in three months, our house was not there any more, it was all torn down.”

Now, the area remains closed and the municipality is considering changing the district into a public garden with some new buildings around it.

Some in Sur regard this plan as a gentrification project.

Celikbilek believes his house was torn down by security forces on purpose. After his efforts to protect his house during heavy clashes, he rejected an offer of money in exchange for giving up his land in Sur.

“I’m 62 years old and was born and raised in Sur. I couldn’t leave my house when the clashes came to my street and stayed there for 18 days - after I sent away my wife and children - in order to protect my house from looting," he said.

He had previously suffered a heart attack and feared that if he stayed too long in the febrile environment that he would end up having another one. So after 18 days, he left his house in the early hours of the morning and fled to a safer area.

“When the clashes were over, I went in to see my house. It was there, my stuff was not even ruined. They didn’t let me stay there so I left again. After a week, I went again - it was all burnt. But the clashes were already over, no PKK was there. It was only the security forces in Sur. It means the state did it, they wanted to clear all the neighbourhood."

He said that he refused to accept money to sell his land, which security services told him had become a "restricted area" and that they would not be rebuilding houses there.

"The state humiliated us. We told them we didn’t want to sell our house, no matter what, but they didn’t accept that," he explained.

"I’m not taking the money, and now they are forcing me to accept another apartment in another district of Diyarbakir. I can’t live there.”

He said that he tried to fulfil his dream of returning home by visiting the restricted area from time to time, but police would only let him stay for a short time.

“The most difficult part of this process was to leave my hometown as if I am an exile. Is it a crime to be a Kurd? Then I’m committing a crime. I am not thinking about my furniture and stuff any more. We can buy new ones. But the yearning, it will never go away."

For those who stayed in Sur, the curfews and constant threat of violence damaged their lives in many ways.

Berivan Dag moved to Sur from the southern city of Adana to live with her husband's family, having gotten married only a month before the beginning of fighting in the city.

But after the violence began, the situation became too much for them, as she struggled to live with four families under one roof in a city under lockdown.

"Such sad times…" she told MEE. "I then got pregnant, gave birth to a baby boy, but he came early since my psychological state ruined my health, and he died two months later.

“Our lives changed a lot. I didn’t even have luggage when we left there, I carried my clothes in plastic bags. I lost all my stuff that I had brought all the way from Adana," Dag added. "My husband has been unemployed since the end of 2015. Without any money, four families under one roof, we had so many quarrels."

Yusuf Olgan, a 15-year-old boy who left school during the clashes, said it was not possible for him to go back to school anymore.

After the bullets started breaking his windows, he and his family rapidly fled their home and went to stay with their grandmother in her village.

When they eventually returned to their city, after spending months collecting money, they were left with no furniture and had to sleep on the floor. Yusuf's father, who worked in construction, was not earning enough to sustain the family. As a result, Yusuf had to go to work as well.

"Many people from Sur looked for apartments to rent and the rents became very high," he said.

"My other brother had to work to make enough money to pay the rent. I would be studying if these operations had never started.”

Almost all the shops on the historical and main tourist streets are open now, but the fighting has seen the number of customers dwindle.

Many were hopeful for restitution, but so far they have found it difficult to even earn what they spent on the reconstruction of their shops.

Cihan, a kebab restaurant owner in Sur, said it would be common for his restaurant to not be big enough to accommodate the sheer number of tourists who came to eat there during lunchtime.

Between 2013 and 2015, the years of the peace process, masses of locals and tourists would visit to the extent that he needed to expand the restaurant.

"Look at the tables now, all empty. Now, no one is coming," he said. "Even the Sur people have left and we lost our loyal customers."

After the clashes intensified in November 2015, he closed his business. There was no curfew at the time, but bullets were flying through his restaurant’s windows and it was not safe.

The restaurant was closed for two-and-a-half years as barricades were erected by police at the end of the street. When it was finally reopened, Cihan had to pour a lot of his own money into rebuilding.

"I devoted myself to make it work because I’ve lost my brother to it," he added, explaining that the fighting caused his brother to have a breakdown and kill himself.

"He had three kids. My father is still taking antidepressants, and I am struggling to maintain his 43-year-old restaurant.”

The Turkish state paid compensation to shop owners for the damage, but that was not enough to erase the hardship.

For Cihan’s family, it was not only a matter of the inadequacy of the sum offered by the state.

"There are others who accepted the money and tried to survive, but it’s not easy under the new circumstances." 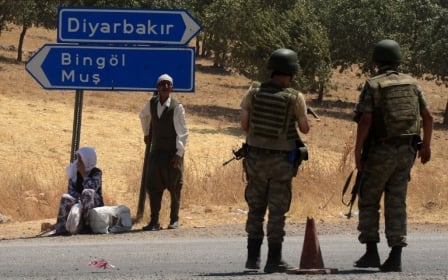