Tensions have increased since Trump’s inauguration, first from Muslim travel ban, then today's remarks about Palestinians Demonstrators were angry at the choice of David Friedman as US ambassador to Israel, the possible moving of the US embassy to Jerusalem and the failure to halt Israeli settlements in Palestine.

At the White House, the crowd gathered amid a blustery twilight with printed signs clutched in gloved hands. About 200 people chanted “Bibi go home!” as the DC Metro Police, a fixture at such events, kept a discrete distance and watched from the warmth of their patrol cars.

“It’s our position that it is not in America’s best interest to have Friedman as an ambassador because he’s biased,” Kristin Szremski, the media director for American Muslims for Palestine, one of the organisations behind the protest at the White House, told Middle East Eye. “It’s not good for Americans because it will hurt our credibility with our global partners, and it’s not good for Palestinians because he supports annexation, and he supports moving the embassy to Jerusalem, which will only inflame tensions in the Muslim and Arab world.”

Those tensions have been increasing since Trump’s inauguration, first by his Muslim ban that was subsequently put on hold by several state and federal courts, and then by his remarks today about Palestinians.

In a news conference held by the two leaders, Trump also made what appeared to be an unscripted remark that he’d like to see his Israeli counterpart “hold off on the settlements for a bit,” while promising that, “We’ll work something out. I think we’re going to make a deal. It’s going to be a bigger and better deal than people understand.”

But Trump’s appointment as US ambassador to Israel of Friedman, whose confirmation is scheduled for Thursday, seems to belie those remarks. Friedman, an Orthodox Jewish bankruptcy lawyer whose longstanding relationship with Trump includes handling some of the latter’s bankruptcy proceedings for his casinos, is staunchly pro-expansion. He’s dismissed a two-state solution, and upon the announcement of his nomination as ambassador, said he looked forward to working from a US embassy in Jerusalem, rather than Tel Aviv, where it is currently located.

“As far as the embassy moving to Jerusalem, I’d love to see that happen,” Trump said this afternoon, while standing next to Netanyahu. “We’re looking at it very, very strongly, and we’re looking at it with great care, believe me. We’ll see what happens.”

When asked about the purpose and outcome of the rally, Szremski said that it was meant to show solidarity.

“We want to show that Jews, Christians, Muslims and others can come together to stand for justice. That’s in direct opposition to what we see coming out of the White House and Israeli policies that are racist and discriminatory,” Szremski said.

“And the things we see coming out of the White House are racist and Islamophobic, and anti-Semitic,” she said, referring to the rising number of threats against synagogues in the US, and the absence of any references to Jews in the White House’s comments about the Holocaust.

Just shy of a mile away from the White House, the second rally formed at the Trump International Hotel, which is housed in a federal building and is the subject of an ongoing financial conflict-of-interest controversy, as Trump now oversees the agency that oversees his hotel.

Alejandro, a Washington DC resident who works near the Trump hotel, said he attended the rally to show his support to what progressives are increasingly calling “the resistance”.

“We’re seeing a threat to democracy like we haven’t seen since the civil rights era,” he told Middle East Eye. “The president seems intent on completely disregarding the American people.” Then he shrugged. “We need to keep showing up.”

Young US Jews speak out

Ethan Miller is with If Not Now, an organisation of Millennial American Jews advocating for the end of the occupation, and one of the organisers of the rally at the hotel. He’s part of a generation of Jews beginning to mobilise against the older and more conservative Jewish establishment, from which they feel largely alienated. He said he’s concerned about what he says are numerous similarities between the two leaders.

“As Netanyahu comes to DC to meet with Trump, the opportunity is clear and the moment is clear that these two men are really two sides of the same coin,” Miller told Middle East Eye. “As young Jews, we’re standing up to both reject the failed policies of the occupation and to prevent similar policies from taking place here at home.

“As Jewish Americans, we have an obligation to speak out here but also speak out against the leadership of our own, US Jewish institutions which for years have accommodated and really promoted the expansion of the occupation,” Miller said.

There have been no shortage of protests in DC in recent weeks, and some critics have said that, unlike civil rights marches of the past, these protests seem to be having little effect on the administration’s decision-making process. Szremski told MEE that despite this, they still have a purpose.

'As Jewish Americans, we have an obligation to speak out here but also speak out against the leadership of our own' - Ethan Miller

“Large protests might not sway the administration, but they’re garnering media attention, and Americans who may never have done a day of action in their lives are feeling empowered enough about injustice and democracy being under attack that they’re coming out and it’s our job to help them turn that into action,” Szremski said.

“When I first started doing this work, you never saw Palestine in the news, you didn’t see the word apartheid or occupation in the mainstream media, and now they’re writing about those issues, and some of it is because they see what’s happening on the street.”

It’s a sentiment echoed by Miller, who says the protests are just the beginning of a groundswell. “We know that large marches are great and important but what’s really going to make change are movements.” 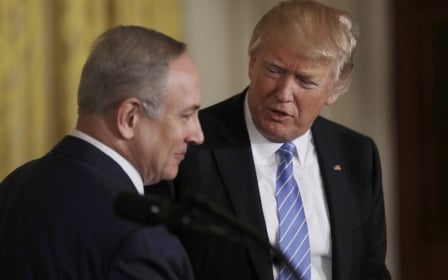