As Russia has started airtrikes in Syria, hundreds of Iranian soldiers preparing to join government forces in a major ground offensive have reportedly arrived in the country in the past 10 days, sources told Reuters on Thursday.

The ground offensive, according to the two Lebanese sources who talked to Reuters, will work in concert with the Russian bombardment and may be focused in the Idlib and Hama countryside.

"They are not advisors ... we mean hundreds with equipment and weapons. They will be followed by more," a second source told Reuters.

Iraqis will also take part in the joint operation, the source said.

News of the arrival of the Iranian soldiers comes a day after Russian warplanes began to strike Syria alongside government warplanes, drawing criticism from the US, Saudi Arabia and Turkey.

While Russia has explained its escalation of military aid to Syria in recent weeks as part of a strategy to battle the Islamic State (IS) militant group, rebel fighters, US officials and eyewitnesses told reporters on Wednesday that Russian strikes hit areas controlled by Syrian opposition fighters including al-Nusra Front.

On Thursday, the commander of the Liwa Suqour al-Jabal rebel group that has received CIA training reportedly said that one of the group's training camps in the Idlib province was hit by 20 missiles in continued Russian attacks.

Echoing the commander's comments, US Sen. John McCain, who chairs the Senate Armed Services Committee, told CNN that he had confirmed that Russian airstrikes were aimed at the CIA-backed fighters, not IS.

"Their initial strikes were against the individuals and the groups that have been funded and trained by our CIA, in a credible flaunting of any kind of cooperation or effort to conceal what Putin's priority is - and that is, of course, to prop up (Syrian President) Bashar Assad," McCain said.

The Free Syrian Army also said that one of its commanders, Iyad al-Deek, was killed on Wednesday by a Russian bomb dropped in Homs.

Speaking to reporters at the UN, Russia's Foreign Minister Sergei Lavrov denied reports that Russian jets had hit civilians and fighters who were not members of the Islamic State militant group.

"Talk began that civilians were hurt by airstrikes. We have no such data," Lavrov said. "We carefully make sure that these target strikes are precise."

Asked about the report, Lavrov said: "You state this as a fact. Do you know something that I don't?"

Lavrov declined to be drawn into questions about which specific groups were considered terrorists, but added that the US- and Turkish-backed Free Syrian Army was not among them.

Also on Thursday, Russian officials told the RIA Novosti state news agency that they would consider expanding their new military campaign into Iraq if Baghdad requested its assistance, a possibility the country's prime minister was reportedly considering. 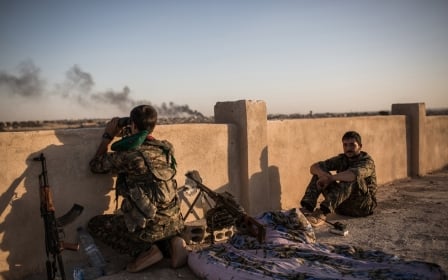