Donald Trump has announced that he will make all Syrian refugees leave the United States if he is elected president.

The Republican Party frontrunner said on Wednesday that he believed the Syrian refugees could be undercover members of the Islamic State (IS) group.

Trump set out his stall on Syria’s refugees on the same day Russia announced it was bombing the war-torn country, as part of Moscow’s policy to prop up the embattled government of President Bashar al-Assad.

“We’re not going to accept 200,000 people that may be IS. We have no idea who they are. And I’m telling you now, they may come in through the weakness of (President Barack) Obama,” but they will be returned home if Trump is president, he said.

More than 250,000 people have been killed since a 2011 pro-democracy uprising in Syria, which was brutally put down by President Assad, mutated into a savage multi-sided civil war.

Trump questioned why millions of people had fled their homes rather than stayed in Syria and fought.

The US has so far accepted 1,500 Syrian refugees in 2015. Secretary of State John Kerry recently announced Washington will raise the number of refugees allowed in by 15,000 over the next two years to make a total of 100,000 in 2017.

Trump currently heads the polls for who will be the Republican candidate in the 2016 presidential election, while on the Democrat side socialist candidate Bernie Sanders is the surprise frontrunner. 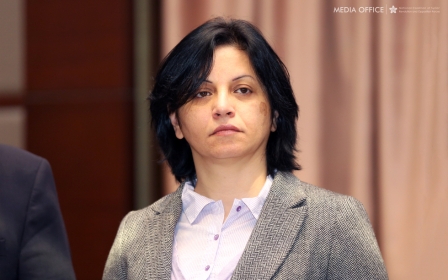 Syria War
Syrian National Council: ‘We have one condition - there is no future for Assad’