Hundreds pulled from sea as ship capsizes off Libyan coast

Latest arrivals bring number of people rescued and brought to Italy since start of the year to almost 40,000 About 600 people were pulled from the sea off the Libyan coast after an overcrowded boat capsized, the Italian navy said on Wednesday.

Seven bodies were recovered and the death toll may rise as the rescue operation continues.

The navy's Bettica patrol vessel spotted "a boat in precarious conditions off the coast of Libya with numerous migrants aboard," Italy's navy said in a statement.

"Shortly afterwards, the boat overturned due to overcrowding. The Bettica, which had arrived nearby, threw life-rafts and jackets" to people in the water, while another navy ship in the area sent a helicopter and rescue boats.

In a related development, Middle East Eye's Simona Sikimic in the Sicilian port of Palermo reported on Wednesday that 1,053 people, including 260 unaccompanied children, had arrived there aboard a rescue ship.

Ambulances were gathered at the port as pregnant women and others in wheelchairs were offloaded. Several people, alleged to have smuggled the passengers, were arrested at the scene and could face 10 years in jail.

The latest arrivals bring the number of people rescued and brought to Italy since the start of the year to almost 40,000, according to data released by the UN's refugee agency earlier this week.

Some 5,600 people were rescued from the Mediterranean on Monday and Tuesday, with at least 2,800 rescued by Libyan authorities and returned to the North African country, according to a report in Italian daily La Repubblica.

The surge of refugees comes as conditions on the Mediterranean have calmed after a spate of rough weather, and further landings are expected in the next 24 hours, MEE's correspondent said.

The nationalities of those rescued were not immediately available, although the overwhelming majority of those arriving in Italy so far this year have been from sub-Saharan Africa.

Officials say there is no sign yet of Middle Eastern refugees switching to the Libyan route to Europe, after moves to restrict access from Turkey via the Greek islands.

Earlier this month, a British parliamentary committee said the EU's naval mission to combat people-trafficking off Libya - Operation Sophia - was "failing" and had succeeded only in forcing people-smugglers to change tactics.

The operation, the committee said, "does not in any meaningful way deter the flow of migrants, disrupt the smugglers' networks or impede the business of people-smuggling on the central Mediterranean route".

The operation's destruction of wooden boats has also encouraged smugglers to use rubber dinghies, which has put migrants at great risk, the committee's report said. 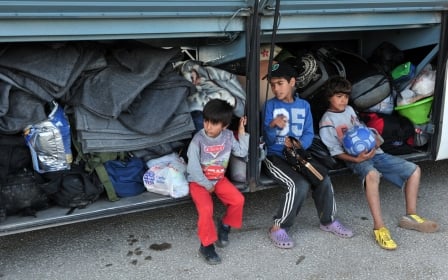