'I had bags stuffed with millions of dollars': How IS grew fat on oil sales

IS made millions a day after striking deals with Syria's government and contacts in Turkey and Iraq, according to former IS payroll clerk 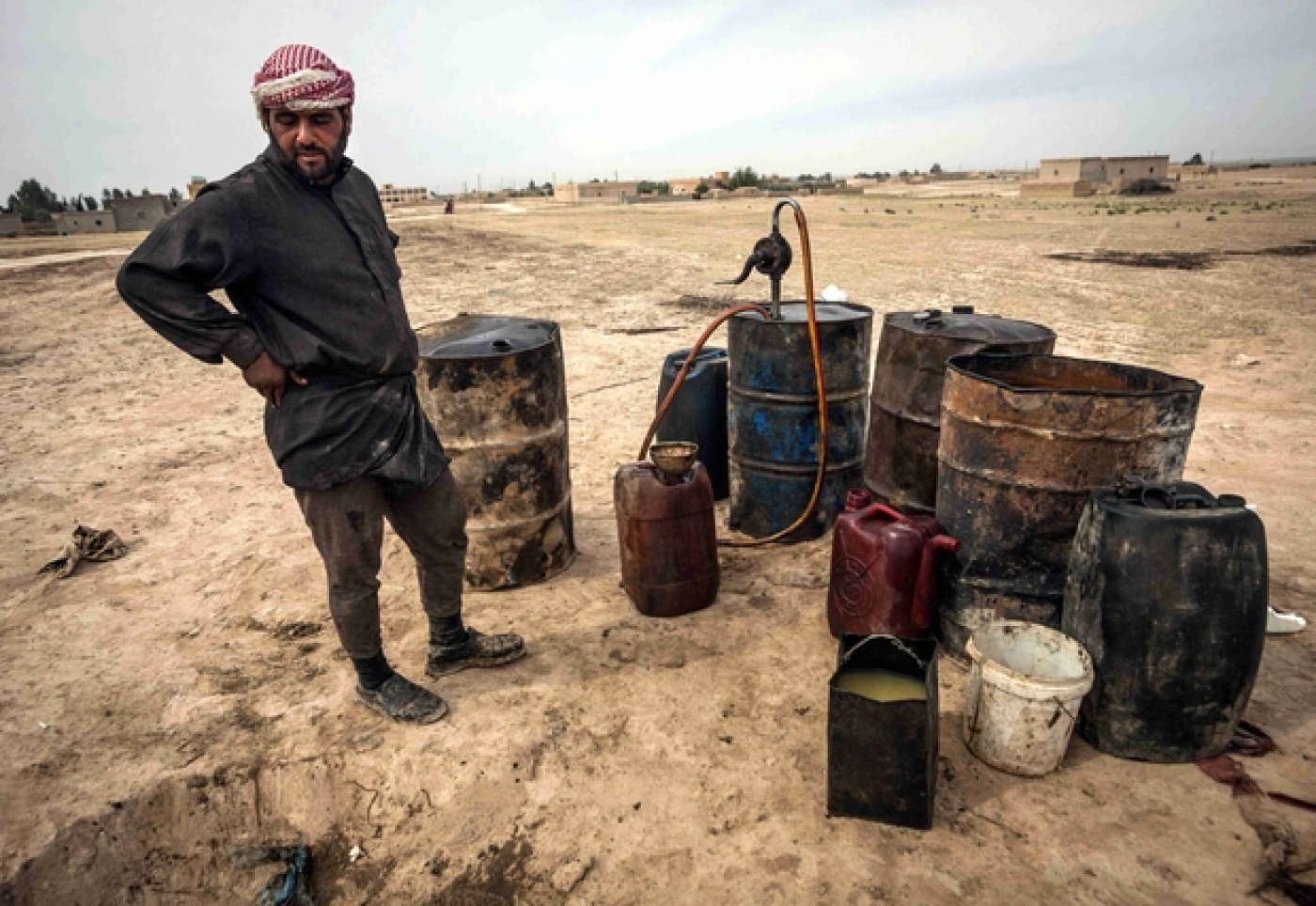 Many observers declared 2017 the year that the Islamic State (IS) group died its final death – with the loss of virtually all of its territory in both Syria and Iraq.

But little attention has been paid to the hundreds of thousands of militants and leaders of IS who are still believed to be roaming around the border zone between the countries, and hiding in the vast desert, the discreet caves and rugged mountains.

Others have returned to civilian life. And many carry stories of what took place in the time of the "caliphate".

Perhaps most infamous are the stories of secret deals between IS and other major players, including the Syrian government, which were first reported in 2014.

The extensive network of middlemen that IS established across neighbouring territories and countries helped their crude-for-cash deals. At times, according to reports, IS was making $3m a day from oil sales in Syria and Iraq.

Oil products became the backbone of their economy, according to numerous reports, enabling the caliphate to thrive for as long as it did.

But as IS began losing control of the oil fields it once wrested control of in Syria and Iraq, by last October, the group's oil revenues fell to $4m a month.

Rising through the ranks of IS

Abu Muhammed, 30, is originally from al-Mayadeen in eastern Syria.

He joined IS in early 2014, and soon gained the trust of one of the group's leaders. He was promoted to the position of a broker for many of these important trade deals.

And besides being a middleman for these lucrative sales, Abu Muhammed – not his real name – was assigned further duties as a payroll clerk.

"I used to get a bag full of US dollars each month, millions of dollars," Abu Muhammed says, speaking to MEE from the Syrian town of al-Bab, just south of the Turkish city of Gaziantep.

In early 2014, Syrian government air strikes on IS-held oil fields in eastern Syrian intensified, apparently as a strategy to press the group to either give up the oil fields or sell it to the government.

Subsequently, the IS leader responsible for the al-Omar oil field, Abu al-Khattab, decided to start backchannel negotiations with Syrian government officials to directly supply them oil, according to Abu Muhammed.

According to Abu Muhammed, who brokered several deals, the government's container would arrive at the al-Omar oil field, Syria's largest, with a driver who usually delivered the money.

The oil shipment would then be accompanied by IS militants until it reached Syrian government territories.

"Each container costs the regime one million Syrian pounds," he says.

While Abu Muhammed's claims cannot be independently verified, his identity and past membership of IS was confirmed by several of his friends and relatives.

The shipments deals continued for almost four years, until continued air strikes from the US-led coalition finally unseated IS in October 2017.

The same deal, according to Abu Muhammed, was applied to other customers, like Turkey.

"We used to sell oil to Turkey at the market price, and shipments would enter the Turkish border smoothly," Abu Muhammed says.

Although Turkey has denied the allegations of any involvement in oil purchases from IS, Abu Muhammed says it not only bought oil from the group, but turned a blind eye to IS selling oil to others and even facilitated IS oil exports.

'We never faced any problems from the Turkish gendarmerie... They actually always seemed fully cooperative with us'

"We never faced any problems from the Turkish gendarmerie," Abu Muhammed says.

"They actually always seemed fully cooperative with us," he adds.

Before he joined IS, Abu Muhammed was a computer science teacher, after studying IT at a college in Deir Ezzor, and graduating in 2008.

But his life took a sharp turn in in 2014, when he became an IS collaborator. 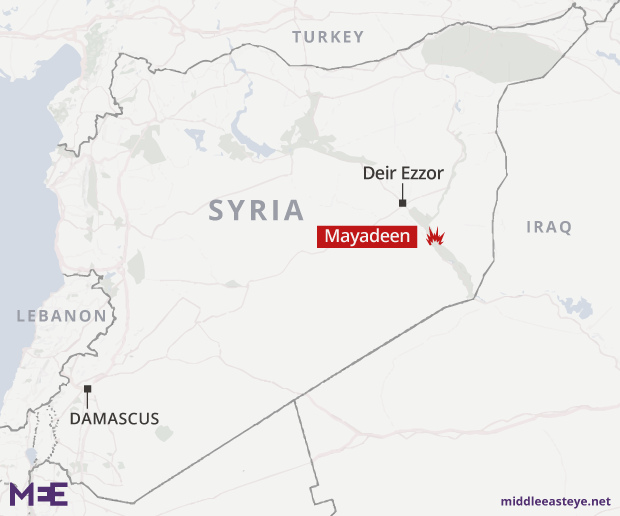 He insists that before joining IS it had never crossed his mind that he might one day become a bearded and armed man discussing violence.

And, he says, even after joining IS, that was not who he became, as, he insists, many IS fighters used to secretly smoke and drink alcohol.

"They had nothing to do ideologically with IS," he says. But since IS took over the cities and towns in eastern Syria in 2013 it became increasingly impossible for people to make a living without working for the group, or at least paying them dues.

"They are like a mafia with their rules of living," Abu Muhammed says.

"During both the US coalition and the Russian air raids, things got worse and worse in regard to oil drilling and selling to the Syrian regime and Turkey," says Abu Muhammed.

In late 2015, after Turkey shot down a Russian plane over its airspace, Russian President Vladimir Putin said Ankara had been motivated by a desire to protect its oil trade with IS.

And a Russian general also claimed that the Russian air force had destroyed around 500 tanks carrying oil from IS to outside buyers, Russian media reported in 2015.

But all along, the IS leadership had a plan B, according to Abu Muhammed, and had been long digging tunnels between Syria and Iraq.

And when the day came when they had to quit the oil fields in eastern Syria for good, these tunnels facilitated their movements, especially during periods of heavy aerial targeting.

In Abu Muhammed's eastern Syrian town of al-Mayadeen, which became the key IS stronghold in Syria after the group was pushed out of its Raqqa HQ in September 2017, the militants pulled back and disappeared into the desert after only a few days of battles.

A lot of fighters managed to live underground for a period of time, and others were able to either cross borders or hide in the surrounding desert, according to Abu Muhammed.

In June 2017, the Syrian government, backed by Russian forces, launched a major operation against the al-Omar oil field and the town of al-Mayadeen.

And besides heavy air raids, the US launched raids into the city, capturing two IS leaders, according to Abu Muhammed.

Abu Muhammed claims he saw an American helicopter land in the city, and capture the men. An Iraqi army colonel said in April 2017 that the operation had been launched from Iraqi territory.

An American official, speaking on condition of anonymity, told MEE that operations of that kind took place, without elaborating.

One of the leaders was Egyptian and the other was a Danish national, Abu Muhammed says.

It became very clear that IS was rapidly losing key ground in its last Syrian city, and the remaining circle became very narrow, especially for Abu Muhammed and some of his colleagues.

Realising that they were left in the city, and that all key leaders of the group had already fled, they too decided it was time to escape to safety.

Smuggled out of IS territory

As al-Mayadeen became uninhabitable, amid heavy aerial bombardment, Abu Muhammed and 15 other IS members moved north to make their way towards Turkey.

They struck a deal with a Kurdish smuggler, he says, each paying him 70,000 Syrian pounds - the equivalent of $136.

The smuggler kept them in a safe house for two days before he moved them on. Hiding in the back of the smuggler's truck, they went from one Syrian town to another, passing through various checkpoints safely.

"Whenever we were stopped at a checkpoint, the driver would have a side talk with the fighters and then miraculously they let us go," Abu Muhammed says.

The driver had managed to cross all the checkpoints until they reached al-Bab, where Abu Muhammed had been hiding for several weeks.

"This is how most of the IS leaders are fleeing Syria," Abu Muhammed says.

"An IS leader called Abu al-Atheer paid $35,000 last month to the 'al-Sharqiya brigades' (a Syrian rebel group affiliated with the Free Syrian Army) and they took care of him until he reached Turkey."

It appears clear that despite the end of the IS 'caliphate', the group, and its key leaders, have not simply disappeared, whatever many are quick to claim. 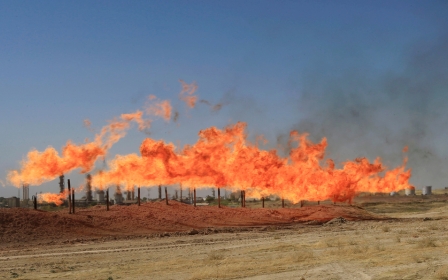