'It's not about somebody else. This election cycle is about us,' US congresswoman tells Muslim Americans If Muslim-Americans want to become "visible" and elevate their issues on the decision-making table, they must participate in the upcoming presidential elections.

That was Congresswoman Ilhan Omar's message to worshippers at the Muslim Community Organization in Des Moines, Iowa.

Omar visited the mosque after Friday prayers, three days before the Democratic presidential primaries kick off with the Iowa caucuses.

'When Bernie says us, we are included in that us'

The Muslim Community Organization is one of five mosques that will serve as caucus precincts in Iowa on Monday.

The Midwestern state has a sizeable Muslim minority population. It is also the home to one of the oldest mosques in the country.

Omar, who endorsed Bernie Sanders for president in October of last year, painted the senator from Vermont as a social justice warrior fighting for people on the margin of society as well as everyone else.

"When Bernie says us, we are included in that us," the congresswoman told the Muslim worshippers, alluding to the senator's campaign slogan, "Not me, us."

She said Sanders "seems so threatening to the status quo" because "Bernie sees everyone".

Omar urged worshippers to participate in the caucuses, stressing that Muslims and immigrants are major stakeholders in the outcome of the elections.

"You girls who don't feel comfortable showing up in their hijabs. This election cycle is about us. It's about our fathers who are working two jobs, three jobs, to put food on the table."

She added that the contest on Monday is also about parents who are worried about sending their children to another "endless war".

The congresswoman also gave a nod to Sanders' proposal for universal healthcare saying that the presidential race is about people with diabetes who are worried about how they can afford insulin.

"It's about young millennials. And what else was included in that list of 45 million people who are shackled with student debt and unable to access that American dream," Omar continued.

"So this election cycle isn't about you, it's about all of us... I am asking all of you to realise the importance of this election."

'We will make a difference'

Dressed in a fuchsia blazer over a black shirt with pink, round earrings dangling underneath her headdress, Omar's cameo at the basement of the mosque, where food was being served after Friday prayers, was as vivid as her outfit.

The attendees quickly gathered around her, approaching her to take selfies and shake her hand. The Iowa caucuses are hugely important. Here's how they work
Read More »

One of two Muslim congresswomen, Omar has reached celebrity status in the Muslim-American community despite allegations that she had made anti-semitic comments stemming from her criticism of Israel.

Omar's fellow Muslim in Congress, Rashida Tlaib, who is equally revered by many Muslims in the US, has also endorsed Sanders, and she is campaigning for him in Iowa this weekend as well.

Sanders received another boost from the Muslim-American community with the Muslim Caucus of America, an advocacy group and civic organisation, endorsing his campaign.

Arab and Muslim American advocates often cite Sanders' views on the Israeli-Palestinian conflict, his non-interventionist foreign policies and populist policies as reasons for supporting him.

On Friday, Ako Abdul-Samad, a Muslim Iowa state representative, also came out in support of Sanders.

"And plus, we need to show our values. We need to show that we are involved in the political process that at times tries to leave us out, and we cannot be kept out of that process because we have just as much to lose or to win as anyone else." US Politics
Trump impeachment: Here's what Arab and Muslim Americans say about it 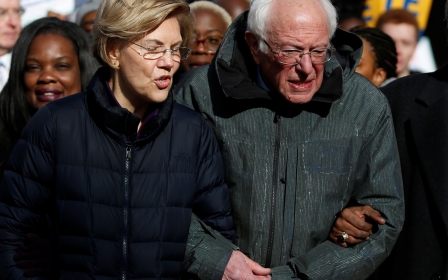