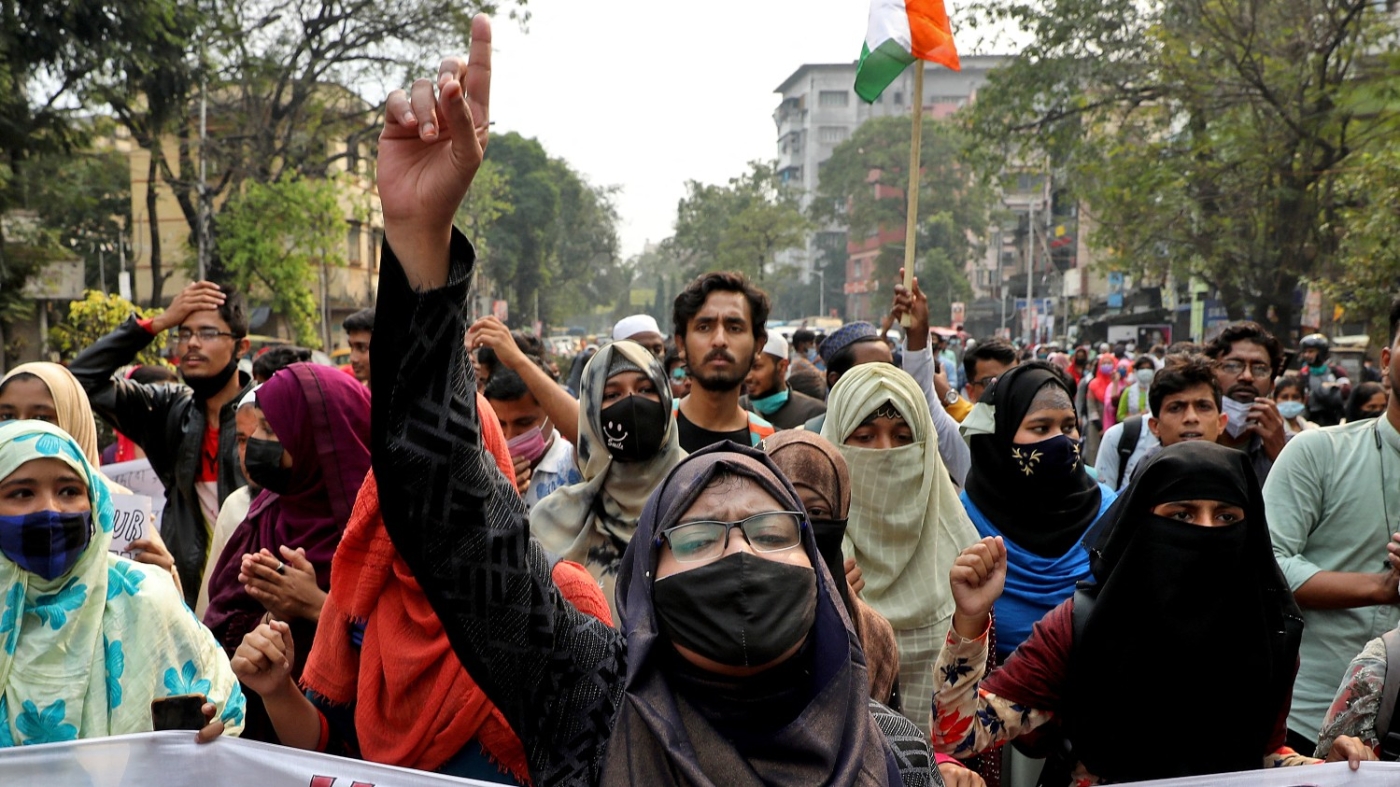 A ban on the hijab in schools in the southern Indian state of Karnataka, along with an escalation of religiously motivated attacks against Muslims in the country, has prompted widespread solidarity in the Middle East and beyond.

From Dutch-Palestinian supermodel Bella Hadid to Nobel Peace Prize laureate Malala Yousafzai, public figures and social media users worldwide have spoken out against the discrimination against Muslim women because of their choice of how to dress.

Young Hindu men and women have been seen brandishing saffron scarves to symbolise their opposition to the hijab.

On Wednesday, footage was widely shared of an Indian bank refusing to allow one of its veiled customers to withdraw money from her account.

The events in Karnataka have triggered a major row, one that has reverberated into the Arab world, sparking protests and social media activism against the ban.

In Kuwait, various protests have taken place over the last few weeks, with demonstrators standing outside the Indian embassy, carrying placards.

People in Kuwait held a protest in front of the Indian embassy against a ban on hijab in schools and colleges in Karnataka. They are holding placards with the photos of Muskan. pic.twitter.com/pQfacRbNNk

Kuwaitis also took their frustrations to social media, starting a campaign using #ExpeltheIndianambassador in both Arabic and English.

The campaign has proven impactful, with the hashtag rising among Kuwait’s trending topics on Twitter.

It's a public demand from us, the Kuwaiti people to expell the Indian ambassador from our country as a condemnation & refusal to the organised persecution practiced by the Indian regime against Muslims in India#भारतीय_राजदूत_को_खदेड़ना#طرد_السفير_الهندي@PMOIndia @AmbSibiGeorge

Others in Kuwait are calling for the boycott of Indian products.

YES , it’s the duty of all cooperative societies to boycott Indian products in reaction to what is happening to our Muslim brothers and sisters at the hands of the extremist Hindu party in India. #Expel_Indian_Ambassador #طرد_السفير_الهندي #Boycott_Hindu_Products #IndianMuslims pic.twitter.com/Dfm5Epw2pG

The issue has even received political attention in the country. Last week, a group of Kuwaiti parliamentarians demanded that the government put an immediate ban on the entry of any member of India's ruling BJP party into Kuwait.

In the letter, they wrote, “we can't sit back and watch Muslim girls being publicly persecuted”.

The Association of Muslim Scholars in Iraq has also condemned the hijab ban. In a statement, it denounced the Indian government’s discrimination against Indian Muslim women and restrictions on the hijab.

Protests have also taken place in Turkey where NGOs held a demonstration in Istanbul in front of the Indian consulate, denouncing the hijab ban.

“We don't approve of a ban on the clothes of members of any religion,” human rights activist and lawyer Gulden Sonmez said.

In Tel Aviv, women hosted a demonstration, with one protester sending a message to India’s Muslims saying, “We are all with you, the hijab is our right.”

In a tweet, Nobel Peace Prize laureate Malala Yousafzai wrote, “Refusing to let girls go to school in their hijabs is horrifying. Objectification of women persists - for wearing less or more. Indian leaders must stop the marginalisation of Muslim women.”

Meanwhile, Dutch-Palestinian supermodel Bella Hadid took to Instagram to call out various countries which have made headlines for their position against the hijab.

Writing in her caption to her almost 50 million followers, Hadid said “I urge France, India, Quebec, Belgium, and any other countries in the world who are discriminatory against Muslim women, to rethink what decisions you have made or are trying to make in the future about a body that is not yours.” 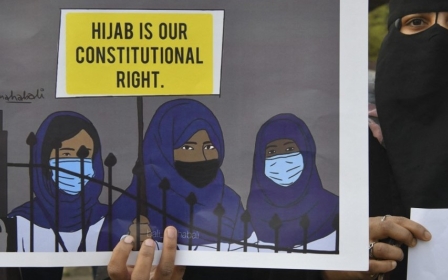