Inside Libya: The war for oil 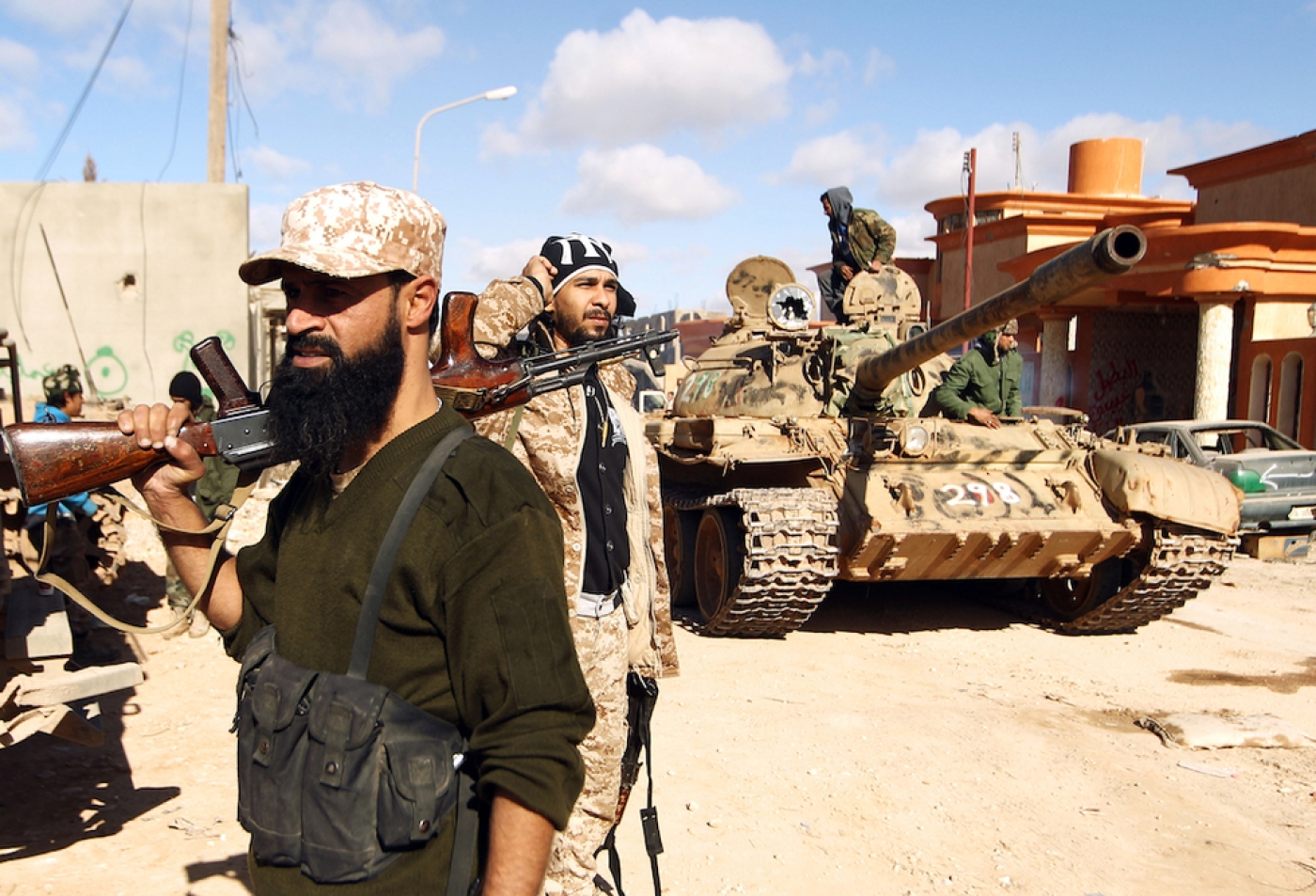 Members of the Libyan National Army hold a position during fighting against militants in Qanfudah, on the southern outskirts of Benghazi (AFP)
By
Maryline Dumas

AL-SIDRA/RA’S LANUF, Libya – “I wish you people had found water. Water makes men work. Oil makes men dream,” remarked King Idris of Libya when black gold was discovered in Libya in the 1950s. Today, the former ruler’s prophetic words seem to have come true. In al-Sidra, Libya's largest oil terminal, which is located between the sea and desert, lies a desolate landscape of enormous storage tanks destroyed by fighting in December 2014.

Though production since last fall has started up again, the employees of Waha Oil – owned by Libya’s National Oil Company (NOC) and in a joint venture with three US companies – are mainly busy with repairing the damage. On 3 March, their efforts were cut short after yet another dramatic turnaround in the Libyan oil crescent.

Ibrahim Jathran, a 30-year-old with close-cropped hair and tailor-made Italian suits, defends the idea of a federal system, a popular idea these days in the eastern region of Cyrenaica.

The race to control the oil-rich region, which contains 70 percent of the country’s reserves, has been on for some time. In summer 2013, Ibrahim Jathran was the first to enter.

As commander of central Libya’s Petroleum Facilities Guard (PFG), the government force protecting national oil facilities, he broke with the government and imposed blockades at oil facilities, which slowed production, and demanded the creation of a special commission to investigate the management of oil revenue under former ruler Muammar Gaddafi.

The 30-year-old, with close-cropped hair and tailor-made Italian suits, defended the idea of a federal system, a popular idea these days in the eastern region of Cyrenaica.

“We want a federal system for Libya, with Benghazi as its capital. Oil revenues should be allocated according to the law of 1958 [15 percent for the oil producing region, 15 percent for central government operations and 70 percent for development projects],” he was reported as saying in late 2013.

The outspoken Jathran is not to everyone’s liking in Libya, but he’s still in the race - and giving people food for thought.

Inhabitants and armed groups in other regions no longer think twice about shutting down pipelines that pass through their territories or blockading local refineries to demand jobs, wage increases and so on.

The government, with 90 percent of its budget derived from oil, has little leeway. In the summer of 2014, when political power was split between the Tobruk-based parliament in the east and the Tripoli-based General National Congress (GNC) in the west, the zone under Jathran’s control acted as a buffer area.

In December 2014, the Fajr Libya coalition of brigades, allied with the GNC in Tripoli, launched attacks on oil-crescent facilities. Dubbed operation “Libya Dawn,” their operation destroyed hundreds of thousands of barrels of oil, including seven of al-Sidra's 19 storage tanks, each worth $34m.

But fighting to the west of Tripoli in the township of Zintan, which backed the Tobruk parliament, along with inroads made by the Islamic State group in the region of Sirte, and in particular at Nofilia, 65km west of al-Sidra, would force the Fajr Libya fighters out of the oil crescent

In 2012, oil production was operating at 1.6m barrels per day (bpd). By 2016, production had dropped to 250,000 bpd. Production has increased since early this year, reaching 700,000 bpd in February – with Jathran, a member of the region’s powerful Magharba tribe, still firmly in place.

One of his brothers, Salem, was elected mayor of Ajdabiya, the largest city in the region, while another brother, Osama, headed a local militia suspected of having ties to Ansar al-Sharia.

In July 2016, Jathran had formed an alliance with the UN-backed GNA and made a deal with the head of the UN support mission in Libya, Martin Kobler. Jathran was particularly proud of having rolled out the red carpet for the German emissary in Ra’s Lanuf, 30km east of al-Sidra, the region’s main oil refining complex.

His dealings set a lot of Libyans on edge, in both the east and west. For them, Jathran’s efforts were tantamount to stealing their national resources. Mustapha Sanallah, president of the NOC, wrote to Martin Kobler expressing his doubts: “The individual you are officially negotiating with has done more harm to our country than any other.”

Sanallah estimated losses caused by Jathran’s blockades at more than $100bn. In any event, Jathran went on to announce the reopening of al-Sitra's production sites – but he wouldn’t have time.

On 11 September 2016, joint forces from the Libyan National Army (LNA), a coalition of soldiers from the former government, and the revolutionary brigades under the command of General Khalifa Haftar made a clean sweep through the country’s oil crescent.

“We had been negotiating with the region’s tribal leaders for months,” General Mohamed Hamouda, NLA commander for region, told Middle East Eye during an interview at the Ra’s Lanuf complex in February 2017.

“According to our agreement, the tribal elders were to convince the Petroleum Facilities Guards [PFG] to lay down their weapons and return home. This is exactly how it happened. We gained control of the oil facilities with hardly any fighting,” he said.

Libya’s economic livelihood was in the hands of the GNA. By mid-September 2016, the interim government in Bayda (established by the Tobruk parliament but not recognised by the international community), with the help of its military arm, had taken control of 70 percent of the country’s oil reserves.

But in truth, only the management had changed. “The agreement specified that once the facilities were completely under our control, the guards, who had been cooperative, would be able to return to work. It is how they make a living,” Hamouda said. In short, Jathran’s guards had simply become LNA guards.

Perhaps this explains the LNA’s weak defence on 3 March, when two of the region’s key oil export terminals, R’as Lanuf and al-Sidra, were won by forces of the Benghazi Defence Brigades (BDB), a coalition formed in 2016 to oust Haftar.

These forces have close ties to the Prime Minister Khalifa al-Ghweil, appointed by Fajr Libya in 2015, as well as the Tripoli Grand Mufti, Sadiq al-Ghariani and - more disturbingly for the international community - the GNA defence minister, al-Mahdi al-Barghathi. But their interests do not really lie in the oil facilities – their main objective is Benghazi, the country’s second-largest city, about to be lost to Haftar’s forces. So they basically handed over al-Sidra and Ra’s Lanuf to the GNA.

On 7 March, Jathran placed the facilities under the control of Idris Bukhamade, a close political ally who is currently in command of the PFG. Prime Minister Fayez al-Sarraj has denied having any connection with the attack, though the UN-backed government clearly has much to gain from recovering control of the country’s economic lifeblood.

Production at three of the six oil fields has once again stopped, but the problem at present is how the fighting will affect Libya’s economy, which had been given some oxygen in September when production at the oil facilities were back online.

In February this year, during a visit to al-Sidra, MEE reported on the efforts underway to increase production and export.

'Four of the reservoirs can be repaired. Two will be put back to work within the next two months'

Waha Oil employees were repairing storage tanks damaged by fire. While one group of workers worked on the replacement of a valve blocked by oil, which had hardened after months of inactivity, another man gave the tank a coat of white paint. Workers on another tank were removing a metal staircase threatening to collapse.

Ibrahim Malhouf is the manager of the complex. “Four of the reservoirs can be repaired. Two will be put back to work within the next two months. We should be able to increase production from 80,000 barrels per day to 100,000 barrels [compared to 450,000 barrels in 2010]” he told MEE, raising his voice over the clamour of construction and the gusts of wind. 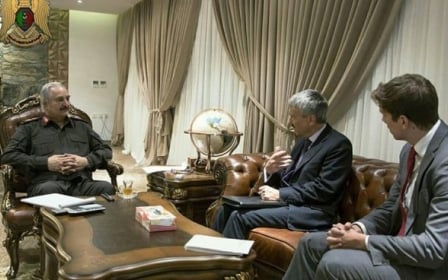 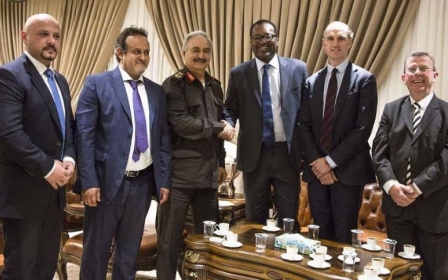