Inside Mosul: Where the dead are swept away as looters scour the ruins

Ten months after the defeat of IS, and the city still disgorges its dead. But no one is counting, and workers are allegedly more concerned with loot A skull lies in the ruins of Mosul's Old City. Bodies are still being found 10 months after its capture (AFP)
By
Francesca Mannocchi

MOSUL, Iraq - The trucks arrive empty in the ruins of the Old City, and always leave full. Some are laden with debris from the thousands of destroyed buildings, but others carry a more macabre payload - piled in the back, neatly wrapped in polythene, are the remains of people still being dug from the ruins.

Mosul continues to give up its dead even today, 10 months after Islamic State was defeated. In the Old City and surrounding areas, all but flattened by intensive US coalition bombing and Iraqi artillery, diggers work in shifts to move the estimated 10 million tonnes of debris, raising clouds of dust and fragments of bodies before the recovery teams move in.

We cannot give the official numbers of the bodies we have recovered. The government told us to stop

The bodies of IS fighters are often disgorged from the ruins still wearing explosive belts, but among them are the innocent - tiny feet and hands are a common sight and, after one dig, a child's flower-shaped hair clasp is seen still attached to a skull.

Such was the destruction in Mosul that this grim work will continue for months to come - in recent weeks, according to media reports, civil defence teams recovered hundreds of bodies "of fighters and their families".

But the report does not explain how a body is determined to be an IS family member, rather than just a civilian caught in the crossfire. It simply groups all together as the enemy.

And, according to workers who spoke to Middle East Eye, many of the corpses are given no further examination and are now simply dumped in mass graves outside the city.

Mohammed, a 28-year-old working on the recovery of bodies, told MEE he expected there were another 9,000 bodies under the rubble - but that no one will ever know the true figure.

"We cannot give the official numbers of the bodies we have recovered," he says.

"The government asked us to keep count up until a few months ago. Then they told us to stop, and transfer the bodies directly to mass graves outside the city."

Among all of this come claims of widespread looting by the Iraqi military, police and intelligence services. Such activity would be nothing new: in 2017, Human Rights Watch reported homes being stripped of possessions and then burned as Iraqi forces closed in on the city.

If bodies go unidentified, what happens to their property?

A local police officer, who could not give his name for fear of reprisals, claimed the looting was systematic.

“When they open the houses in the Old City area, they know they will find money, gold, and lots of weapons," he says. "This is the reason why they do not want too many journalists around."

"Some of them have an agreement with the intelligence - they share the loot. They enter the houses of top leaders and if they find money and gold, they share things with each other.

"Even the weapons. Some are delivered and others sold on the black market."

The police officer said that the recording of property has gone the same way as the identification of the dead.

"I had the task to list the things they found, if there was money and how much, what kind of weapons, if there was gold or other valuable goods," he said.

"I should have handed that list to the army and institutions. I tried several times. They did not allow me to get close.

The recovery of the corpses is an excuse. No one really cares how many people died, what matters is finding treasure

"I reported what I saw, and the obstacles, but they asked the local police office to move me and I changed my role. Now I work from the office, so they can loot undisturbed."

"Ten days ago, my men told me that in a house in the Old City there were money boxes. That money was shared between members of the civil defence and members of intelligence.

"The amount has never been reported to the institutions. Exactly like the real numbers of bodies."

While Middle East Eye cannot independently verify his claims - any attempt to do so with senior commanders would have led to expulsion - it was witness to several hours of digging at what was believed to be the home of a senior IS commander.

As soon as entry was gained, MEE was told to leave.

After hours of waiting, a civil defence officer asks: "Aren't you bored here? Why don't you go away? Go away."

The local police officer was adamant the exchange was due to what lay inside.

"It was the house of one of the leaders," he says.

"They know where to search, they have the map of the houses of the IS commanders and assume that there is treasure in those houses.

"The recovery of the corpses is an excuse. No one really cares how many people died in Mosul, what matters is finding the treasure of Islamic State."

'People are the security of the city'

In a building that was once Saddam Hussein's residence in east Mosul sits General Najm al-Jabouri, the head of security forces in Nineveh province and a veteran of Saddam's army.

The 62-year-old considers the task facing his men in Mosul. "The main problem today is reconstruction," he says. "We have completed two big steps: clear the city of IS and maintain security.

"Now we have a third - rebuild the houses, the schools, the shops and the infrastructure.

When that is achieved, the city can return to something approximating normality.

"The security of a city like Mosul is not just in the hands of the army," says Jabouri. "People are the security of the city. If you win people, you win the war.

"Now people are with us, and the relationship with the security forces is good, but we need to encourage people.”

But in the streets of the Old City and beyond, distrust and fear lingers - and for good reason.

Residents wait patiently for the diggers to move enough debris to get into their own homes and recover anything left intact.

Under Iraqi law, residents must recover the bodies of dead relatives to receive an official death certificate from the government, and accompanying papers proving they are not IS.

They want to steal our things, and they usually do

Those without become trapped in bureaucracy, meaning survivors will be denied food aid until they can prove they were not associated with the group.

"There is someone who comes to steal the dead," says one old man. "Without a body in the morgue you cannot have a death certificate, and without that you're stuck.

"Without documents you do not have the stamp from the intelligence and you do not receive food. So people come to steal the dead to get the stamps, because they need food aid."

Another local resident picks through the remnants of their former home, looking for anything that has not already been taken.

"They want to steal our things, and they usually do," they say. 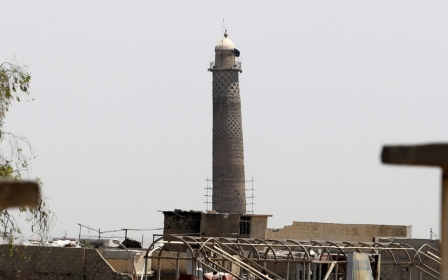 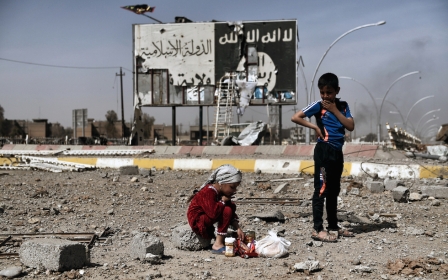