The inside story of Labour Party's anti-Semitism saga 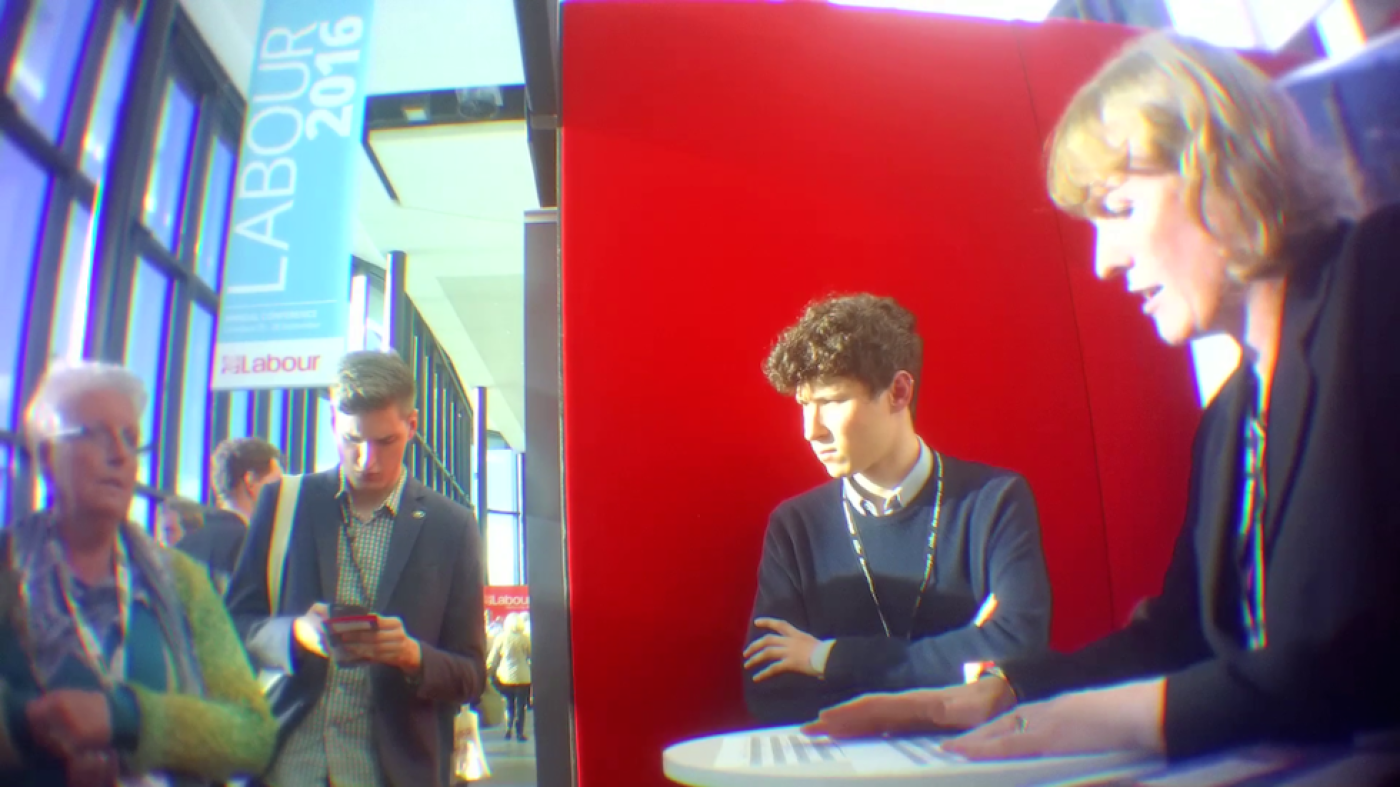 A political activist who was accused of anti-Semitism at the Labour Party conference in September by a pro-Israel MP has been exonerated in undercover footage seen by Middle East Eye.

Video footage secretly filmed at the conference in Liverpool in September 2016 shows a woman engaged in a heated discussion at the Labour Friends of Israel (LFI) stall with Joan Ryan, the MP for Enfield North, about the two-state solution.

Later, Ryan discussed the exchange with other members of the group. Details subsequently appeared in media outlets and the woman – who only wishes to be known as “Jean” – was the subject of a Labour Party investigation, which eventually cleared her.

“I am very worried, I'm very hurt, I feel very anxious that she has taken my words, to making it into something entirely different, and that she should be misinterpreting me totally to other people. I find that very, very worrying.”

Jean told Al-Jazeera - which filmed the incident as part of its investigation into the Israeli lobby in the UK  - that she was appalled at being accused of anti-Semitism.

“I am very shocked about the way she described my words to other people," she said.

“I am very worried, I'm very hurt, I feel very anxious that she has taken my words, to making it into something entirely different, and that she should be misinterpreting me totally to other people. I find that very, very worrying.”

The footage surfaced as part of a journalistic sting by Al-Jazeera into the activities of Israeli lobbyists in the UK.

The network also filmed Michael Rubin, LFI Parliamentary Officer, discussing working “really closely together” with the Israeli embassy “behind the scenes.” He was previously involved in interviewing Labour student supporters about allegations of anti-Semitism in the Oxford Students Union.

An undercover reporter attended the 2016 Labour Party conference, which saw the re-election of leader Jeremy Corbyn, who is sympathetic to the Boycott, Divestment and Sanctions (BDS) movement against Israel and who has been criticized for apparent reference to Hamas and Hezbollah as “friends” in a 2009 meeting.

Corbyn’s team launched an inquiry into the depth of anti-Semitism within the Labour party in 2016 - and came up with new guidelines on the limits of what would be tolerated, including discussion of the Israel-Palestine conflict.

Among the incidents presented in the footage is a confrontation between "Jean”  and Joan Ryan MP, the chair of Labour Friends of Israel (LFI). The LFI is a pressure group within Labour: it was originally established in 1957 and has for decades lobbied for stronger bilateral ties between the UK and Israel, as well as building links with the Israeli Labour party.

In the video, which contains the full conversation, Jean approaches the LFI stall to ask Ryan if her group is “very anti the settlements”, referring to the illegal settlements constructed by Israel in the West Bank.

Jean: “What is Labour Friends of Israel doing about that?”

Joan Ryan: “We make our view clear and we meet with people at all levels in Israeli politics and diplomatic circles etcetera. And we make it absolutely clear we’re not friends of Israel and enemies of Palestine. Hence our new campaign launching next month and that we’re showcasing here.

Jean then repeatedly asks Ryan about “Israeli occupation” and what steps can bring about the "two-state solution".

Joan Ryan: “I think we have to be very, very careful not to let our feelings about this morph into anti- Zionism.”

Jean: “So no feelings come into account? No, I’m not being anti-Zionist. Don’t we all want a two-state solution based on coexistence and peace?”

The conversation then becomes more heated as Jean repeatedly inquires what LFI is doing to support the move towards a two-state solution.

Joan Ryan: “I don’t know where you get that from… ‘Labour Friends of Israel have got a lot of power, a lot of money’... that’s just not …

Jean: “Well, I think so, that’s what I hear that, you know, it’s the stepping-stone to good jobs. A friend of mine’s son’s got a really good job at Oxford University on the basis of having worked for Labour Friends of Israel... it’s not a rumour, it’s a fact.”

Joan Ryan: “It’s anti-Semitic. It is. It’s a trope. It’s about conspiracy theorists.”

Joan Ryan: “Sorry, it is. Anyway, that’s my view and I think we’ll have to agree to differ.”

Joan Ryan: “Well, I’m agreeing to differ and I am ending the conversation because I am not really wanting to engage in a conversation that talks about get involved with this and then you get a good job in Oxford or the City or... and that is anti-Semitic, I’m sorry.”

In the undercover footage seen by Middle East Eye, Ryan attends a meeting of LFI after the earlier incident with Jean, saying there had been “three incidents of anti-Semitic harassment” at the LFI stand that day.

Footage captured the next day sees Ryan discuss the conversation - and other alleged incidents - at the LFI stall with leading Labour MP Angela Eagle and Michael Rubin, LFI Parliamentary Officer.

Speaking at the conference, Rubin refers to the previous day’s incidents, adding that “today’s been better where we did have one person towards the end of the day come and say the anti-Semitism was just being used to crush Jeremy and that the allegations are made-up to certain extent.”

He says that such comments are “obviously awful but compared to the stuff yesterday it’s sort of not as bad” and that he is “less shocked about that than I was about what happened yesterday.”

Ryan says she made a “formal complaint” against Jean, who by this point had circulated a video of the incident.  Ryan points out the video “didn’t show any of the bits where I said ‘you’re being anti-Semitic.’”

She adds: “Well I mean, I wrote down honestly what she was saying about him being rich and powerful, he went to Oxford and the next minute he’s got a big job in banking, you know,” she explains – even though in the conversation Jean did not refer to banking.

Ryan adds: “And I said... classic anti-Semitic tropes aren’t they.”

The group discuss other incidents, including one woman who claims never to have seen anti-Semitism in the party and believes the  claims are being used to “undermine” Corbyn; and another person who remarks that the “coup” launched by Labour rebels to unseat Corbyn in 2016 had been “launched by Jews and Jewish MPs and Jewish millionaires and Angela Eagle’s husband is Jewish.”

Alex Richardson, Ryan’s assistant, says to Ryan that if the incident makes her feel uncomfortable then she should report it. He says that he reported an incident the previous day because he felt uncomfortable.

He adds: “And although nothing anti-Semitic was said, I’m sure there were undertones of it and it was brought up on that context.”

After the conference, Jean was contacted by a Labour party official who, she says, would only say it was about a serious incident.

Al-Jazeera’s undercover reporter was also contacted by Ryan’s assistant, asking him to be a witness to an alleged act of anti-Semitism.

“At no point did I ever say that Labour Friends of Israel will get people jobs in banking in the City,” she said. “I did say, which is absolutely true, that I know the son of a friend of mine who, he believed himself that having some connection with Labour I Friends of Israel didn't harm his career at all.

Ryan was contacted for comment, but at the time of publication MEE has received no response.

Israeli historian and activist Ilan Pappe, who saw the footage, told Al-Jazeera that it “clearly” showed that Jean was “not anti-Semitic. They know it,” he said “She didn't talk like an anti-Semitic person. She was a typical pro-Palestinian person who was worried about the violations of human, of the Palestinian human and civil rights.”

“The activist who came to ask [Joan Ryan] tough questions about settlement activity, that was her main point. She didn't ask her about Judaism or the existence of Israel, she just wanted a straight answer for how does anyone who supports Israel explain the settlements, or justify the settlements.”

The Labour Party has faced claims of anti-Semitism during the past 12 months.

Video captured at the Labour party conference shows Israeli ambassador Mark Regev speaking to a group of activists at an event about the risks facing pro-Israel sympathisers in the party.

Also present is the Israeli embassy political officer Shai Masot, who was caught on camera discussing ways to “take down” UK deputy foreign minister with a former employee of the Department of Education.

“Some of the people here are more Palestinian than the Palestinians,” says Regev. “The fashion if you are on the left today you are probably very hostile to Israel, if not anti-Semitic.”

In April 2016 a Facebook post by the Bradford West MP Naz Shah appeared to suggest Israel could be relocated to the US.

Although the image had originated as a satire from the Jewish professor and activist Norman Finkelstein - and had originally been posted by Shah in 2014 - the ensuing controversy led some to suggest that Corbyn was tolerant of anti-Semitic attitudes within the party.

Shah apologised and her suspension was lifted - but numerous members were suspended amid fresh reports of anti-Semitic attitudes, including Jewish anti-Zionist activist Tony Greenstein.

“I have no idea what the comments I am alleged to have made which caused the LP McCarthyists such upset,” he wrote on his blog at the time.“Perhaps I mentioned socialism too often. Or in the current atmosphere of attempting to paint the Left as anti-Semitic, perhaps they thought that expelling someone who has fought fascism all his life would be an example to all.”

Former Mayor of London Ken Livingstone was also suspended from the party following comments in which he appeared to suggest that Adolf Hitler had been a supporter of Zionism.