Ahmed Abu Artema, a journalist and political activist, told MEE that Palestinians want freedom just like any people under occupation 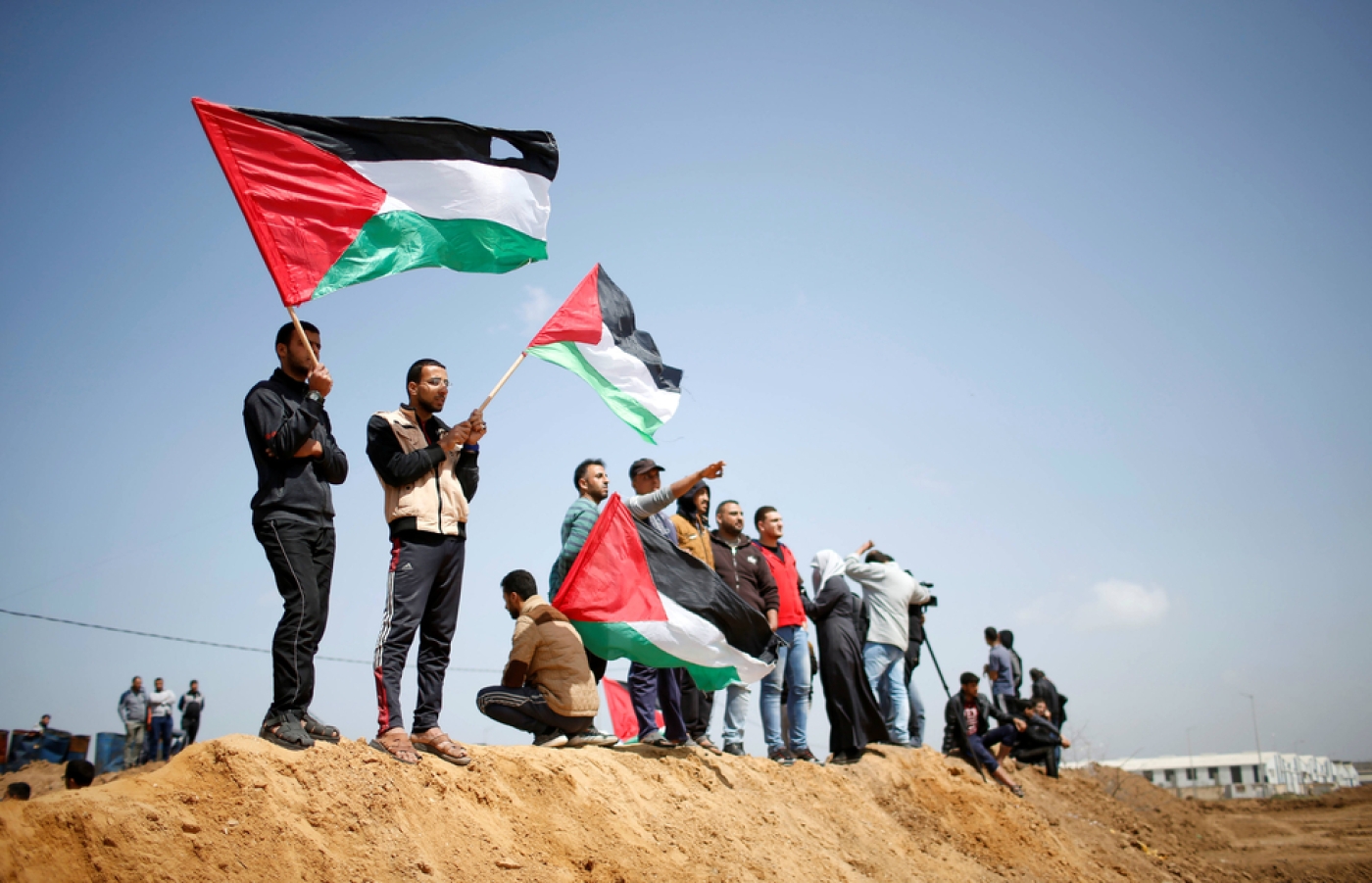 It is the 11th consecutive Friday of protests by Palestinians in the Gaza Strip in the Great March of Return, which started on 30 March, Land Day.

The latest protest has been called the "One-Million March for Jerusalem" to mark the Arab-Israeli war of 1967 and to call again for the right of return for refugees.

It is also Al-Quds Day, an annual event that takes place on the final Friday of the Islamic holy month of Ramadan to campaign for the rights of Palestinians.

Middle East Eye spoke to Ahmed Abu Artema, a 34-year-old journalist and political activist who sparked the Great March of Return with a Facebook post he wrote in January.

"I wondered what would happen if 200,000 protesters gathered near the Israel fence with Gaza Strip, and entered the lands that are ours," Abu Artema said.

His post sparked a public debate in which thousands of people have discussed the practicality of returning to their family homes and villages from which they were forced in 1948.

In a video, Abu Artema argues that the right of return can be achieved, pointing out that just two percent of the Israeli population are living on the lands of Palestinian villages controlled by Israel in 1948.

"I and my family are refugees from a village in the city of Ramle," Abu Artema said.

He is not an enthusiast of armed struggle, and thinks Gandhi's pacifism and resistance to British rule in India is a model to follow.

He thinks the idea of the one-state solution will grow and gain momentum, internationally and among Palestinians, but that the main obstacle will be, according to Abu Artema, "the ideological Zionist refusal in the Israeli society... [that] has deep roots in the Israeli psyche".

Middle East Eye: What was the origin of the concept of the Great March of Return?

Ahmed Abu Artema: The march started with a Facebook post I wrote on 7 January in which I wondered what would happen if 200,000 protesters gathered near the Israel fence with the Gaza Strip, and entered the lands that are ours, which were occupied by Israel in 1948, carrying the Palestinian flags and the keys of their houses in Mandatory Palestine.

I ended the post with the hashtag #GreatMarchofReturn. People engaged with the post, and after two weeks everyone was talking about it.

AAA: I think a set of conditions served the timing of the March of Return.

First of all, the intensifying of Israel's siege over Gaza and the slow death imposed on Gaza's Palestinians: the devastating medical and economic situation in Gaza and the closing of borders, no salaries, no jobs and no hope and light at the end of the tunnel. All these elements helped.

But most important of all was Trump announcing Jerusalem as the capital of Israel.

Also, the leaks about ending the UNRWA and the right of return for refugees. All of this caused fear, anxiety and intimidated Palestinians. It pushed them to engage.

The March of Return concept is not a traditional way of protesting. It is not an armed struggle or a silent and passive calmness which led to more sanctions by Israel and the Palestinian Authority in Ramallah. The concept was that we could protest and demonstrate without going to war.

'Palestinians in Gaza are living people, generous, and believe in their rights and cause'

MEE: Why do Palestinians still protest at the fence despite the risk of being killed by Israeli snipers?

AAA: Palestinians in the Gaza Strip are living people, generous, and who believe in their rights and cause. Despite more than 120 people being killed by Israeli troops and thousands injured, people are still protesting for the 11th consecutive Friday since the Land Day on 30 March. We are people fighting for our freedom, dignity and justice.

MEE: Who are the organisers of the march?

AAA: It is a collective effort by young people, civil society organisations, political parties and factions. It is a choice for Palestinian national and social unity.

MEE: What do you want to achieve?

AAA: We want our voice and message to reach the world. We refuse to accept the injustice imposed upon us. We reject the big prison made by Israel that we live in. The March of Return is a step in our struggle to gain freedom. Palestinians have a national cause. All people struggled and fought to gain freedom. People and nations under occupation and totalitarianism have no choice but to keep struggling.

MEE: But the right of return, guaranteed by UN resolution 194, is not accepted by Israel?

AAA: We do not care about Israel's refusal. Israel is a colonial project that has been committing war crimes for 70 years. We are focused on continuing our national struggle and on obtaining the international solidarity and support to boycott Israel. The right of return is guaranteed by international law, and it is being violated by Israel.

MEE: Do you think Palestinian refugees in Jordan, Syria and Lebanon will follow suit?

AAA: We are not satisfied with the silence of Palestinian refugees in Lebanon, Syria and Jordan. But we expect that a movement of return will be created, and Gaza would be used as an example for Palestinians, not only in these countries but around the world, to return to Palestine.

MEE: Israeli and Western media say Hamas is leading the march. What is your response?

AAA: The March of Return is a choice by all Palestinian people, including all the factions and civil society institutions. Of course, there are Israeli attempts to defame and slander the march by blaming Hamas and distracting people from the original goals of this march: the right of Palestinians to return to their lands and homes in Palestine.

These lands and homes are located inside what is now called Israel. I explained this in a video. Israel and the Western media are trying to distract people from focusing on the Israeli siege, occupation and injustice.

MEE: From where were your family expelled? What does the right of return mean to you?

AAA: My family and I are refugees from a village in the city of Ramle, to the southwest of Tel Aviv. My grandfather was forcibly expelled by Israel in 1948.

The right of return, for me, means to live freely like everybody else in the world, to not live in this Israeli-made prison of Gaza.

It means the victory of humanitarian justice. To be able to visit Ramle, and live in my grandfather's village peacefully and to be able to travel in my country peacefully. This is what it means.

MEE: You said once that you do not believe in armed struggle but in ending the Israeli apartheid and living along with Israelis?

'My grandfather was forcibly expelled by Israel in 1948'

AAA: Yes, I believe in the Gandhian side of the Palestinian cause which I believe is more effective than armed struggle.

MEE: Do you think a one-state solution is achievable?

AAA:  A one-state solution, where all citizens are equal under one law, is a powerful and strong idea which I think it would grow in the future and gain momentum.

So far, the main obstacle to achieving the one-state solution is ideological Zionism in Israeli society. This has deep roots in the Israeli psyche.

There is no collective consensus and clear position about the one-state solution on the Palestinian side, but I think this may change.