Iran clerical body: US remains our 'number one enemy' The Assembly of Experts is among Iran's most influential institutions, comprising 86 clerics who appoint and can dismiss the country's supreme leader.

It is led by the ultraconservative Ayatollah Mohammad Yazdi.

The nuclear agreement should not "change our foreign policy" of opposition to America, "our number one enemy, whose crimes are uncountable," Yazdi said in a speech opening the annual two-day assembly meeting.

"The US and Israel are the source of the situation in the region and (their) goal is to protect the Zionist regime in the Middle East," he was quoted as saying, blaming the two countries for the conflicts in Syria, Iraq and Yemen.

Echoing Yazdi's remarks, the leader of the Islamic republic's top military force, the Revolutionary Guards, said the US would always be "the Great Satan".

"Do not be fooled by the new American language," General Mohammad Ali Jafari told reporters.

"The hostility of the United States towards the Iranian people has not diminished, but actually increased... they use other methods," he added, according to the Guards website Sepah News.

Iran's President Hassan Rouhani, who as a cleric is also a member of the Assembly of Experts, was elected in 2013 and has since reached out to the West for better relations.

Several high-level European delegations have visited Tehran since the deal.

But despite the nuclear talks and the intricate role US Secretary of State John Kerry played in getting the deal across the line, there is currently little prospect of normalisation between Iran and the United States.

The two severed ties in 1980 after the hostage taking of US diplomats by students.

Meanwhile, Iran's judiciary chief has urged the United States not to interfere in cases of detained Americans, days after Kerry said a jailed marine should be freed.

Hekmati was visiting relatives in the Islamic republic when he was arrested.

Larijani, quoted in Iranian media on Tuesday, said Iran examined legal cases "including those accused of spying for America, with absolute composure and dignity, based on duty and procedure.

"The judiciary does not need American officials to write prescriptions for it," Larijani said. "Our advice to them is not to hype (such matters) up uselessly."

In his remarks on Friday, Kerry called Hekmati's detention "unjust" and also renewed his call for Iran to release two other Americans.

Pastor Saeed Abedini was arrested in Iran in 2012 and sentenced to eight years in jail for gathering a group of people to study the Bible.

Washington Post reporter Jason Rezaian, meanwhile, has gone on trial on spying charges and after more than a year in custody is awaiting sentencing.

Larijani said the judiciary would perform its duties, while interests of national security also provided for Iran's Supreme National Security Council to have a say under the law.

In some cases, the country's supreme leader is authorised to issue a pardon, the judiciary chief added.

Iran hopes 'propaganda' will not sway US Congress

Meanwhile, Iranian Foreign Minister Mohammad Javad Zarif said Tuesday he hoped the US Congress would not be swayed by "warmongers' propaganda" over the nuclear deal struck between Tehran and world powers.

"What happens in the US Congress, that's certainly a US issue," he told a news conference in Tunisia.

"We believe it's a mutually beneficial agreement," Zarif said of the nuclear accord.

"And if people are not too much concerned with the propaganda being raged by warmongers in our region and outside our region, there's no reason for the deal to face any impediments in the United States," said the minister who negotiated the deal.

Congress is due to vote this month on whether to endorse the agreement between Iran and six world powers - Britain, China, France, Germany, Russia and the United States.

Republicans strongly oppose the deal, saying it makes too many concessions to the Islamic republic and does so at the expense of the security of America and its chief ally Israel.

If the Republican-dominated Congress passes a resolution against the deal, President Barack Obama is expected to veto that move.

On the battle against the Islamic State (IS) group, in which Tehran and Washington find themselves on the same side, Zarif called for a "multi-faceted" campaign.

"We believe … that the fight against ISIL is not simply a military operation," he said, using another name for IS.

"It has to be a multi-faceted cultural, religious, political, economic and if necessary military campaign against this threat," he said.

"We need to uproot the sources and the main reasons that give rise to this phenomenon." 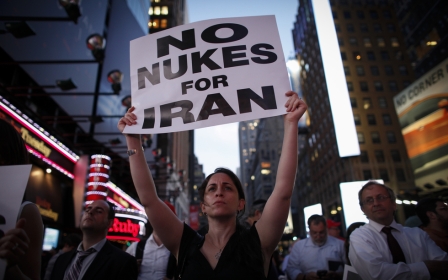