'Anything which does not have rivalry or whose management is monopolised is flawed', warns Iranian president "The people made the revolution in order to wipe out corruption," Rouhani told delegates at a conference in Tehran.

"Continuation of corruption and the spread of corruption would mean the system and fundamentals of the revolution are in danger."

Iran is considered one of the world's most corrupt places. It was ranked 136th out of 175 countries on Transparency International's corruption index for 2014.

The main areas where graft thrives in Iran include the paying of bribes to facilitate trade in a country where state institutions such as the military exert control in businesses ranging from telecoms to oil sales.

"Monopoly is the cause of corruption and we must fight against monopolies. Anything which does not have rivalry or whose management is monopolised is flawed," Rouhani said.

And in May, a businessman convicted of masterminding a $2.6 billion banking scam, the biggest fraud case in Iran's history, was hanged.

Mir Hossein Mousavi and Mehdi Karroubi have been kept incommunicado since February 2011 after leading months of protests alleging fraud in their defeat by Rouhani's predecessor Mahmoud Ahmadinejad.

"A thousand days have passed and Mousavi still isn't free" and "Our message is clear: end house arrest" several students said as Rouhani gave an address at a medical faculty in Tehran.

Mousavi and Karroubi challenged Ahmadinejad's re-election in 2009 and subsequently spearheaded a protest movement that the authorities suppressed, arresting thousands of people.

"We are pursuing the path we promised to take and that vow will not be broken," Rouhani responded to the students.

Fars did not provide any further information about the incident.

Rouhani's administration favours freeing the two opposition leaders, but doing so is not a decision that can be taken by the executive branch, according to several government members. 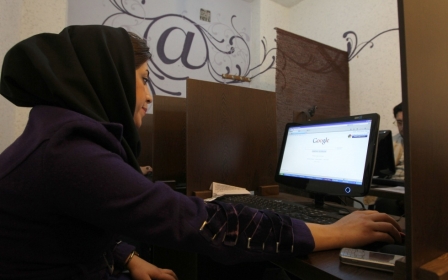