Iran election: With a Raisi presidency diplomacy is not doomed, experts say Ebrahim Raisi gestures after casting his vote during presidential elections at a polling station in Tehran, 18 June (Reuters/WANA)
By
Ali Harb
in
Washington

As Iranian and American officials hold indirect talks in Vienna to revive the nuclear deal, an electoral "one-man race" in Iran will likely propel a hardline conservative to the presidency.

With current President Hassan Rouhani unable to run because of term limits, his foreign policy - that is often described as pragmatic, if not moderate - will likely be replaced with a more one under judiciary chief Ebrahim Raisi.

Counterintuitively, a Raisi administration may help facilitate US-Iranian talks, experts say, but it could also pose some challenges.

An Iranian executive branch that is aligned with Supreme Leader Ali Khamenei, the conservative parliament, and the Islamic Revolutionary Guard Corps, will be able to negotiate from a position of strength domestically without having to fear backlash at home.

It will also be reflective of the positions of the main power centre when it comes to strategic decisions - the supreme leaders.

Conversely, if president Raisi, who is already under US sanctions over human rights abuses, adopts uncompromising rhetoric, it could harm the prospect of negotiations with the West and Iran's Gulf neighbours. 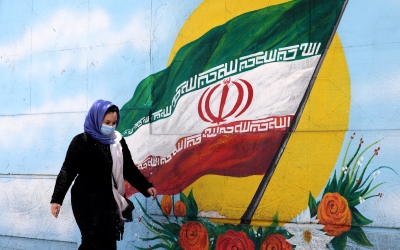 The new president will not take office until August, giving negotiators in Vienna weeks to finalise a return to the nuclear deal without being interrupted by the transfer of power in Iran.

Naysan Rafati, senior analyst on Iran at the Crisis Group, said the president is one of many stakeholders when it comes to foreign policy - with the parliament, defence establishment and ultimately the supreme leader having a say.

"On certain aspects of Iran's grand strategy and grand foreign policy, there's as much continuity from administration to administration as there is change because of the limits that there are on the executive branch as a whole," Rafati told MEE. "Now, that being said, style also matters in negotiation."

He added that with a Raisi presidency, Iran can move forward with talks free of internal divisions that a less conservative administration may face.

"It would mean all of the levers of power in Iran are in the hands of the conservatives - the judiciary, the parliament, the executive branch, and the supreme leadership, obviously," Rafati said.

"And in a certain sense, that means that we could see less infighting, less division, if they choose to pursue a policy.

"It also means that negotiating may become a little bit more difficult because their approach would be less conciliatory - perhaps more antagonistic, perhaps more, more strident."

Iran is currently negotiating with world powers to restore the Joint Comprehensive Plan of Action (JCPOA), which saw Tehran scale back its nuclear programme in exchange for lifting sanctions against its economy.

Former US President Donald Trump pulled out of the deal in 2018 and started piling sanctions on Iran, ushering in a financial crisis in the Islamic Republic that was exacerbated by the coronavirus pandemic.

In response to the American withdrawal, Iran has been enriching uranium well beyond the limits set by the agreement. It has also restricted the access granted by the deal to UN inspectors to its nuclear facilities.

US President Joe Biden's administration says it is looking to reimplement the deal through a mutual compliance framework. The sixth round of indirect talks in Vienna has been underway this week. International diplomats participating in the talks have been speaking of "progress" after each meeting while stressing that some challenges remain.

But failure to forge a path to restore the JCPOA before Raisi comes to power does not necessarily spell the demise of the deal.

After all, Khamenei has voiced support for efforts to revive the agreement, as well as Raisi during a presidential debate earlier this month.

But Sina Toossi, a senior research analyst at the National Iranian American Council (NIAC), a Washington-based advocacy group, says with a Raisi presidency, the JCPOA would be the "ceiling not the floor" for engagement with Washington.

That means that the US administration's stated plans of seeking a "longer and stronger" deal then using it as a platform to address broader issues with Iran are unlikely to materialise.

Moreover, there is a record of alleged human rights abuses during his time in the judiciary, including playing a role in mass executions in the late 1980s.

The Trump administration imposed sanctions on Raisi in 2019 over human rights violations.

"For these powerful, hawkish forces in the West who oppose engagement with Iran, I can see that Raisi will provide a more convenient excuse for them to really advocate against diplomacy with Iran," Toossi said.

For his part, Rafati said a hardline Iranian government would increase the political cost in Washington for engaging with Tehran.

The Iranian Guardian Council, a powerful constitutional institution, had barred many moderate, pragmatic, and even conservative candidates from running, practically writing off all of Raisi's serious competitors.

So why is the ultra-conservative judiciary chief being handed an almost clear path to victory?

Toossi said while Iranian elections have never been completely free and fair, since the 1990s, the vote for president has been competitive and consequential, with voters able to choose from a range of choices.

He added that ultra-conservative forces in Iran have benefited politically from Trump's maximum pressure campaign and are moving to tighten their grip on the system, especially with the question marks surrounding who would succeed Khamenei, 82.

"They've had this project to consolidate powers that sideline and ultimately kick out their moderate and reformist rivals from the system," Toossi told MEE.

"And with this election, we've seen it was unprecedentedly engineered from the get-go to make sure that Raisi has the most easy path to victory."