Fearful of a ferocious response from Trump, the Iranian leader listened to British advice and told Iraq's paramilitaries to stand down 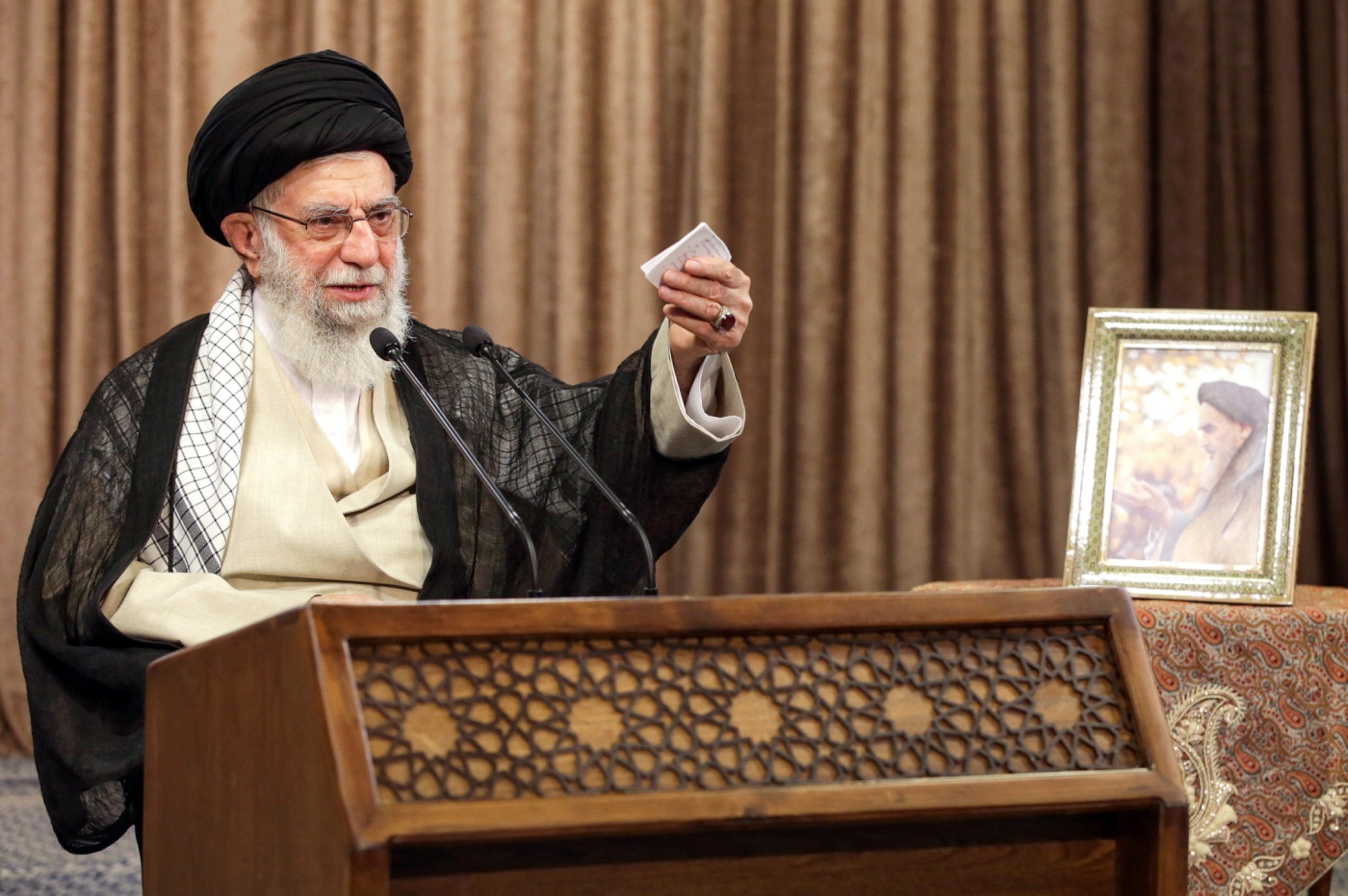 According to commanders of Shia armed factions and politicians, Khamenei’s orders were “explicit” and demanded the paramilitaries “immediately” cease their attacks.

“Khamenei's orders were straightforward and clear. All attacks targeting US interests in Iraq must stop,” a senior commander of an Iranian-backed armed faction involved in the attacks told Middle East Eye.

'Khamenei's orders were straightforward and clear. All attacks targeting US interests in Iraq must stop'

The US embassy in Baghdad, military bases hosting the US-led coalition forces and logistical support convoys have been subjected to almost daily attacks by Katyusha rockets, explosives and sometimes direct fire over the past three months.

Although these attacks have not caused significant losses, their frequency has bothered the Iraqi and US governments and raised the concern of diplomatic missions, especially after the targeting of UN and British convoys.

In response, US Secretary of State Mike Pompeo has threatened to close Washington’s embassy in Baghdad unless the attackers were brought to heel.

Besides those threats, Tehran has seen the need to give Prime Minister Mustafa al-Kadhimi’s government some respite. Already it is grappling with a financial crisis sparked by low oil prices, as well as the coronavirus pandemic, and the uncertainty surrounding the government’s collapse would cause Iran a fresh headache.

Kataeb Hezbollah, the faction most hostile to the US and accused of carrying out the majority of attacks, was first to respond to Khamenei’s order. It was quickly followed by Harakat Hezbollah al-Nujaba and other small factions.

"The Americans seek to inflame people against us in various ways, so we decided that thwarting the Americans’ efforts in this regard is more important than targeting the American embassy,” a prominent commander of one of the armed factions involved in these attacks told MEE.

"Calming the Iraqi street, preserving the Iraqi government and the political process is the priority now. Therefore, it was decided to suspend all attacks targeting US interests in Iraq until the danger passes.”

The significant shifting in the attitude of the Iranian-backed armed factions and the timing of the announcement of this unilateral truce has raised many questions about the real goal of this decision, its conditions, its time limits, the identity of the guarantor party, and, most importantly, who is making it.

Iraq has been one of the biggest arenas of conflict between the United States and Iran since 2003. Both nations control dozens of armed groups, as well as political and military leaders who are working to implement their agendas.

Iraqi officials said the US administration is afraid that armed groups linked to Iran will attack the Baghdad embassy to embarrass US President Donald Trump, who is seeking to win a second term in the 3 November election. It is a scenario that reflects the strategy employed by Tehran over recent months, and Washington’s fears are well-founded.

Armed factions had been encouraged to attack US targets to "pressure Trump and his allies in Iraq" and push him into taking reckless action that could cause him to lose the elections, Iraqi officials and armed factions commanders told MEE.

However, it seems that calculations changed after "the Iranians made sure of the seriousness of the threats that Pompeo conveyed through Iraqi President Barham Salih to strike Iranian interests and their allies inside Iraq", according to a senior Shia leader close to Tehran.

"The Iranians have received very important advice from a common ally that had a clear effect in changing their position," the politician, who was involved in talks with Iran, told MEE.

"The advice is to avoid provoking Trump at this stage as he is serious about his threats and because he is desperate and will not hesitate to do a reckless act that will cost everyone dearly,” the politician added.

That so-called “common ally” is Britain, a country believed by Shia leaders to be the real player in the Iraqi arena at present, and credited with persuading the Iranians to avoid provoking the Americans and follow the option of appeasement.

"No clear information is available, but all signs indicate that the British were the ones who played an influential role this time, although they did not appear in the picture as usual,” the politician said.

"They have communication channels with all parties, including the armed factions, and they have been negotiating for a long time with the factions, specifically Kataeb Hezbollah, with the aim of stopping the attacks.”

MEE has asked the UK’s Foreign Office for comment, but received none by the time of publication.

Iran’s volte-face coincided with a series of meetings, both open and surreptitious, held by UN Special Representative to Iraq Jeanine Hennis-Plasschaert with commanders of Iran-backed armed factions.

The last of which, with Kataeb Hezbollah leader and Popular Mobilisation Authority (PMA) chief of staff Abdulaziz al-Muhammadawi "Abu Fadak" earlier this month, prompted observers to link these meetings with the truce declared last week.

However, the truth is that Hennis-Plasschaert failed to reach any result in these meetings, commanders told MEE. Abu Fadak refused to meet with Hennis-Plasschaert three times, only eventually relenting at the request of Kadhimi, two of the commanders close to the Kataeb Hezbollah leader told MEE.

"Hennis-Plasschaert had nothing to do with the announced truce, despite her meeting with Abu Fadak focusing on the attacks against US interests in Iraq,” a prominent PMA commander close to Abu Fadak and familiar with the talks told MEE.

“She asked Abu Fadak to intervene, but he refused. He said that he cannot be a mediator between the factions and the Americans.”

The commander said the US made a “great mistake” when it killed Iranian general Qassem Soleimani and Kataeb Hezbollah co-founder Abu Mahdi al-Muhandis in a drone strike on Baghdad airport in January. The pair were the “two most important people” responsible for “preserving the balance in Iraq, and could have stopped these attacks with a word”, he said.

"The Americans are the ones who started this mess, and they have the power to end it by leaving Iraq. The solution is for the Americans to leave within a reasonable time limit, not three years as they are requested,” the commander added.

"Abu Fadak offered the Americans a withdrawal time limit of two to three months, guaranteeing them full protection and assistance in transporting their equipment, machinery and personnel to Kuwait if they agree.”

Hennis-Plasschaert was subjected to widespread criticism in Iraq for meeting Abu Fadek, accused of implicitly recognising his power and influence. But her mission was not, in fact, a complete failure.

The UN envoy’s dialogues are credited by some for providing a way out for the rest of the factions to agree to the ceasefire without seeming beholden to Iran.

"[Hennis-]Plasschaert was the joker of the negotiations that led to the armistice between the factions and the American embassy,” a commander of one of the factions involved in the attacks told MEE. "She played the role of mediator and was the indirect channel of communication between the two parties

"She worked to find a middle area in which the two parties could meet. Therefore, it was decided to stop the attacks and calm the situation until negotiations mature, and then the time limit for withdrawal and truce will be determined."

The commander stressed that the UN and Hennis-Plasschaert provided the armed groups no guarantees, but the envoy’s mentality as a former Dutch defence minister “has created a kind of understanding between us and her”.

"At this stage we are confident that she will succeed in managing this file," he said.

The United Nations’ mission in Baghdad told MEE it had “no comment at this stage” regarding the allegations over Hennis-Plasschaert’s negotiations.

Unusually, Khamenei’s order was not transmitted to the armed factions through regular channels or Iranian officials working on Iraq.

Instead, “due to its importance”, the commanders of the most prominent factions, including the Badr Organization, the oldest Iranian-backed Shia group in Iraq; Kataeb Hezbollah; and Asaib Ahl al-Haq, the most powerful faction, were summoned to Qom to meet Khamenei, at least three of the factions’ leaders told MEE.

There was more than one meeting with Khamenei.

'Khamenei says that Kadhimi is Shia, regardless of whether he is bad or good from our point of view'

One was with Badr Organisation leader Hadi al-Amiri, and another with representatives of Kataeb Hezbollah, Asaib Ahl al-Haq, al-Nujaba and Iranian advisors, in addition to the person in charge of the Iraq file.

"The essence of the orders that were issued were to preserve power in the hands of the Shia. That is, to preserve the position of the prime minister and the current government,” a senior commander of an Iranian-backed armed faction told MEE.

"Mr Khamenei says that Kadhimi is Shia, regardless of whether he is bad or good from our point of view, and he will eventually leave this position sooner or later. But the position must remain in the hands of the Shia.”

“Therefore, any activities that might threaten the Iraqi government or place it at the mercy of the Americans must be stopped immediately,” he said.