Mohsen Fakhrizadeh, alleged to be the architect of an Iranian military nuclear programme, was assassinated east of Tehran, the Iranian defence ministry confirmed on Friday.

Iranian state media said the scientist was targeted in Absard city in Tehran province's eastern Damavand county, with "terrorists bombing a car before shooting at Mr Fakhrizadeh's car". He was then taken to hospital, where he died.

"In the last days of the political life of their... ally [Trump], the Zionists seek to intensify pressure on Iran and create a full-blown war," Hossein Dehgan tweeted.

"We will strike as thunder at the killers of this oppressed martyr and will make them regret their action."

On Friday evening, Sheikh Naim Qassem, deputy leader of Iran's closest ally Hezbollah, condemned the attack and said in an interview with Al Manar TV that the response for Fakhrizadeh's assassination is in Iran's hands.

He said Fakhrizadeh was killed by "those sponsored by America and Israel," adding that the assassination was part of a war on Iran and the region.

Who was Mohsen Fakhrizadeh?

Israeli Prime Minister Benjamin Netanyahu's office and the White House have declined to comment on the killing.

Meanwhile, former head of the CIA John Brennan described the assassination as "criminal" and "highly reckless".

Sina Toossi, a senior research analyst at the National Iranian American Council, said the assassination comes as Trump has become "undoubtedly desperate" after Washington's "maximum pressure" campaign against Iran failed to yield the results hoped for by the US president and his allies - Netanyahu and Saudi Crown Prince Mohammed bin Salman.

"There are many signs that they now wish to escalate tensions further with Iran. Their best hope is to create a destructive situation that ties Biden's hands diplomatically and prevents any restoration of the [Iran nuclear] deal," Toossi told Middle East Eye. 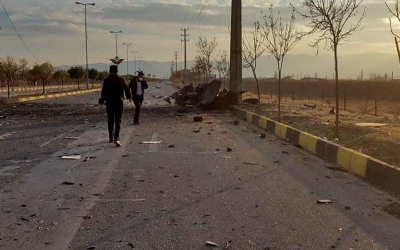 "It's diplomatic sabotage, and we are likely to see more actions like this in the lead up to Biden's inauguration on January 20th," Toossi said.

Fakhrizadeh became the face of Iran's nuclear ambitions when identified in the International Atomic Energy Agency's 2015 "final assessment" of open questions about Iran's nuclear programme and whether it was aimed at developing a nuclear bomb.

Still, Toossi noted that the killing of Fakhrizadeh would not set back the country's nuclear programme.

"Iran's nuclear programme is institutionalised and the loss of one scientist, however influential his role in the programme was at one point, won't set back Iran's nuclear capabilities," he said.

The assassination comes at a time of rising tensions, as Tehran fears Trump may launch attacks before his term ends.

Reuters and the New York Times reported earlier this month that Trump had mulled options to attack Iran but held off from military action.

Meanwhile, Middle East Eye this week reported that top Iranian general Esmail Qaani told Iran's proxies in Iraq to refrain from any attacks on US targets, fearing Trump might be spurred to initiate a conflict.

It was widely reported that Netanyahu joined him in Saudi Arabia, where they are understood to have met the hawkish Crown Prince Mohammed bin Salman. Riyadh denies the meeting took place; Israeli officials neither confirmed nor denied Netanyahu's visit.

Middle East Eye reported on Tuesday, before Fakhrizadeh's killing, that the crown prince was reluctant to agree to Netanyahu's demands to agree to an attack on Iran.

"In the meeting, Netanyahu was advocating hitting Iran. Pompeo did not commit either way," a Saudi source told MEE.

Fakhrizadeh was mentioned by name in a 2018 speech, when Netanyahu detailed an archive of nuclear plans stolen from Iran. "Remember that name, Fakhrizadeh," Netanyahu said at the time.

In the same speech, the Israeli leader said the scientist had continued to work on "special projects" at the Iranian defence ministry after his military nuclear outfit was closed.

According to Melman, Fakhrizadeh was wanted by Mossad and had previously escaped an assassination attempt.

Tehran has not 'taken the bait' - so far

Fakhrizadeh is the second top official Iran has lost to assassination this year. On 3 January, a US air strike in Baghdad killed Qassem Soleimani, the most senior commander overseeing Tehran's foreign military ventures.

Fakhrizadeh was the Gen. Sulaimani of Iran's nuclear and missile program.

That killing led to soaring tensions, during which Iran responded with a volley of ballistic missiles against bases in Iraq hosting US soldiers.

Though no US soldiers were killed, a civilian aircraft carrying 172 passengers was mistakenly shot down by the Iranian military, which feared an American counterattack.

Toossi said that while there may be calls for a quick and violent retaliation to the scientist's killing, Tehran had "not taken the bait on these overt escalatory acts" thus far.

"If Iran reacts in an overt way, it may fall into the trap envisioned by Netanyahu and an escalatory cycle will take off," Toossi said.

"However, if the past is precedent, Iran will likely bide its time and react in an indirect way and may target Israeli interests and civilians abroad," he said.

"For example, the 1992 Israeli assassination of Hezbollah leader Abbas Musawi was followed by attacks on the Israeli consulate in Buenos Aires. In 2012, a bus carrying Israeli civilians in Bulgaria was also blown up in an attack Israel has attributed to Iran. This was after the assassinations of Iranian scientists during that time."