Iran prepared to continue oil shipments to Venezuela despite US sanctions: Report

Islamic Republic has sent around 1.5 million barrels to Venezuela since April, despite US sanctions against both countries Since April, Iran has sent five tankers to Venezuela (AFP/File photo)
By
MEE and agencies

Iran says it is prepared to send up to three tankers of oil to Venezuela every month, despite the threat of more US sanctions against two of Washington's biggest rivals.

Since April, Tehran has sent five tankers totalling about 1.5 million barrels to Caracas, which has seen oil production fall to its lowest levels since 1945.

The South American country is in desperate need of petrol and other refined fuel products due to hyperinflation, US sanctions, a severe fuel shortage, and the Covid-19 pandemic.

Five trading and industry sources close to the oil ministry told Reuters on Monday that Iran was planning to keep up the shipments, offering a potential lifeline to the embattled government of President Nicolas Maduro. "This is a long-term strategic decision made by the state to expand influence," said one Iranian trader familiar with the policy, likening it to Iran's cargoes for Syria.

The Trump administration, which is seeking to block Iran's energy trade and bring down Maduro, has threatened reprisals and warned ports, shipping companies and insurers against facilitating the tankers.

A State Department spokesperson said the United States would not tolerate "meddling" or sanction-breaking to support Venezuela, but did not specify what actions could be taken.

"The international business community should already be aware of the legal risk of any transactions with the illegitimate and tyrannical regime of Nicolas Maduro," he said.

"It is no surprise that the deeply corrupt and oppressive Iranian regime would find a kindred spirit with Maduro's brutal kleptocracy."

On Saturday, a Colombian businessman accused by the US of being the main money launderer for Maduro's government was detained on his way to Iran.

The Department of Justice said that Alex Saab, 48, was detained in Cape Verde, an archipelago off the coast of Western Africa after his plane was making a fuel stop during a trip from Caracas to Tehran.

The US indicted him in July 2019 and another businessman for diverting $350m to overseas accounts.

Saab is also suspected of being involved in the oil industry by helping Maduro's government purchase oil from Iran in exchange for gold, in order to get around US sanctions.

His Miami-based lawyer, Maria Dominguez, denied the charges saying her client was a "food business entrepreneur". 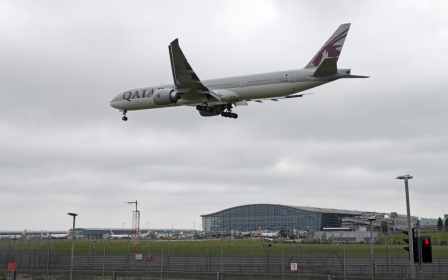