Iran has sent five planes full of food to Qatar as neighbouring Gulf countries continue to impose sanctions against the energy-rich kingdom.

"So far five planes carrying perishable food items such as fruit and vegetables have been sent to Qatar, each carrying around 90 tonnes of cargo, while another plane will be sent today," Iran Air spokesman Shahrokh Noushabadi told AFP.

"We will continue deliveries as long as there is demand" from Qatar, Noushabadi added, without mentioning if these deliveries were exports or aid.

Three ships loaded with 350 tonnes of food were also set to leave an Iranian port for Qatar, the Tasnim news agency quoted a local official as saying.

The port of Dayyer is Iran's closest port to Qatar.

To help prepare its citizens for aid from Turkey, Qatari officials have issued Turkish translation sheets for its nationals and residents, after Turkey sent cargo planes full of milk, yoghurt and poultry to circumvent the potential for any food shortages in the coming weeks.

In the biggest diplomatic crisis in the region in years, Saudi Arabia, Bahrain and the United Arab Emirates, plus Egypt and Yemen, on Monday announced they were cutting all ties with Qatar, accusing it of supporting extremism.

Kuwait's foreign minister said on Sunday that Qatar was ready to listen to the concerns of other countries in the Gulf, state news agency KUNA reported, and that his country would continue its efforts to patch a rift within the Gulf.

"[Kuwait] affirms the readiness of the brothers in Qatar to understand the reality of the qualms and concerns of their brothers and to heed the noble endeavours to enhance security and stability," KUNA quoted the Foreign Minister Sheikh Sabah al-Khalid al-Sabah as saying.

"The state of Kuwait will not abandon its efforts and will continue its good will efforts to patch the rift and find a solution that will deal with the root cause of the causes of the dispute... in the brotherly relations," he added.

Meanwhile, Iran has also urged Qatar and neighbouring Gulf countries to engage in dialogue to resolve their dispute.

The Islamic Republic has also opened its airspace to about 100 more Qatari flights a day, after Saudi Arabia, Bahrain and the United Arab Emirates banned Qatari planes from their airspace.

Qatar has said citizens of states that have cut ties with the emirate will be allowed to stay in the country despite measures against its own nationals.

A statement carried on state media said Doha would "not take any measures against residents of Qatar who hold the nationalities of countries that severed diplomatic ties or lowered diplomatic representations with the state of Qatar, on the back of hostile and tendentious campaigns against the country".

It said Qatar was acting in "accordance with its firm beliefs and principles".

The decision will affect more than 11,000 people from the Gulf states of Saudi Arabia, the United Arab Emirates and Bahrain alone, according to official figures.

As well as cutting air, sea and land links with Qatar, the sanctioning Gulf states ordered their citizens to leave within 14 days.

Amnesty International has said that the Gulf states opposed to Qatar were "toying" with people.

"For potentially thousands of people across the Gulf, the effect of the steps imposed in the wake of this political dispute is suffering, heartbreak and fear," said the human rights group. 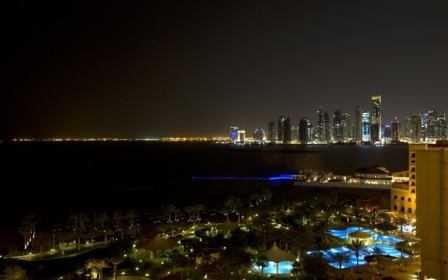