Iranian forces board tanker in Gulf of Oman: US Iranian forces boarded a tanker in international waters in the Gulf of Oman, using a helicopter and two ships to take over the vessel for several hours, US officials said.

They also posted grainy black-and-white footage of the helicopter hovering low over the vessel and special forces personnel fast-roping onto the deck.

"Today in international waters, Iranian forces, including two ships and an Iranian 'Sea King' helicopter, overtook and boarded a ship called the 'Wila'," the US Central Command said in a tweet on Wednesday.

A US defence official said the Iranians released the vessel, a Liberian-flagged oil and chemicals tanker, after holding it for four to five hours.

The incident occurred in international waters in the Gulf of Oman, just 32 kilometres off the coast of the United Arab Emirates.

"Iranian special forces fast roped from the Sea King on to the ship," the official told AFP on Thursday.

"A coalition ship monitored the event but did not receive a distress call from M/T Wila."

Bloomberg said the vessel had been floating off the eastern coast of the United Arab Emirates for the past month but that it appeared to have picked up a shipment in July near the Iraqi oil terminal of Basra.

The waters where the ship was boarded, near the Strait of Hormuz, are a chokepoint for a third of the world's seaborne oil.

Iran and its arch enemy the United States have traded barbs in the past year over a spate of incidents in the sensitive waters of the Gulf.

Tensions have escalated since 2018 when US President Donald Trump withdrew the United States from a multinational accord that froze Iran's nuclear programme, and reimposed crippling sanctions on its economy. 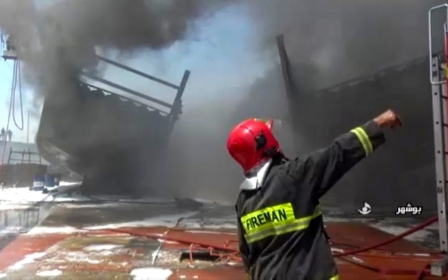