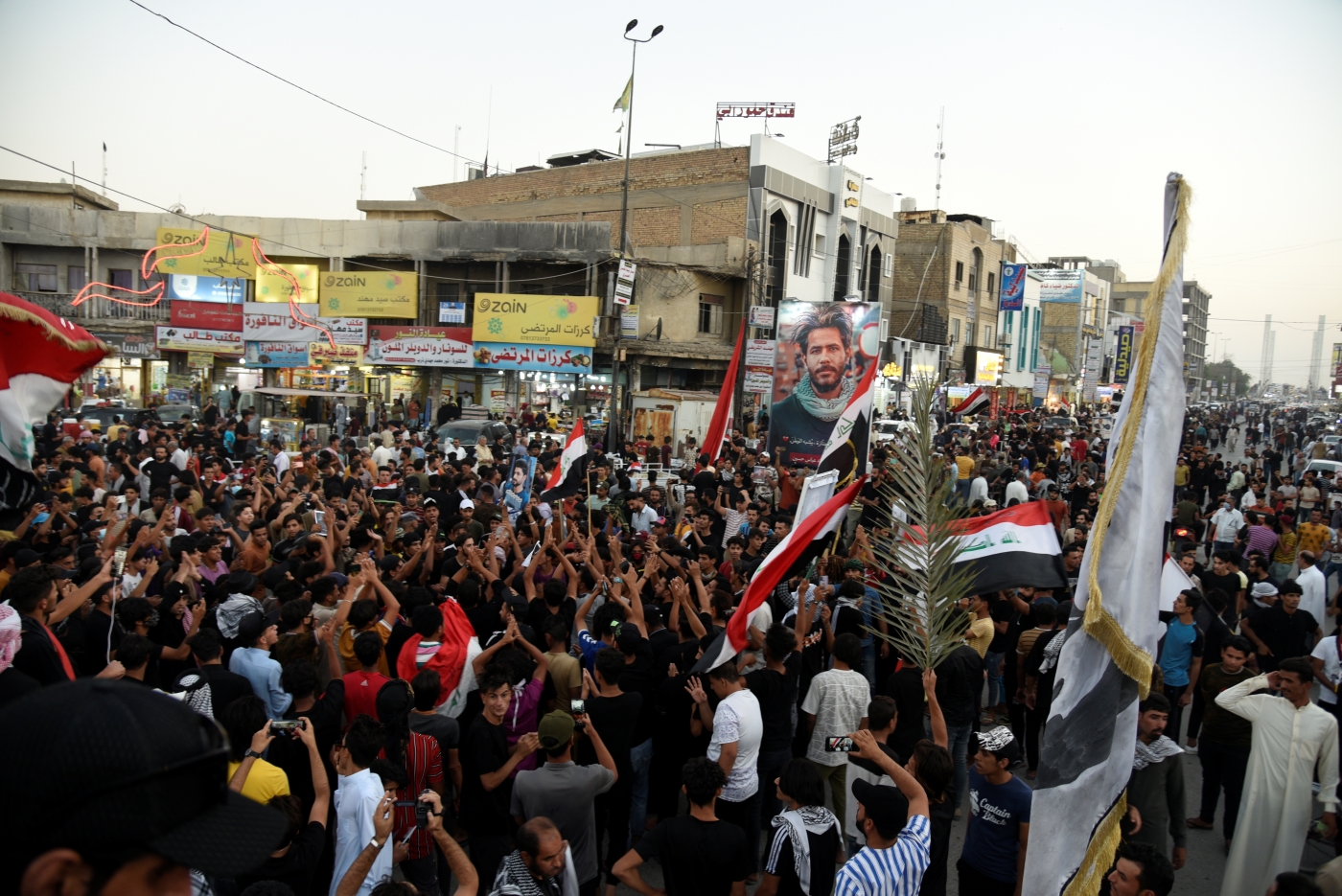 The small town of Suq al-Shuyukh on the banks of the Euphrates river in Iraq’s southern Dhi Qar governorate was quiet on Sunday evening.

Polling stations in the country’s parliamentary elections had closed two hours earlier and some residents were idly gathered near local candidates’ homes and offices, awaiting the preliminary results of the voting.

At 8pm, the calm was shattered in one of the strongholds of the 2019 anti-government demonstrations by the sounds of horns and enthusiastic songs raised from dozens of cars, motorbikes and tuk-tuks roaming the city streets.

The car, which was starting to wobble because of the crowd, stopped in front of the office of one of the candidates of the Iran-backed Fatah bloc, and the young man continued to chant. This is the fifth national parliamentary election to be held in Iraq since the 2003 overthrow of Saddam Hussein in a US-led invasion.

Its date was brought forward to calm the widespread anti-government demonstrations that swept Baghdad and nine southern governorates in October 2019, when hundreds of demonstrators were killed and dozens of activists and journalists were kidnapped and arrested.

Tishreen, which means October in Arabic, is the name that was given to the protest movement embraced by many young Iraqis, especially in the south.

Preliminary results showed that Nissan Abdel-Redha al-Zayer, a 44-year-old local teacher, had obtained the highest number of votes in her constituency, and her supporters took to the streets to celebrate her victory.

Zayer was the candidate for Imtidad, a party which emerged from the Tishreen protests.

"Nissan's victory is our victory. It is the victory of Tishreen demonstrators and the victory of the blood of our martyrs and our sacrifices," prominent activist Ammar al-Tamami, 32, told MEE.

"We are the ones who adopted her [Nissan’s] electoral campaign and ran it with our own resources and without previous experience or financial or political support.

Many were betting on our failure, they were saying that Nissan would fail and would not withstand the rival candidates who were spending huge money on their electoral campaigns and lavishing services and promises on the people. But we succeeded by a large margin from our closest competitors. This is a shout out to everyone who bet on our failure."

The preliminary results announced by the Independent High Electoral Commission (IHEC) later showed great progress for the candidates of the small political forces that emerged from the October movement.

Imtidad alone won nine seats, five of them in Dhi Qar, 400 km south of Baghdad. The party expects to pick up more seats when the final allocation is announced by the IHEC.

"People in Dhi Qar voted for the October candidates in retaliation for the Fatah [leaders] who underestimated them and ignored their needs and desires," Ali al-Ghuraifi, a political observer who focused on the changes taking place in the southern provinces, told MEE.

'A process of revenge'

Al-Ghuraifi said that "all signs indicate that it is a process of revenge. Imtidad candidates won the votes of the disaffected youth against traditional forces and the votes of the elite and the elderly who felt that the leaders of Fatah treated them with condescension and underestimated them."

Dhi Qar was second only to Baghdad in terms of the number of victims who were killed or injured during the 2019 October anti-government demonstrations.

The protests initially focused on poor public services, high unemployment and complaints of corruption in state institutions. But the bloody crackdowns led against demonstrators by the security forces and some armed Shia Muslim factions allied to then-prime minister Adel Abdul-Mahdi raised the ceiling of demands to include the overthrow of the government, the change of electoral law and the holding of early elections. The killing by security forces of 32 demonstators on al-Zaytoon bridge in Dhi Qar’s main city of Nasiriyah in November 2019 led to the overthrow of the government of Abdul-Mahdi.

Although many political movements emerged from the October demonstrations, only a few of them decided to participate in the early elections, "as they did not believe that the required change would be achieved," Sajad Abed, a local activist, told MEE.

Imtidad, the most prominent of these movements, and its candidates and audience were "the most stubborn and determined", said Abed.

One of the biggest challenges Imtidad faced, according to Zayer, was winning people’s support without offering them the usual incentives and promises offered by traditional political parties.

"Whenever we attended an electoral rally, people would ask us for money, gifts or services, and they could not believe that we were completely dependent on the simple donations that some youth were providing,” she told MEE.

"I and a group of youth who volunteered to run my electoral campaign, were laughing and joking about the situation whenever we were unable to secure small sums of money to buy water and juice for one of our rallies. The situation, despite its bitterness, was a great incentive for us to continue and insist on winning."

Despite the lack of resources, Zayer was comfortably elected in the fourth constituency, which covers the towns and villages of southern Dhi Qar, ranking tenth in the list of candidates who received the highest number of votes in Iraq, and first among women candidates, according to the Electoral Commission.

"I myself did not expect such a big win,” she said. “The real owners of this victory are the youth who worked with me and those who believed in me and voted for me. I am very happy with what we have accomplished together. I promise that I will never let them down.”