Up to 100,000 people could be forced to find new accommodation despite vulnerabilities, food insecurity and the raging pandemic Authorities in Iraq have closed a number of displacement camps with little or no notice to residents, leaving thousands in a vulnerable state amid the coronavirus pandemic and harsh winter conditions.

As many as 100,000 displaced people were at risk as the closures continue.

Marine Olivesi, media and advocacy coordinator at the Norwegian Refugee Council (NRC), told Middle East Eye that the initial round of  camp closures  started  around one year ago, but had intensified in recent weeks.

“Towards the end of October we heard of a few camps being closed, but every day we’re hearing of new camps that are closing. There seems to be a big push to close most, if not all camps in federal Iraq,” she said. Years of conflict with the Islamic State (IS) group have seen over 3.3 million displaced people in Iraq since 2014, with over 360,000 people living in informal settlements, including unfinished and damaged buildings.

Iraqi authorities had started closing camps in order to force people to return to their homes, often in cities and towns wrecked by the fighting.

According to the NRC, the most recent camp closurse began on Thursday, when people were forced to leave the Hammam al-Alil camp in Ninevah province on buses. They were later left to set up makeshift camps in empty gardens and open areas,.

So far, a total of five camps had been closed, and seven others were in the process of being closed.

Over 3,100 people were forced to leave the Hammam al-Alil camp on Thursday, including 2,000 children. According to the NRC, hundreds had been forced to leave camps every day since then.

“Because of the short notice given to families, it’s been quite difficult for people to figure out where to go next," Olivesi said.

"Most people don’t have a home to go back to, some are being hosted by relatives and others are setting up tents next to destroyed homes in Mosul. The camp closures are making people more isolated and vulnerable.”

For some families forced to leave the camps, the situation has become more critical because of the unsafe environment and lack of support. Eleven people had been killed late on Sunday after IS militants attacked tribal forces west of Baghdad.

“We met a family that was forced to leave the camp a year ago. They tried to save all their money to pay rent for an apartment but it ran out and there was nothing they could do. So, they moved into a vacant building that’s unfinished, unsafe and destroyed, living there with their children,” Olivesi said.

The closure of the camps has left thousands of people in a precarious situation, no longer able to access the services and support that would have been available to them in camps, such as legal advice, schools and assistance with civil documentation.

'Most people don’t have a home to go back to, some are being hosted by relatives and others are setting up tents next to destroyed homes in Mosul. The camp closures are making people more isolated and vulnerable'

Those who had been rendered homeless as a result of the closures can face stigma, rejection and violence. Some also face security challenges when trying to return home to their area of origin.

The NRC has called on the Iraqi government to provide a clear plan for the closures of the camps, giving people sufficient notice so that they can make alternative plans.

It has also asked the government to involve humanitarian organisations, in order to prevent people from being turned away from checkpoints and to ensure their safety and protection.

In a statement, NRC Secretary General Jan Egeland called on the international community to support Iraqis who are being displaced.

“We urge the international community to keep supporting the Iraqis forced out of camps, many of whom have no chance of returning home. With the pandemic and onset of winter, it is urgent to scale up emergency support,” he said. Refugees
The mental health challenges that refugees have to face 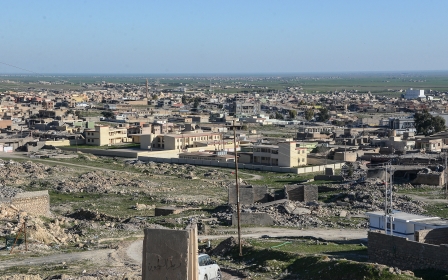 Migration
Nearly half of young Arabs have considered leaving their country