Demonstrations which began in Basra have extended to Najaf, Nasiriya, Baghdad and Amara, where two protesters died 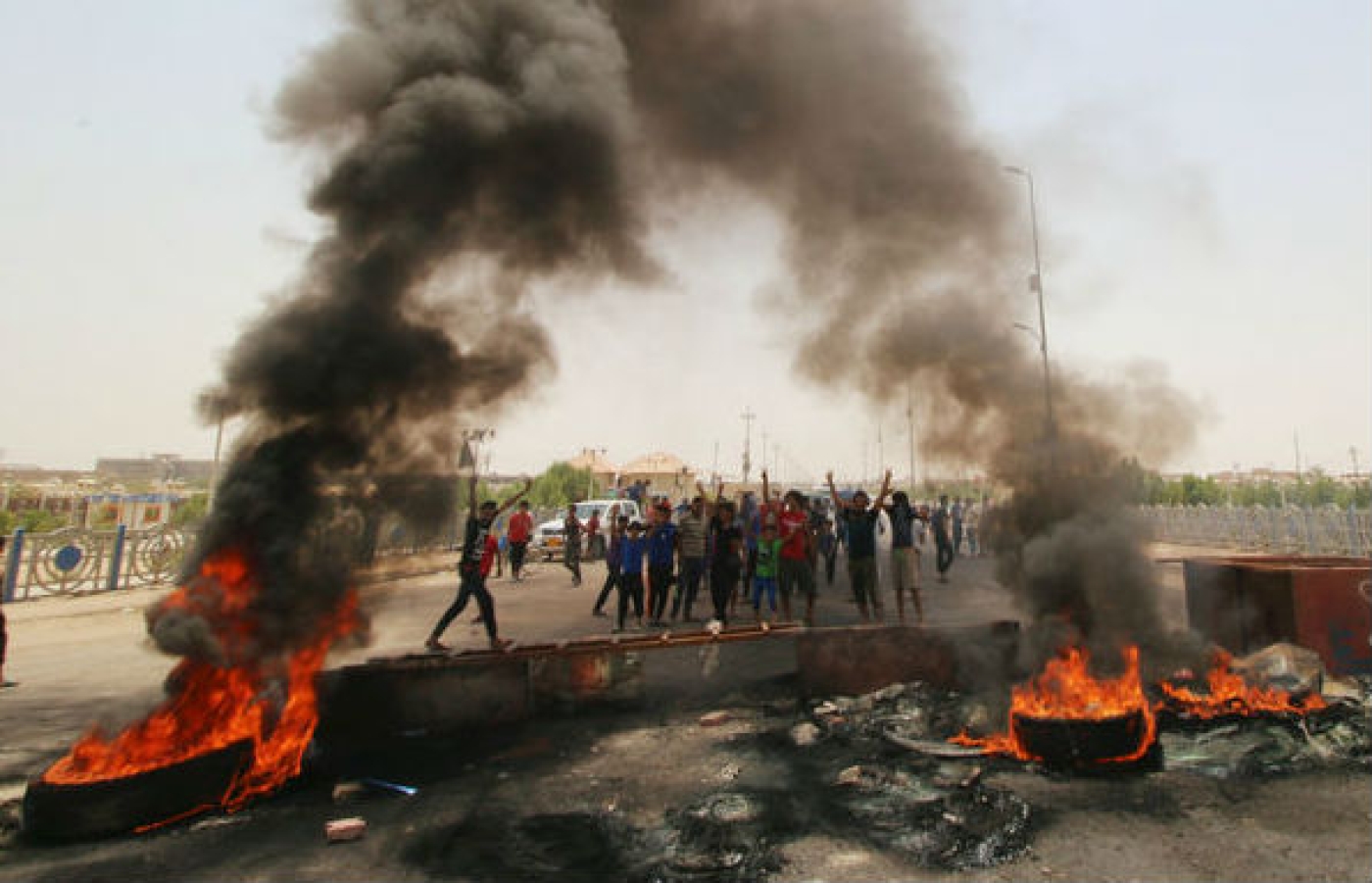 Protests against high unemployment, poor government services and corruption that began in Basra have extended to several other Iraqi cities, including Najaf, Amara, Nasiriya and Baghdad.

Two more protesters were reported on Saturday killed overnight in Amara, the capital of the Maysan province on the border with Iran, bringing to three the number of demonstrators killed since the protests erupted on Sunday in neighbouring Basra.

A small protest also took place after midnight in the northern Baghdad district of Al-Shula amid a heavy deployment of security forces, a security source told AFP.

Iraq's National Security Council urgently convened a meeting on Saturday in the Iraqi capital under the chairmanship of Prime Minister Haidar al-Abadi, where it was decided to cut internet access in the city, Turkey's Anadolu Agency reported.

The government was concerned that the demonstrations were spreading to other parts of Baghdad, the agency said.

Following Saturday's meeting, the office of Abadi, who visited Basra on Friday, issued a statement accusing "infiltrators" of feeding on "peaceful protests to attack public and private property".

"Our forces will take all the necessary measures to counter those people," the statement said.

A spokesman for the Maysan health authorities, Ahmad al-Kanani, said the two people killed had died from gunshot wounds in Amara.

It was not clear who killed them but Kanani said there had been "indiscriminate gunfire" in the city.

Dozens more have been wounded in the past week, including security forces, according to medical sources.

Overnight in Maysan, several protests were held outside the headquarters of various political parties - including Abadi's Dawa Party - and some were set on fire, Iraqi media reported.

Unidentified calls were also posted on social media for massive demonstrations to take place on Saturday in Baghdad.

Some urged demonstrators to head for the fortified Green Zone, an area out of bounds for most Iraqis where the country's key institutions and embassies, including the US and British missions, are located.

Two airport security officials said hundreds of demonstrators had entered Najaf airport's main hall and walked on to the tarmac on Friday.

One of Iraq's top clerics, Grand Ayatollah Ali al-Sistani, expressed solidarity with protesters, saying they faced an "extreme lack of public services" such as electricity in the suffocating summer heat.

"We can only stand with our dear citizens in their demands as we feel their great suffering," Sistani said through an aide during a Friday sermon heard on live television.

Earlier on Friday, residents took to the streets of the oil-rich southern city of Basra for a fifth straight day and blocked access to the nearby commodities port of Umm Qasr.

The protests, which have included demonstrators setting tyres ablaze to block roads and trying to storm government installations, erupted on Sunday and further gained traction when security forces opened fire at the crowds, killing a protester.

Iraqi politicians face the growing unrest as they try to form a coalition government after a 12 May parliamentary election tainted by allegations of fraud.

A political bloc led by cleric Moqtada al-Sadr won a majority in the poll on an anti-corruption platform that has appealed to citizens across Iraq's electorate.

In Amara, protesters occupied the headquarters of the provincial governorate, threw stones at branches of the Dawa party and the powerful Badr Organisation, which has close ties to Iran, and beat up policemen, said a security official.

A port worker said the road leading into the Umm Qasr terminal was blocked and trucks had no way of getting in or out. Port officials told employees to go home.

Abadi, who on Friday had flown straight to Basra from Brussels, where he had attended a Nato summit to discuss the Islamic State group, held talks with officials to discuss the unrest.

Protesters hoping to catch his attention stormed the hotel where he was meeting tribal leaders, but he had already left.

Basra oil officials have said the protests, which have also taken place near major oilfields, have not had an impact on crude production.

Oil exports from Basra account for more than 95 percent of OPEC producer Iraq's state revenues, and any potential disruptions to production could severely impact the country's limping economy.

Long neglected, Basra is without an effective water treatment system. Many of its waterways are stagnant cesspools. State officials blame a public funding crisis caused by years of low oil prices.

"Unless our demands are met, we will take steps to escalate. We will stop the activities of oil companies and will not allow them to hire foreigners," Malik said.