Iraqi president: Keep us out of any US-Iran war

On a three-day tour of London, Barham Salih says everyone needs to 'cool down' amid escalating Middle East tensions 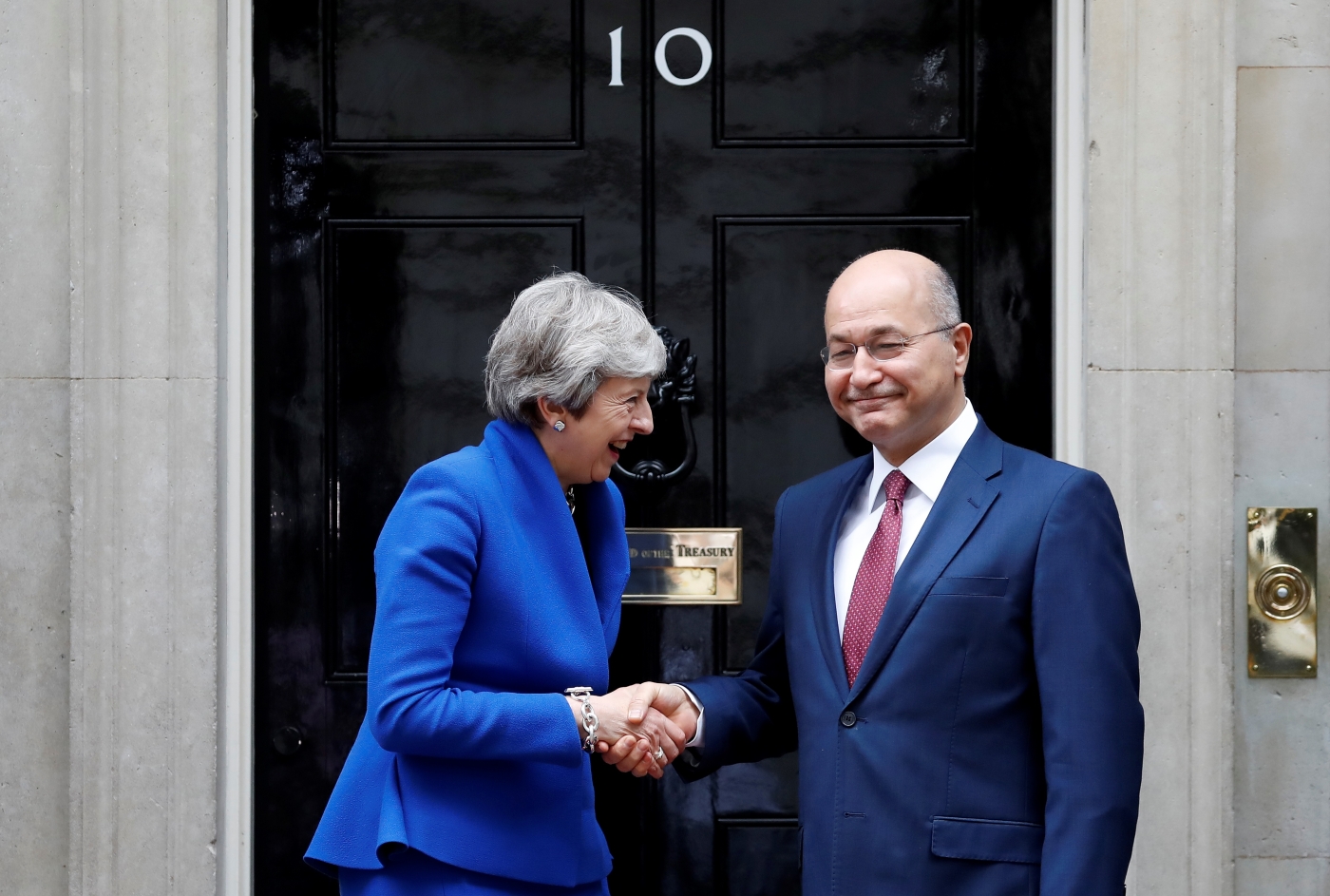 Iraqi President Barham Salih said on Wednesday his country does not want to find itself embroiled in another conflict as tensions heat up between the US and Iran, saying everyone needed to “cool down”.

“We don’t want to become a footnote of yet another conflict,” Salih told an audience at London-based think tank Chatham House.

“We have not finished the last war. The war against terror has yet to be accomplished.”

Only just recovering from the conflict against the Islamic State group (IS), whose territorial defeat in Iraq and Syria was declared earlier this year, Iraqis have been looking nervously on in recent weeks as relations between Washington and Tehran worsen.

The United States has accused Iran of attacking ships in a strategic waterway in the Gulf, while Iranian forces shot down a US drone last week.

Caught between the US, which has a significant military presence in the country, and Iran, with whom Baghdad has multiple and deep-lying links, Iraq could find itself on the frontline of any future conflict.

However Salih, who is on a three-day tour of London, said Iraq refuses to be a zone for proxy conflict.

“We don’t want our territory to be used as a staging post for any hostile action against any of our neighbours,” he said.

“Instead of war being fought on our territory and with our resources, we want to spend our resources on reconstruction and really move beyond what we have been condemned to.”

Salih, who on Tuesday met with British Prime Minister Theresa May and Foreign Secretary Jeremy Hunt, pointed to a multitude of domestic issues Iraq must face, quite apart from the political “storm sweeping across the Middle East”.

The president noted that 12,000 new school buildings are urgently required, some 70 percent of the population is under 30 and Iraq’s stuttering economy is in dire need of rejuvenation. Last year, a series of protests against corruption and lack of opportunities and services rocked the country, and have begun to crop up again in Iraq’s deprived south.

However, Salih insisted there have been improvements over the past year that have been “tangible, serious, significant and should not be underestimated”.

One measure of progress, the president said, were Monday’s appointments of top-level cabinet ministers – albeit eight months after Prime Minister Adel Abdel Mahdi was appointed.

The approval of the defence, interior and justice ministers was evidence Iraq is moving towards a more technocratic, institutional government, Salih argued. He acknowledged, however, that the rejection of the only woman proposed for a cabinet job was a blot on the government’s copybook.

“The politics of Iraq from afar looks messy, and it is messy, it’s fragmented,” Salih said. “When you look at British politics, you never have a dull moment either, certainly these days.”

Salih, who took the presidency in 2018, said one of Iraq’s priorities was regularising the country’s multiple armed groups under state control.

In response to IS’s 2014 takeover of a third of Iraqi territory, multiple Iran-backed militias known as the Hashd al-Shaabi mobilised to fight the militant group.

Since IS was expunged from the majority of the land it held in Iraq in the summer of 2017, the Hashd al-Shaabi militias have remained influential.

However, Salih said the militias must be institutionalised under law, despite their key role in defeating IS.

Turning to sectarianism, Salih revealed that he last week officially invited Pope Francis to visit Iraq and preach at the site of the ancient city of Ur, believed to be the birthplace of Abraham, an important figure in Christianity, Islam and Judaism.

“I am hopeful and praying he will come,” Salih said.

“I think it will be quite an important statement for Iraq, quite a statement of support for religious tolerance and coexistence.” Islamic State
UN rights chief: 55,000 IS fighters and families should be tried or freed