When IS burned and poisoned olive groves in northern Iraq, they left a devastating legacy which will long outlast their bloody rule 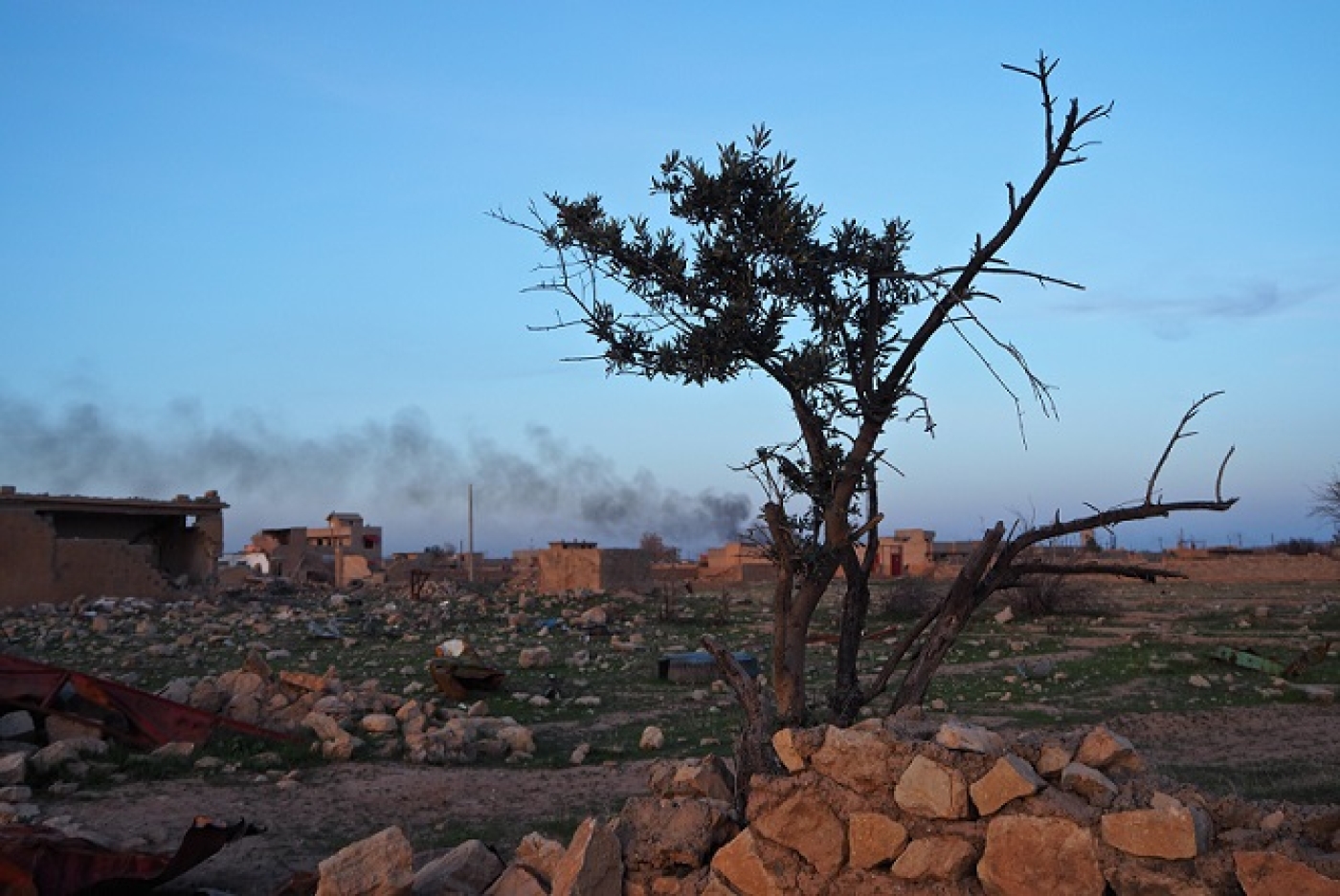 Four years after they were burned, a few trees in Tal Afar put out new branches (MEE/Tom Westcott)
By
Tom Westcott

Before the Islamic State (IS) group seized control of the rural town in mid-2014, its olive-loving locals had not imported the fruit for decades, relying entirely on produce from their own olive groves, which amply supplied the town and outlying villages.

One of the first things IS militants did when they seized control of Tal Afar in June 2014 was to set olive groves and orchards ablaze, destroying a thriving local industry which had taken decades to nurture.

“We never bought these before because all our olives were grown locally and there was never a need to buy them from outside,” says shopkeeper Nashd Hussein, gesturing towards the stacks of Turkish olives.

“But it’s not only the olive trees that IS destroyed here, it was all our fruit trees, along with our agricultural buildings and farming equipment.”

Tal Afar, a countryside town in northern Iraq’s Nineveh province, is predominately inhabited by Iraqi Turkmen. It lies 63km west of Mosul and 52km east of Sinjar, and is strategically close to the Syrian border.

After more than three years under IS control, during which time many inhabitants - particularly from its minority Shia population - fled, Tal Afar was liberated by Iraqi forces in August 2017.

On the outskirts of Tal Afar, farmer Ali Azgar Suloman leads a sad tour around one of his former olive groves, where once-bountiful trees now stand as dry brown skeletons. IS set some olive groves ablaze but they destroyed others, including this one, by poisoning the roots of the trees.

Suloman tenderly steps between the dead trees in the walled olive grove, fretting about the condition of the soil. He understands that IS mostly used oil and petrol to poison the roots of the trees, but worries they could have applied some other, unknown poison that has left the soil permanently contaminated.

“This whole area was olive trees before IS came,” he tells MEE. “Tal Afar was always famous for its olives but almost all our trees were destroyed by IS. Our olive groves are all gone, all destroyed.”

Suloman estimates that local farmers had around 5,000 olive trees just in Tal Afar’s outlying farmland, almost all of which have been killed. A handful of trees in private gardens are all that remain.

In one corner of the olive grove stands his ruined farm machinery that IS also set ablaze. “This was a brand new tractor and I had only driven five kilometres in it,” he says, shaking his head and pointing to the now rusted skeleton of a burned-out tractor.

'They wanted to ruin our future as well as our present'

Farmer Ali Mohammed Saleh had a hard homecoming after the liberation of Tal Afar. Not only had his flock of 640 sheep vanished - taken across the border into Syria, according to a local undercover intelligence officer - but his olive groves of 265 trees were all dead. His farm equipment had been looted, the well he relied on to water his crops had been filled in with rubble and his agricultural buildings had been set ablaze by IS in attempt to conceal militant activities from aerial surveillance.

“Of course I was pleased to come back and happy my family were okay but it was very painful to see my farm like this,” he says. “Everything was so badly damaged, it is very difficult to start farming again but I'm working with my sons and we are trying to fix whatever things we can.”

Mukhtar al-Musawi, the former commander of the Tal Afar-based Brigade 53 of Iraq’s Hashd al-Shaabi (Popular Mobilisation) forces, who was recently elected to the new Iraqi parliament, said IS targeted Tal Afar farmers because between 70 and 80 percent of them were Shia.

He said they wanted to ensure Shia residents never returned and, if they did, they would struggle to rebuild their livelihoods. Tal Afar was famous for its unusual-tasting sweet-sour olives, he said, adding that IS also had a regional plan to force the area to become reliant on imported fruit.

For the region, olive harvests had previously provided a lucrative trade. “Before IS came, I could make between 1.5 million and 2 million dinars [approximately $1,250 to $1,666] per month,” Suloman says. 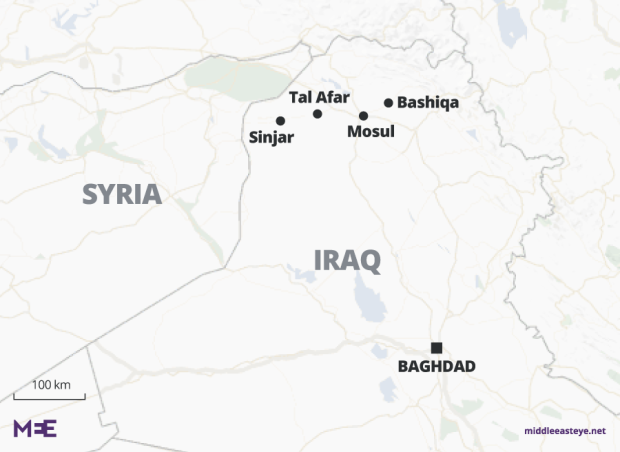 Locals say the destruction of the town’s olive groves and orchards was a deliberate move to prevent people from trying to restart their former livelihoods.

“IS knew this area well and they also knew that the people of this area love olives, so they knew exactly what they were doing by destroying our trees,” Suloman says. “And they also knew the consequences of doing this but they wanted to ruin our future as well as our present.”

A 2011 report about Iraq’s potential to diversify into olive oil production by the United States Agency for International Development (USAID) said that Iraq’s annual olive production was between 10,000 and 12,000 metric tons, not enough to supply its average annual national consumption of 30,000 metric tons.

Noting that most of the country’s 600,000 trees were in Ninevah Province, especially in the Bashiqa area, which is some 100km from Tal Afar, the report said: “Olives are a potentially important cash crop for Iraqi farmers and are attractive because olives can survive and produce fruit in areas with limited water resources.” Bashiqa was also under IS control for two and a half years.

An uncertain future for farmers

For this remote rural population, the fruit trees and agricultural equipment were valuable and costly items that will take a long time to replace.

Suloman says Iraq’s Ministry of Agriculture values the worth of a single olive tree at 25,000 dinars [$19], so the region’s farmers had lost the equivalent of millions of dinars as a result of IS’s destruction of the olive groves.

“It will take around 40 years to properly rebuild the orchards and olive groves here,” Musawi predicted.

He complained of neglect from Iraq’s former government and parliament, which had not offered compensation to local farmers for their lost livelihoods.

“The people here have lost faith in the government because it’s in Baghdad and here we are in a remote rural area,” he said. “The [former] parliament had six members from Tal Afar but, after liberation, not a single one came here to the town to see the situation.”

The burned trees and poisoned land are not the only obstacle facing Tal Afar’s farmers. IS also left the area extensively booby-trapped with mines and IEDs.

“The farmers in and around Tal Afar lost everything under IS, and much of the agricultural land has been left heavily mined so people are afraid to return to their farms,” Musawi said, explaining that the area urgently needed the support of international de-mining groups.

For the farmers of Tal Afar, many of whom are already facing the challenge of rebuilding their homes, damaged by IS or during fighting, the ruinous legacy of IS on their agricultural livelihoods will take decades to repair.

“If I can, I will buy new trees in the future, but I’ve also lost all my equipment and this will take years and years to replace,” Suloman says. “I must have tools because I am a farmer and it’s impossible to work without equipment.”

As dusk falls, he walks back towards his family home, where in his garden two lone, healthy olive trees stand.

“I should have already started this year but I could not. Perhaps next year I will think about how to restart,” he says.

But slow-growing olive trees take years to reach maturity and to start producing decent harvests, and Suloman is already in his 60s. 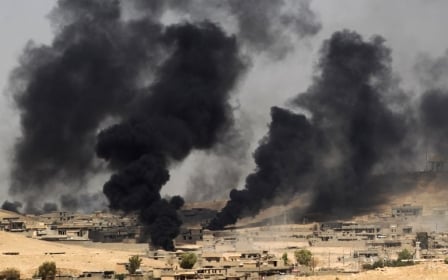 Inside Iraq
'The Baghdad Clock': A novel of Iraqi youth in search of lost time