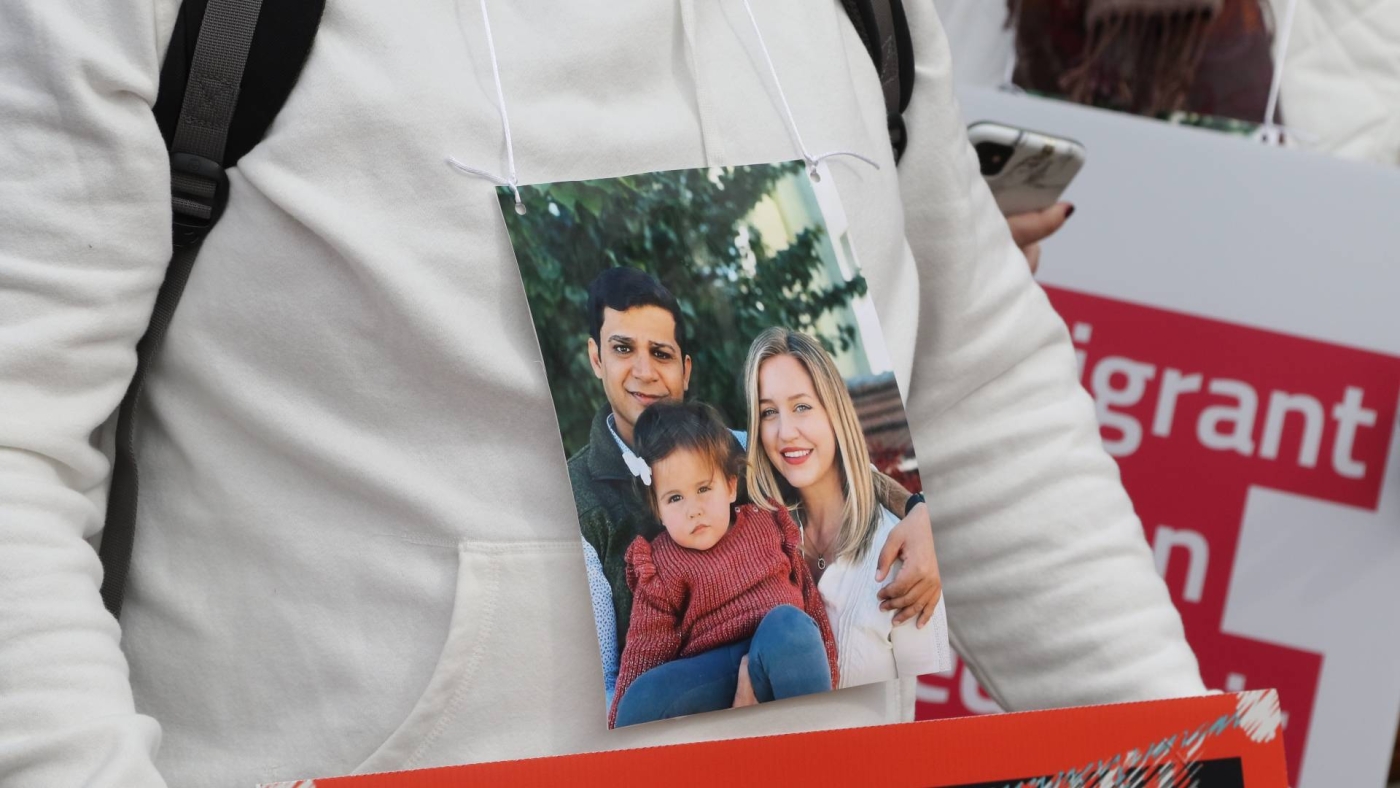 Danial wears a photo of his brother Afshin and his family, who have been barred from coming to the US because of Afshin's mandatory service in the IRGC (MEE/Umar Farooq)
By
Umar A Farooq
in
Washington

Elham Nasrollahi, an Iranian-American physician living in northern Virginia, has spent the last several years in emotional limbo, as her husband has been denied entry into the United States because of his mandatory military service in Iran.

Nasrollahi's spouse, Yaser, who is also a physician in Iran, is a victim of a 2019 decision made by the Trump administration that designated Iran's Islamic Revolutionary Guard Corps (IRGC) as a foreign terrorist organisation (FTO).

'Emotionally, I have been a wreck. This is this is like the worst thing that could ever happen to a couple'

As a result, anyone associated with the group is barred from entering the US, including people like Yaser who were forced to serve in the group under Iranian law

"As a US citizen, I expected that bringing my spouse wasn't going to be an issue for me. However, I was very wrong," Nasrollahi told Middle East Eye.

"Emotionally, I have been a wreck. This is like the worst thing that could ever happen to a couple."

Nasrollahi said that US authorities do not seem to be taking into account the fact that the compulsory service completed by Yaser did not involve any military duties, but rather involved him serving as a doctor for a remote village neighbouring the border with Pakistan. Or that Nasrollahi lived in the village with Yaser during his service.

Nor does it seem to matter that he had served years before the designation was even made.

Like Yaser, hundreds of other Iranian men over the past several years have been denied residency in the US, according to family members in the US who spoke with MEE.

Nasrollahi has spent years reaching out to members of Congress and the US government, but after having no luck she and more than a dozen other Iranian-Americans came to Washington on Saturday to protest in front of the White House, demanding answers.

Holding posters and banners reading "Iranian Americans are not political pawns", the family members of ex-IRGC conscripts stood side-by-side, facing the White House as passersby stopped to take a look at their demonstration, with some even joining in the rally.

"We expect the US government to separate the IRGC draftees from the IRGC members in visa applications. We want them to allow draftees to defend themselves and provide information about their conscription," Nasrollahi said during the demonstration.

"This is what we want, and we expect the US government to listen to us. We are US citizens. We want to be with our families. It is our constitutional right."

Relatives of Iranians who had their two years of mandatory military service in the IRGC say that the way in which US immigration law treats their cases is both unfair and inaccurate.

Under Iranian law, all Iranian men beginning at the age of 18 have to serve between 18 to 24 months of service in one of Iran's military branches. They are not allowed to choose which branch they serve in, and only by serving can they receive a passport and driver's license.

While the US has told these men that they are inadmissible to the country because of their membership with the IRGC, their families note that they are not actually members of the group. 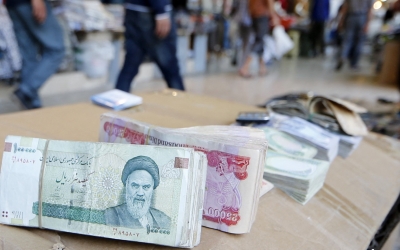 Shadi, whose husband Abbas was conscripted into the IRGC more than two decades ago, said that most individuals selected to serve in the Revolutionary Guards do not serve in combat roles, do not hold any important information, and usually are assigned jobs such as cleaning and other "sorts of free labour".

Tehran even designates that their service is only valid during times of peace, according to Shadi, meaning that if Iran were to enter into a war with another country, they would have to serve again.

"It means they know that these people haven't done any sort of real military service," Shadi said.

Abbas also did not serve in a combat role but rather served in a capacity that matched his profession as an artist. He was assigned duties such as painting walls and completing drawings.

Another former conscript, Afshin, is now living in exile in Turkey because he converted to Christianity, which can lead to discrimination and even detention in Iran according to rights groups.

After being denied a visa to the US for his IRGC service, which consisted of mainly custodial duties, he is no longer able to live in his home country or with his extended family in the US.

"My brother's not even allowed to live in our home country of Iran, because he's not safe there," his brother Daniel told MEE at Saturday's demonstration at Lafayette Square in front of the White House.

When US President Joe Biden entered office last year, immigration advocates breathed a sigh of relief after dealing with four years of the anti-immigrant policies of Donald Trump's administration.

In one of his first acts as president, Biden reversed the controversial Muslim ban, which was enacted by Trump and barred individuals from seven Muslim-majority countries, including Iran, from entering the country.

The Biden administration is also currently in what it has described as the "final stages" of months-long indirect negotiations with Iran to re-enter the 2015 nuclear deal that Trump withdrew the US from.

Yet one year after the ban many families continue to face barriers including massive visa backlogs, continued denial of former diversity visa lottery winners, and also situations like the cases of Iranian men like Yaser, Abbas, and Afshin.

The State Department told MEE that under the Immigration and Nationality Act, any individuals who "engaged in terrorist activity" either through ties to FTOs or providing material support, "are inadmissible to the United States".

'The worst thing was that the Biden administration came, and nothing changed. It's still what it used to be'

"We do not comment on potential deliberations concerning our designations process," a department spokesperson said in an email.

The spokesperson, however, said that "[w]hile there is no process to appeal a nonimmigrant visa decision, individuals denied immigrant visas may provide new, additional evidence to overcome the inadmissibility finding".

But according to Nasrollahi, her family has not been able to find someone in the government willing to take the details of their case into consideration.

"Last year, I was so happy, I thought that, you know, the Biden administration is going to come and fix this. I pulled myself through the Trump administration, I was like, look, if these guys go, our problem is solved," Nasrollahi said.

"The worst thing was that the Biden administration came, and nothing changed. It's still what it used to be, I mean, figuratively, he did lift the [Muslim] ban. But what about literally? Literally, we are still not getting visas."