High unemployment across the region could boost ISIL ranks, as the group seek to establish a far-reaching caliphate 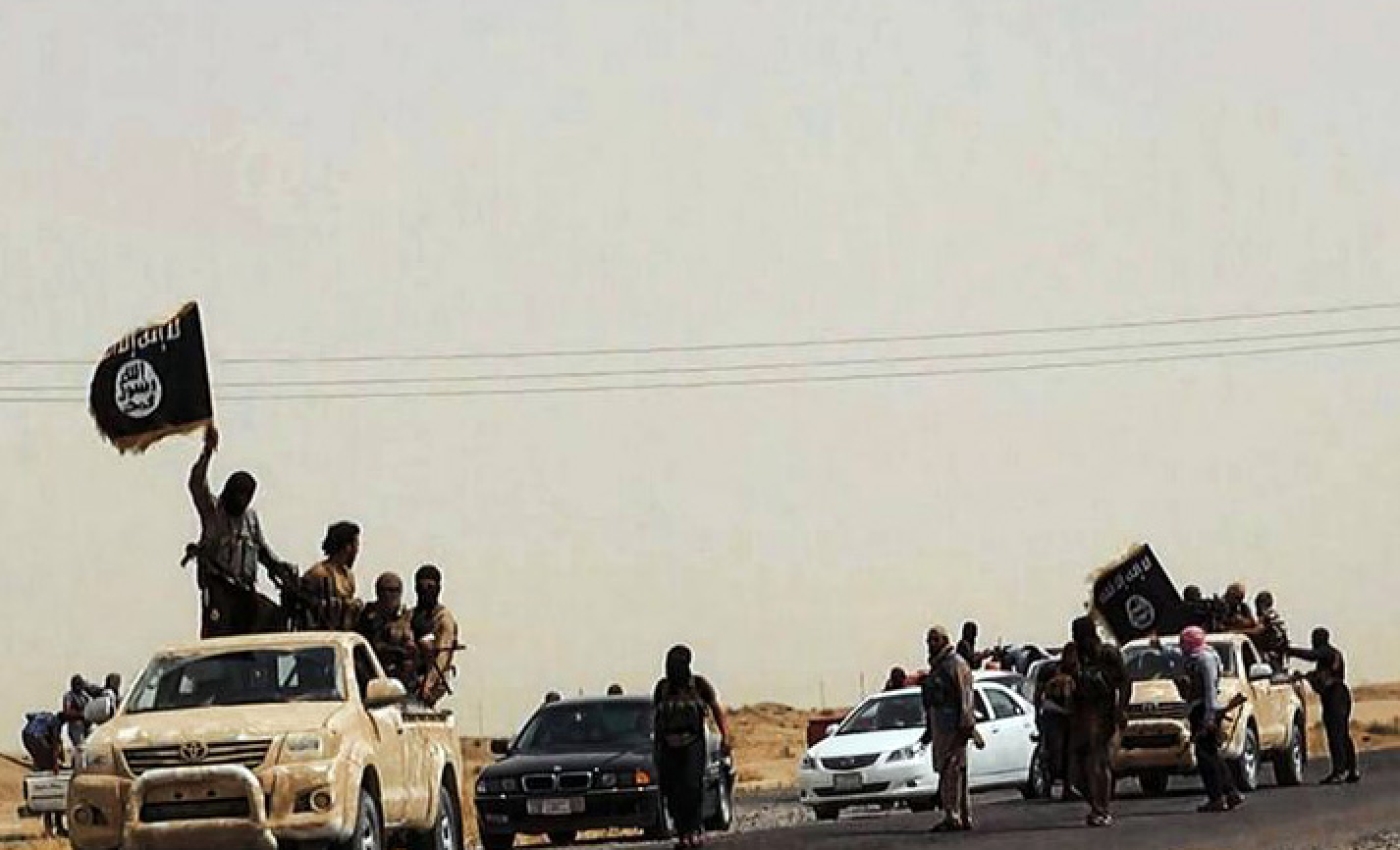 “We will break the barrier of Iraq, Jordan, Lebanon, all the countries Insha’Allah [God willing], until we reach Quds.”

These are the words of a fighter from the Islamic State of Iraq and the Levant (ISIL) in a video posted to YouTube on 29 June celebrating their spoils of war in Iraq by showing off seized army equipment, destroying government buildings and filming a group of terrified Iraqis held in a makeshift prison.

Standing jubilantly on the abandoned border between Syria and Iraq, the Chilean fighter Abu Safiyya declares the destruction of the colonial-era Sykes-Picot borders that established modern-day Iraq, saying “this is the first barrier of many, we are coming Insha’Allah”.

Without buying too much into the propagandistic purposes of the video, which is clearly designed to project ISIL as an all-conquering force, it does raise the question of what expansionist plans the group have in the region and how they intend to go about pursuing their objective of establishing a caliphate.

“The goal is to form an Islamic state consisting of the Levant (Jordan, Lebanon, Palestine and Syria) and the Arabian Peninsula,” says Abu Bakr al-Janab, an Iraqi supporter of ISIL who is now resident in the EU where he translates and distributes the group’s messages on social media.

Referencing a recent ISIL suicide attack on the Duroy Hotel in Beirut Janab says “we will see some serious developments in Lebanon in the near future”, adding “nobody knows what exactly, except the commanders”.

He points to Jordan as another potential hub of ISIL activity, although an attack from the group’s Iraq stronghold is unlikely.

“If something happens in Jordan, it will come from within,” said Janab. “ISIL groups work locally, rather than centrally, and the aim is for these movements to grow organically and join up at a later date to form a contiguous state."

"There is already high unemployment there [in the southern town of Ma'an], a lack of services, and Jordan has become a hub of western intelligence agencies, which has provoked a lot of anti-west sentiments there,” he added.

There has certainly been whispers of support for the group in Jordan and Lebanon, where rallies of a few hundred people have seen ISIL slogans virulently chanted in Beirut and Ma’an, while some analysts have seen the expansion for themselves.

“It’s spreading beyond Iraq and Syria into Lebanon, Jordan and elsewhere,” said Fawaz Gerges, professor of international relations at the London School of Economics. “In Iraq ISIL has been able to capitalise on and manipulate social and sectarian cleavages to recruit many Sunni fighters.”

“For ISIL the approach is local, local, local: you have to have what the jihadists call the popular base,” he added.

In Jordan and Lebanon there exists structural conditions ISIL could exploit to grow their support, with rampant youth unemployment seemingly beyond the capacity of respective governments to tackle.

There is 35 percent youth unemployment in Lebanon, where 45 percent of the population is under the age of 24, according to the National Council for Scientific Research. In the southern town of Ma’an in Jordan there is an unemployment rate of at least 20 percent, which is double the national rate according to the Jordanian Department of Statistics.

The lure of a paid job with ISIL, in which fighters can battle against governments who have failed them, is becoming increasingly appealing according to some analysts.

“Foreign fighters join more for ideological reasons and end up with ISIL because it is the group that is most visible and accommodating for them,” said Thomas Hegghammer, an expert on foreign fighters at the Norwegian Defence Research Establishment. “For locals it is a slightly different story where economic incentives play a role, the fact that ISIL pay salaries matters, and the perception that they are the ‘winning side’.”

“They join for reasons including a lack of redress to social and economic grievances, often feeling mistrustful and angry at authorities in a given area,” he added.

ISIL pay as much as $500 per month to its fighters, according Aaron Zelin of the Washington Institute for Near East Policy, comparing favourably to the minimum wage of $150 per month in Iraq. Electronic evidence seized before the ISIL takeover of Mosul and revealed in The Guardian, suggested the group possesses wealth upwards of $2 billion, dwarfing the budget of al-Qaeda around the time of 9/11 that sat at around $30 million per year.

While the group are bathed in relative riches, with a budget rivalling the annual military spend of the Czech Republic and New Zealand, their territorial gains in Iraq have rapidly expanded their financial burden.

“If you think about the money that ISIL have got, what are the priorities for the use of that money?” asked Tom Keatinge, a former banker at J.P. Morgan who writes and consults on terrorism financing. “Obviously weapons are important to fight the battles but perhaps what sets apart a wealthy insurgent group like ISIL is that they can provide a form of welfare state to people in the areas they control,” he added.

In Syria, where the group have solidified control over certain areas in the north and east, there has been signs of organised governance activity.

“ISIL has focused on building up local proto-governance institutions and social outreach to solidly embed itself in the local human terrain,” said Alex Massimo, an independent observer of jihadist movements and contributor to Vice magazine. “For example, in Syria it runs ‘cub scouts’ training camps for children that combine basic education with military training and global jihadist messaging,” he added.

Their primary currency of the Mujahideen, however, remains of vital importance for a group that has a relatively low number of 10,000 fighters. And with the lure of a salary for many impoverished and unemployed young men, it is likely there will remain a steady flow of soldiers to ISIL from countries such as Jordan and Lebanon.

While ISIL supporters like Janab say we will see the growth of branches across the region, providing a domestic challenge to governments, Keatinge says it is far more likely the group may have reached the extent of their current capacity.

“If you wind back the clock to the beginning of the year ISIL had certain areas under their control in Iraq like ink-spots, such as Fallujah and elsewhere, and what they’ve managed to do over the past month is to very effectively join up these ink-spots,” said Keatinge. “They’ve gone from appearing to be nowhere to suddenly being everywhere and the question is: have they now exploited all those nodes that they control?”

“It would seem as though the general answer is yes and therefore what one would expect to happen now is consolidation across the areas they are operating in,” he added.

Hegghammer agrees that ISIL will most probably seek to establish its authority in newly won territory and should the group attempt to expand its operations this will likely come from land already in its control.

“ISIL has expansionist ambitions but there are limits to how far it can go,” he said. “Any advance will happen contiguous to what they already have, there will not be islands of support in regional countries.”

“It will flow out of existing ISIL controlled territory, as they do not have the military capacity to do this from within other countries,” he added.

As countries from the US to Iran and Israel to Saudi Arabia become unlikely allies in a potential war against ISIL, their strategy appears to be very much focused on a military offensive against a group that gains a proportion of its support from young men among disenfranchised communities.

While it would be reductive to paint ISIL’s ability to recruit as predominantly the result of economic incentives, with religious and political ideological motivations playing a key role for many, it is a social cleavage present in many of their target countries that could prove important for continuing to boost fighter numbers.

In Ma’an political leaders say government has, by failing to alleviate widespread poverty, left some turning to ISIL as a way of communicating their ire.

“The only state services we get are riot police,” Mohammed Abu Saleh told the Washington Post. “The city has been forgotten, there are no jobs, no development, no dignity.”

“Some people use the threat of ISIL to send a message to the regime, we’ve reached the point where the enemy of my enemy is my friend,” he added.

While increased employment opportunities are the ideal scenario, Hegghammer says there can be no room for idealism in a dangerous situation and while governments must improve their relationships among disaffected communities the immediate concern is the perception of injustice.

“There’s nothing in the world you can do to improve employment rates quickly enough to offset recruitment to ISIL in the coming months,” he said. “Economic improvement is a decades long enterprise and so this won’t have an effect on recruitment in the short term, which is the current priority.”

“What matters now is the relative benefits that a group in a society gets compared to another, if everyone is just as poor as each other then that’s less likely to produce conflict than if one group is quite well off and another very well off – that’s more conducive to conflict,” he added.

The reality is that the ISIL situation is a fluid, fast-moving one that involves a multitude of factors and potential outcomes. At the moment, the group has sent shockwaves to Baghdad with its lightning fast offensive across Iraq and given the dire economic situation for many in neighbouring countries its levels of attraction only appear to be growing in the absence of effective governance and a balanced distribution of wealth.